There’s no doubt we live in crazy, troubled times which drives Daniel Bye to produces work that tries to make sense of all the madness but more importantly what we can do to change things.

The writer and performer’s latest work Instructions for Border Crossing initially focuses on a 12-year-old girl without a passport trying to make her way back into her own country watched through surveillance cameras by her own parents.

“It is about border policy, and some of the problems that causes, and is about migrants trying to reach a better life,” says Daniel.  “What it’s really about is a sense of powerlessness felt by a lot of people who feel like they might perhaps want to do something about it, but don’t how to do that or what to do.

“They feel like that in their lives it might be difficult for them to intervene meaningfully in huge, huge global events and we look at the reason people feel like that as well.”

Bye is bringing his new work to West Yorkshire Playhouse as part of their Furnace programme showcasing new and experimental work. Although it might start with a child’s journey like much of Bye’s output it then goes off on tangents as the audience hear the thoughts of semi-mythical activist Edward Shorter, and are actively encouraged to join in at critical points. 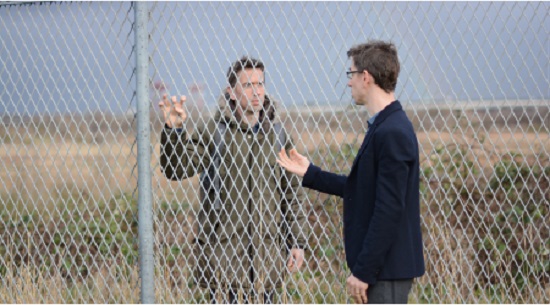 “It’s about all the ways the ways we can participate collectively in creating the world we all live in together, and the show is a participatory experience which I hope doesn’t put anyone off.

“You can join in or not as you wish, but the show does rely on a certain amount of participation. There is a lot of enjoyment for the people who participate, but also if you sit back and enjoy watching the show.”

Bye is an artist who wants his audience to influence the direction of his work on stage and is always looking for new ways to make them think. This time audience members will have a chance to join Bye in a classic parlour game of physical skill and forward thinking.

“Someone comes up and joins me and we play a bit of Jenga which is then played through the course of the show. I’m loathe to reduce Jenga to meaning one simple thing as it means different things at different moments so sometimes it is just a game.

“Something this is about perseverance, sometimes precariousness, or collaboration and sometimes opposition, so it means slightly different things from moment to moment. It gradually becomes more precarious until it collapses and the ruins are part of building the final images of the show.”

As the world has become a crazier place as two spoilt brats with nuclear weapons square off in Asia, Bye’s work has also become more challenging as he explores why many of us remain so passive in a world where Nazis are openly marching round Charlottesville.

“My work fluctuates a little bit so I’ve made work which says we can do something about this if we pull up our sleeves, and are hopefully empowering or galvanising,” muses Bye. “Some of my work is more ‘ah, man this is tough’ which reflects the mood I’m in.

“A couple of years ago I was making quite optimistic shows and I had a real sense of hope. More recently I’ve felt almost a little bit despairing about the world that comes through in the work which is a little darker or bleaker. This show, in particular, brings it all to a head, so it feels like us collectively wrestling with that what we can really do.”

Bye was a student in Leeds and has continued his relationship with the city through the Playhouse where his tour kicks off and who programmed his last show Going Viral. Instructions for Border Crossing began life as a work in progress at the Playhouse, although Bye says not much of that remains in the full realised show.

Bye’s new work is going on tour after a successful run at the Edinburgh Festival, so is he more or less optimistic that we can change the troubled and dangerous world we find ourselves in?

“You know what, loads more optimistic in a number of ways,” smiles Bye. “I’ve been moved by the generosity of people who want to step up to make this show happen and that becomes a metaphor for other things where people might step up to make things happen.  Sometimes they say the most beautiful, brilliant and inspiring things.

“One of the things people enjoyed in Edinburgh, and I hope on tour too, is that sense of space it gives for everyone to offer something, and part of that offer is there is a point where they can really try to break the show if they want to. I love the many and varied ways they accept that invitation, but also people with incredible generosity who also want to make this show work.”

Notes for Border Crossing is at West Yorkshire Playhouse on Friday 15th and Saturday 16th September. To book 0113 2137700 and to find more about Furnace go to www.wyp.org.uk

For tour dates go to www.danielbye.co.uk