A Rock And Rolling Panto at Leeds City Varieties

One of the great joys of panto is the audience participation, and the cast of the Rock ‘n’ Roll panto not only breach the fourth wall, but gleefully smash it down.

Since the historic Leeds City Varieties revived its panto seven years ago the Rock ‘n’ Roll Panto’s lively cast - who are back this season with Aladdin - have built a loyal family audience who come back every year for a festive show with a difference.

“Unlike traditional pantos the 10 actors are all actors/musicians so they all play all the songs coming in and out of the band area,” notes director Matt Aston.  “One minute Abanazar will be casting his spells then he’s back in the band playing guitar solos. The Emperor will be having an argument with his daughter then playing drums on the next song.

One of the most irritating things about a lot of pantos is when they shoehorn in godawful versions of the latest chart hits that have no relation to what is happening onstage. As the title of the show suggests the Rock ‘n’ Roll Panto crew take the opposite approach carefully selecting the 22 songs in the show. 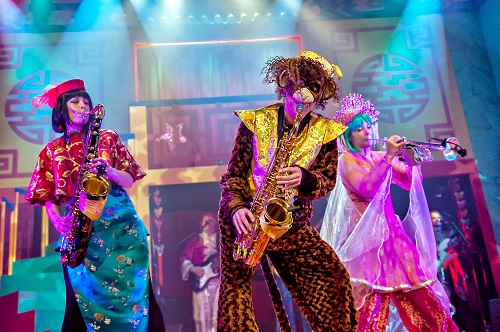 “This year we have all the classics like Born To be Wild and Dancing In The Streets, but we have one that is only three or four years old, so we open with Happy which is more modern, but is a lovely way to start the show. There will be all the classics people can sing along to.

“The music helps to develop the story, and they’re not thrown in when a show just stops so they can have a song, and we feel it is musically very strong this year. You’d be daft not to have traditional crown pleasers and, of course, the City Varieties has its own unique crowd pleasers, the boulders, thrown in every year.”

Another of show’s strengths is that is an old fashioned panto that doesn’t rely on special effects or big star names instead it offers a hard working cast under Aston’s experienced hand who are willing to fall over on a regular basis, and improvise madly when it invariably goes on wrong onstage, much to the delight of the audience,

“It’s important to keep the traditional elements, so there is the Dame, the goodies and baddies plus all the usual’ ‘he’s behind you’ or ’oh do you can’t,  Oh yes you can’,  but the twist is the actor/muso element so Pete Rowe’s script lends itself to that, and he writes with the music in mind.”

City Varieties is a venue steeped in in history as all the greats from Charlie Chaplin to Morecambe and Wise have played there. But it is also one of the last old school music halls left in existence with the relatively small stage, with a sharp slope, offering unique challenges, so how does the director move his big cast round the tiny space?

“With great difficulty,” chuckles Aston.  “The last two years I’ve done this show with a designer Judith Croft, who is like a wizard in terms of creating space.

“One of the things we introduced was the balcony which helps the band get around, and we have built an apron at the front of the stage to create more space. The Varieties is such a wonderful building to work in, and it is remarkable that we have so much space to work in because of Judith’s brilliant design.”

Seven of last year’s cast have returned which is always an indicator of a happy company doing a show they love in a venue that is especially intimate for a panto.

“My favourite sort of theatre is where the audience in your face and the company are really well connected to them. There are some spaces where there is a disconnect between the stage and the audience, but at City Varieties you always have a chance of having a better vibe in the place. Even in the dress circle and the upper circle you still feel part of the show.”