I Have Been Here Before by JB Priestley – Liverpool Network Theatre

I was interested to discover that Liverpool Network Theatre were putting on JB Priestley’s I Have Been Here Before which first premiered in 1937 as it is rarely performed nowadays with most companies opting for his more well-known An Inspector Calls. It is one of Priestley’s ‘time plays’, inspired by Russian mathematician and mystic PD Ouspensky’s theories that whatever happens has already taken place many times over and will do so again – just think Groundhog Day for life.

Director Sonia Chapman was kind enough to meet me to explain why it was time for this play to be seen again. Having chanced across it in a collection of Priestley’s plays, she confides that she could not put it down with the bizarre question at its centre soon set to one side as the reader is drawn into its intriguing narrative where so much is left unsaid and one is left wondering what has taken place outside of the script to get them to this: six characters thrown together to stay in a country inn on the Yorkshire Moors on what at first appears to be pure chance but soon their interconnectedness comes to the fore.

Chapman notes that while the time concept of the play has been overtaken by scientific discovery in the last eighty years, it serves its purpose as a device to bring the characters together and explore an issue that remains relevant today: our quest for meaning in life with the recurring themes in the play of life, death, love, and fate, still resonating strongly, if not more so, in our modern lives as we seek meaning behind our existence and purpose in life. 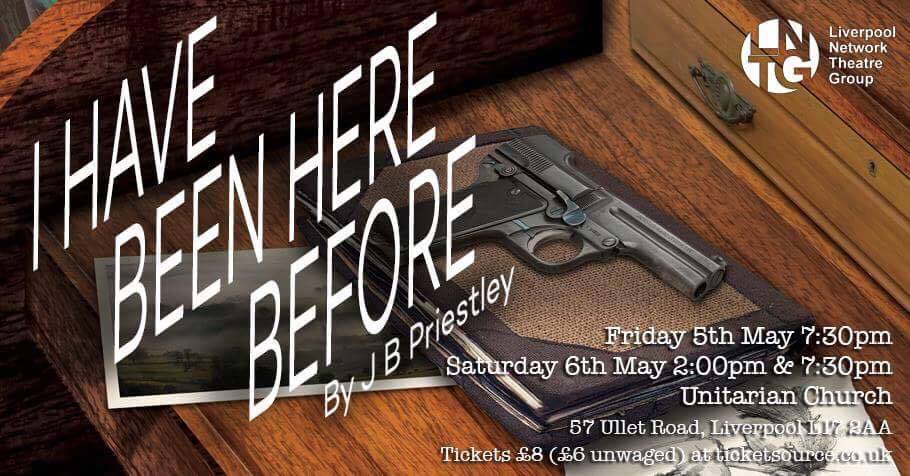 Chapman is keen to add that 1937 represented the beginning of exile to many across Europe and the alternate reaction of characters in the play to a refugee, a German professor, in their midst is analogous to the more recent political overtones of Brexit. Throw in some considerations around free will, choice, and consequences and it’s a tantalising piece. Chapman more modestly hopes the audience will enjoy the drama and get lost in it - I’m already caught.

Chapman is a Network stalwart and is the current treasurer although this is her first directorial role. With a strong background in stage management and production, she found the simplistic staging of the piece, facilitated by the venue, enabled her to focus her attentions on working with an experienced cast, most of whom are new to Network, and fully embrace this new challenge.

Chapman hails from Crosby and following a degree in Psychology from Oxford University, she worked in the voluntary sector as a therapist. Two years ago, she took a leap of faith to work professionally in television and theatre. She is currently taking a step back to get some work-life balance, with her time away having reinforced her desire to return to work as a therapist with its obvious rewards and fulfilment, whilst Network enables her to maintain her theatrical interests. She assures me that whilst she has a great understanding professionally of group dynamics, she has not had to use any of her skills with the great cast and support team assembled for this production. I can tell they are in safe hands.

I Have Been Here Before performs at the Unitarian Church (57 Ullet Road, Liverpool L17 2AA) on Friday 5th May at 7.30pm and on Saturday 6th May at 2.00pm and 7.30pm. Tickets are priced at £8 (£6 concessions) and available from www.ticketsource.co.uk/liverpoolnetworktheatre