Featuring the songs of Joe Hill, Bread & Roses is a new play by award-winning writer Ian Kershaw, based on the real-life story of the huge mill workers strike - led, and won, by women - in Lawrence, Massachusetts, USA, in 1912.

Bread & Roses is an uplifting new play about hope; it follows the story of Lucy-Rose Atkins as she navigates the strike, facing love, loss, lies and deceit, and using her fierce intelligence to make the journey from unskilled worker to impassioned leader.

On 11th January 1912 the weaving room of the Everett Mill fell silent as mill workers opened their pay envelopes to discover their weekly wages had been cut. A new state law in Massachusetts had reduced the workweek for women and children from 56 hours to 54 hours and the mill owners had reduced their wages. Under the circumstances the workers were faced with, the reduction of two hour’s wage was the difference between the ability to feed their families and going hungry. Word of the strike by the women of Everett Mill spread and the walkout cascaded through neighbouring mills and by the end of the next day more than 10,000 workers were out on strike. 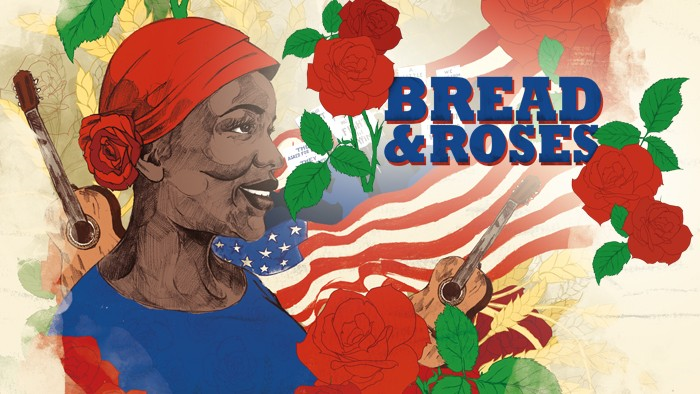 The Lawrence strike of 1912 became known known as the Bread & Roses Strike and The Singing Strike. Songs by Joe Hill, published in the Industrial Workers of the World’s (IWW) Little Red Songbook were sung out across the picket lines. Joe Hill was a Swedish immigrant who joined the IWW to protest and change unjust treatment. His songs, including There is Power in a Union, The Preacher and the Slave and Everybody’s Joining It inspired the likes of Bob Dylan, Bruce Springsteen and Billy Bragg.

Director Amanda Huxtable makes her Coliseum debut. Amanda is Artistic Associate at Hull Truck Theatre as part of Arts Council England’s Change Makers and Co-Artistic director of Hidden Gems Productions. Her previous work includes Just An Ordinary Lawyer by Tayo Aluko and Wondr by Poppy Burton-Morgan for Metta Theatre. The cast for Bread & Roses includes two former Coronation Street stars playing real-life historical characters: Rupert Hill (Jamie Baldwin) as Joe Ettor, one of the leading public faces of the IWW and Tupele Dorgu (Kelly Crabtree) as Elizabeth Gurley Flynn, who was a full time organiser for the IWW and travelled to Lawrence in 1912 for the strike.

Writer Ian Kershaw won the Royal Exchange Theatre’s Bruntwood Prize for Playwriting with Candyland in 2005. His other theatre credits include The Mist in the Mirror, Star-Cross’d and Union Street at the Coliseum and Get Ken Barlow at Watford Palace Theatre. Television credits include Coronation Street, Shameless and Holby City.

The Bread & Roses strike united workers from over 40 different countries and lasted for two months. It was the first large-scale industrial strike in the USA with workers stepping away from their machines and onto the picket lines to fight for their right to earn enough money to live. These issues are still prevalent in modern day Britain; The End of Year Statistics from the Trussell Trust state that in the year 2017-18 over a million three-day emergency food supplies were given to people in crisis, the main reason for referral to the foodbanks was low income.