Liverpool Network Theatre Group (LNTG) are well into rehearsals for their forthcoming summer production of one of Shakespeare’s most popular plays, As You Like It, which is being staged at several venues around the city. I was pleased to catch up with director Frank Kennedy, Donna Day, Chair of LNTG and performing in this production, and Production Manager James Gray.

This is a play all about sibling rivalry: Duke Senior and his younger brother, Frederick, who has usurped his older brother’s position and banished him to the Forest of Arden. Then we have Orlando, who is in love with Rosalind, whose brother Oliver is forever trying to kill him off, eventually forcing Orlando to flee to the forest. Rosalind is the daughter of Duke Senior and good friends with Celia, daughter of Duke Frederick, but when she too is banished, she takes on the guise of Ganymede to discover whether Orlando’s love for her is true. 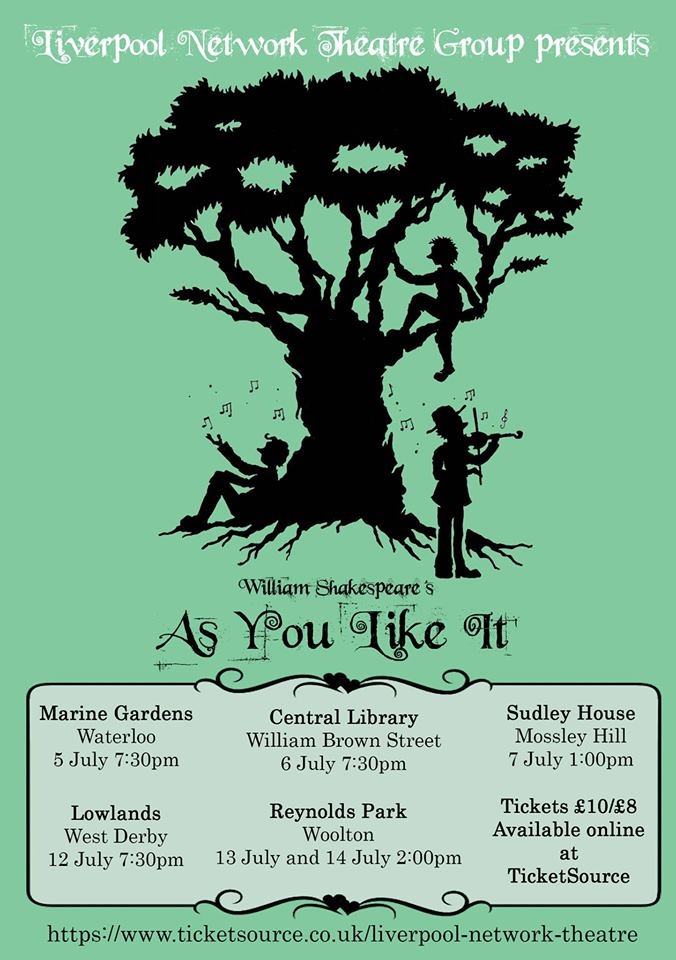 As Kennedy notes, there’s a lot of falling in love and posting of love letters going on, so throw in a couple of clowns and we have a real merry-go-round of entertainment on offer before wrongs can be righted and a happy-ever-after can ensue in this delightful comedy.

LNTG has a long history going back to 1980s although Kennedy adds he hasn’t been around that long! He got involved in 2001 when it was reinventing its traditions and his first production was this very play: it feels like the circle has been well and truly formed.

Day is in her first year as Chair and has continued traditions such as the weekly Tuesday workshops – that I would highly recommend to all actors, budding and seasoned – which has helped consolidate a group to give them all a chance to feature in this production: community theatre at its best. She has also overseen the introduction of ‘Short But Sweet’ to showcase new writing evenings as a permanent fixture on the LNTG calendar alongside the 3-4 productions that are delivered each year.

Gray has taken on the heavy mantle of Production Manager but does so with a charming smile. He’s a LNTG stalwart and been a safe and supporting pair of hands for many a year. Whilst the challenge of performing in five very different venues has pushed his coordination skills to their limit, the welcome back with open arms he has received from all of them gave him all the necessary encouragement needed to pull the respective strands together with stage manager Liana Jane Bourne. He is also keen to acknowledge the wonderful assistance from Julie Hills with costumes for what is the largest LNTG cast to date.

Based on the enthusiasm from these three and the assembling cast tonight, I can tell you this production is going to be exactly as one would like it: I can’t wait.

Tickets are priced at £10.00 (Concessions £8.00) plus booking fee and are available from https://www.ticketsource.co.uk/liverpool-network-theatre

Liverpool Network Theatre Group was formally set up in 1984, born out of the idea of theatre as a political force, with the power to change society for the better. Further details on the group including upcoming productions, rehearsals and workshops can be found on their website www.liverpoolnetworktheatre.org.uk