A festival of incredible hip hop dance and project in association Sadler's Wells. Breakin' Convention brings the best and the brightest from around the globe and also from around the corner. The level as to which all the performers displayed through dance was immense, a diverse and all-inclusive show that entertains audiences of all ages and backgrounds.

Hosted by Jonzi D (Founder and Artistic Director of Breakin' Convention) - he was perfect in his likability and it was shown of his passion and drive for the project and the love of the culture and bringing it to a wider demographic. Jonzi was joined by Jay Madden, a Blackpool based artist, who also displayed an enthusiasm to bringing his hop to all. 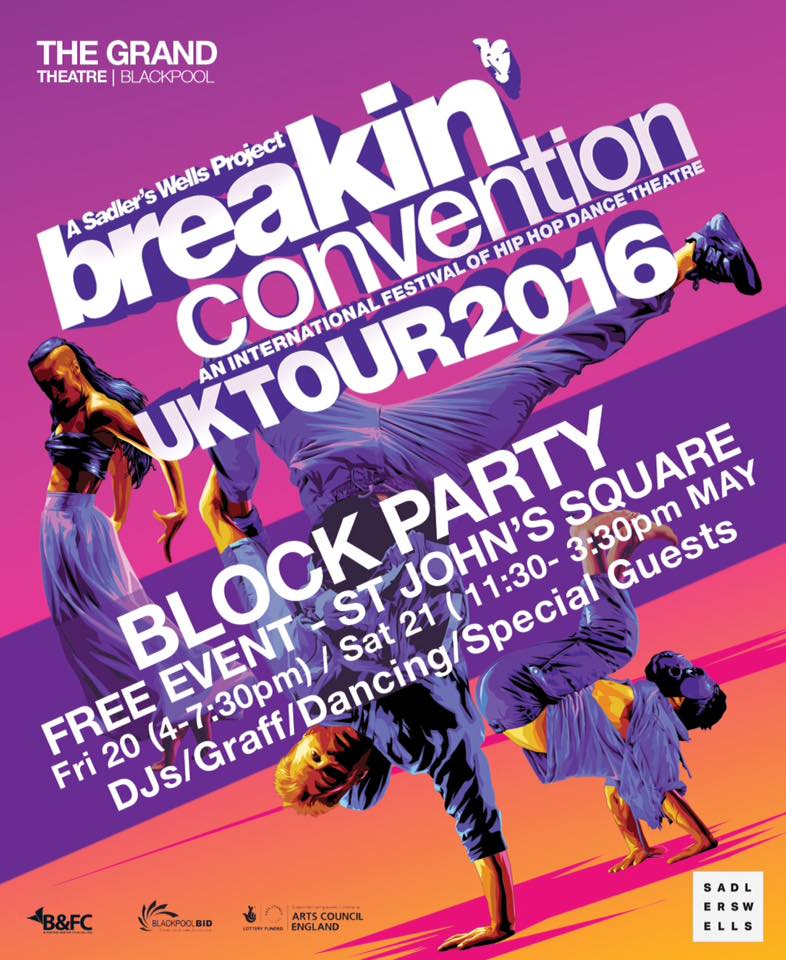 The evening started with wonderfully talented young company named FY Wingz, who brought a tremendous amount of energy and excitement to kick of this show! Also infusing Shakespeare's Romeo and Juliet through music, the piece also being named 'Two Households'. Continuing on, a modern and thought provoking piece named 'Persistence' - it's described as an "exciting journey of struggle, while remaining strong" (Performed by Chad Taylor). Following that another younger group, with the help from some very talented tribal drummers, Urban Dance Project combines tribal music with inventive and innovative choreography. Ending the first half was a dance company from Spain, named Iron Skulls Co, set in a post-apocalyptic world filled with people trying to survive life. The piece named 'Sinestesia' was extremely experimental but terrifically haunting, also being very imaginative in their lighting choices which worked brilliantly.

Beginning the second act, Blackpool hip hop stars FreeFly Crew who blended comedy, hip hop, theater and acrobatics all into one sensation performance- big support from the crowds and a real star of the night. Also, tremendous beat boxing which really questioned what can't these boys do? Moving on to Compagnie Antoinette Gomis from France. An extraordinarily moving performance filled to the brim with emotion and passion- impressive popping and locking integrated with the classic and gorgeous voice of Nina Simone. The piece focused on the injustice of black women in particular and the lack of pride given.  A truly exploitative and mesmerizing performance. Finishing off this incredible show could have been daunting but thankfully not for The Ruggeds from the Netherlands, a piece devised around 'Adrenaline'- an energy induced performance filled with as many flips, tricks and pops that you could imagine. Also, including humour that made the perfect ending.

A tremendous, thrilling and exciting show filled with the stars of today, tomorrow and future. I would attend this event ever single year! And hope for its return in the not so distant future.