Entering the Royal Court for Shout - The MOD Musical guests were greeted by a row of vintage scooters from Liverpool Scooter Club and crowds of men in parkers and I thought that was setting the tone for the show. I expected The Who, The Kinks, The Jam but I was very wrong. What I saw was full on Girl Power, 1960s style and it was wonderful.

Shout is the story of five stereotyped women who all read the same magazine, Shout, through the 1960s and all write to the magazines advice columnist for help with their love life. Red Girl, played by Sarah Folwell is the innocent geek of the group, Orange Girl, Emily Chesterton, the homemaker, Blue Girl, Hayley Hampson is the narcissist while Miriam O’Briens Green Girl is the promiscuous one leaving Yellow Girl, played by Evangeline Pickerill as the American fangirl in London. All these girls live in different areas of swinging England but all rely on Shout Magazine and agony Aunt Gwendolyn Holmes, played by Katie Tyler, for help throughout the decade. The advice these girls in need get from Holmes includes get a new hairstyle, paint your nails or get on with it!

The girl’s lives are played out through the songs of the 60s. These aren't the obvious songs of the decade though. There isn't a Beatles, Rolling Stones or Elvis song to be heard. What there is though is the female voice. Dusty Springfield, Petula Clarke, Cilla Black, Lulu and Mary Hopkins were all features as well as a brilliant version of Shirley Bassey’s Goldfinger. 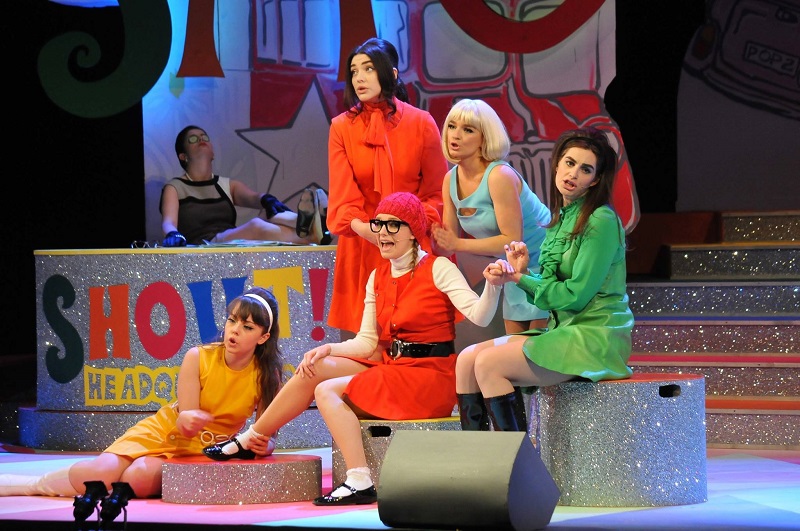 The six female cast did not deliver a bad note the whole night. Vocally all were close to perfect. When Pikerill sang Lulu’s Shout the person next to me commented to his guest that he thought it was better than the original and both myself and my guest could not agree more. I kept trying to find a favourite and found it impossible because all of the performances were so strong. Hampson and Chesterton’s duet in the second act gave me visions of Dickson and Paige their performance was so impressive. Folwell’s Red Girl was faultless in both comedic timing and vocal strength while O’Brien’s Green Girl delivered most of the laugh out loud moments during this fun, flirty, lighthearted evening.

The only male member of the cast is Michael Starke who plays The Voice of Shout, delivering articles and advertisements from the different editions of the magazine which act almost as ad breaks between the songs or tales of the girls.

It’s not just the talent of the actors that was truly impressive. The set was beautiful and the actors were superbly supported by the four talented musicians who accompanied each song and even served as additional characters when needed.

Possibly the most remarkable thing though is that the cast, the musicians, choreographer, producer, director, in fact everyone except costume and sound design graduated from Liverpool Institute of Performing Arts, LIPA. If this sparkling, empowering, female lead production is anything to go by, the future stars coming from LIPA could provide an incredible mark on the musical theatre world.

By the end, everyone had laughed, cried, sang and danced. Shout - The MOD Musical is a wonderful show with an incredible cast that will leave you feeling energised and happy. It really is a must see.