Blind Man’s Song is part of the annual Physical Fest happening at the Unity Theatre, Liverpool from the 20th-28th May. It is a haunting and beguiling wordless tale centred around a blind man and his imaginings.

We begin in almost silence, all we hear are the labored breaths of the blind man, tenderly clutching a green handkerchief. He uses his walking stick to survey the sparsely decorated room, consisting of a metal bed and a piano. He moves with faltering steps tapping out a rhythm with his stick on the floor and finally the bed - this sound reverberates around the stage and begins to loop. The blind man moves to the piano and his song begins.

What follows is a patchwork of physical theatre, live musical performance, mime, dance and magic. The emotional arc of the narrative ebbs and flows from the ethereal, sinister nature of a faceless man and woman, played by Guillaume Pigé and Selma Roth, to moments of humour, wit and sweetness; with elements of pathos and insecurity, verging on insanity. The personification of the blind man’s song, exquisitely performed and composed by Alex Judd - who also takes on the role of the Blind Man of the title; comes to life in the sixty minute vision that appears before us. 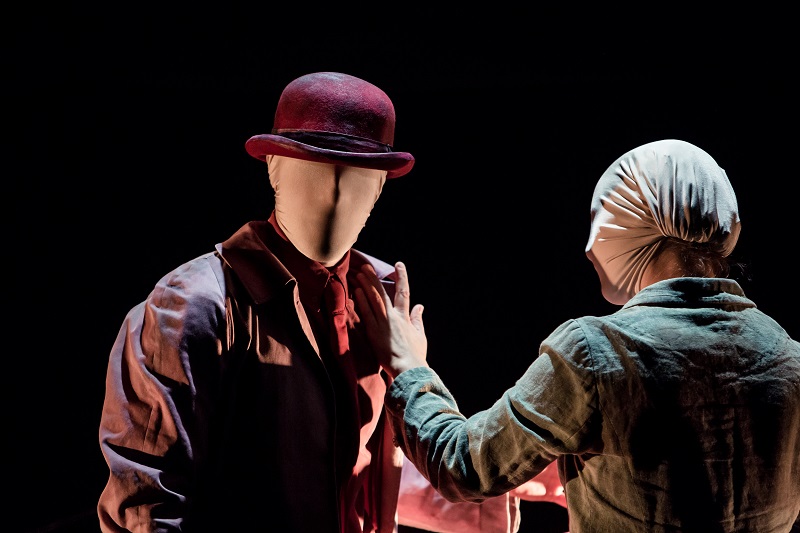 But are these mere imaginings or are they visions: from a place of mental instability, or the sheer loneliness of a man locked in darkness inside four small walls? Alternatively, is the green handkerchief a gift or memento from a past love, one that is lost or unrequited - the memories of what was, or thoughts of what could have been, played out in his imagination, projected on to the stage? Whatever interpretation you bring to the piece you can’t help to be drawn into their interactions and physical conversations, all without words.

Throughout the piece I found myself caught in visions and memories of my own making, as the music and imagery evoked verses from my own life song. It was a deeply affecting and beautiful meander through memory and imagination. It had form but yet was not completely corporeal; it was otherworldly, mystifying, but yet personal and present. A very special piece of narrative physical theatre.

It was created by the critically acclaimed Theatre Re, conceived and directed by Guillaume Pigé and devised by the company, with the assistance of A.C. Smith. The excellent lighting was designed by Katherine Graham, costumes and props by Malik Ibheis and the set was built by Peter Bennett.