Last night was my second visit to the Mechanics’ Theatre to watch the students of Wakefield College. This time it was to see Nigel William’s stage adaptation of the famous novel Lord of the Flies by William Golding. The first professional production of William’s adaptation was in 1995 by The Royal Shakespeare Company and it has gone on to be performed worldwide, often used as a popular GCSE Drama text for its haunting themes and reflection of human nature. Last night’s performance was part of Wakefield College’s Summer Season of Theatre, Dance and Music. The cast consisted of level 3 year 1 actors of the college and they definitely managed to leave an impression on the audience at the end of the dark tale.

The play is set in an unconfirmed time period, during what seems to be a large nuclear war. It follows the descent of a group of ordinary school boys during their time stranded on a desert island due to an attack along their journey. The boys suspect all of the ‘grown ups’ are dead, so begin to assign authority amongst themselves in order to survive. The majority of these school boys appear never to have encountered each other before, but within time loyalty and gangs start to appear in their social organisation. The theme of morality and immorality is highlighted throughout the performance as the elected leader Ralph (Bradley Westwood-Welsh) starts to crumble under the pressure and wannabe leader Jack (Benjamin Sykes) is happy to fill the role, with a slightly different outlook on their situation. Contrasts in human nature are pivotal within the plot of Lord of the Flies with Ralph concerned about attracting help and supporting the younger boys, whilst Jack parallels the human nature to hunt and lead, for the ultimate gain of power. 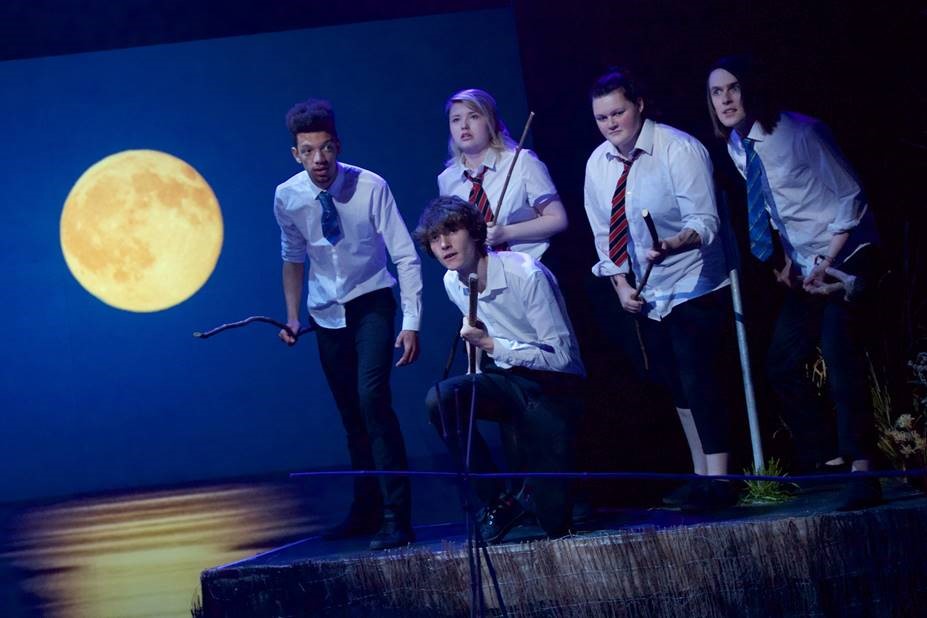 Welsh gained my attention from the minute he walked on stage, with his shirt out, hopeless look on his face and absolute wonder at seeing the sun so clearly. His innocent character was communicated in his comedic first scene with his new, nervous friend Piggy (Billy Pickup). The simple, youthful energy between these two roles worked extremely well to introduce their want for order, support and most importantly, rescue. This provided the contrast for when Jack and his new recruits arrived to meet the boys. Sykes obviously enjoyed playing this dominating character as his physical commitment to role was strong during each moment on stage, thus providing the pressuring nature of the role. From my seat on the second to back row it was, at times difficult to follow the plot due to moments of rushed speech, and weaker diction. However, this often added to the childlike roles on stage, just unfortunately confused some of the critical content. Overall, the physicality of the characters and group dynamics was definitely the strength of the cast. The attack on the ‘beast’ Sophie (Savannah Shariff) was by far the most powerful moment, with the pace and exaggeration control shown by the actors benefiting the moment enormously.

Within the small cast of eleven, the strongest actors really stood out to the audience members amongst the simple staging and scenery. Pickup showed a real effort to approach the protective nature of Piggy, even during his more vulnerable moments under attack from the other boys. Tyrone Pringle relished in his role of the aggressive Roger, and communicated to me his long to be leader being swamped by his underlying fear of Jack. The students showed admirable commitment and enthusiasm for their performance last night, and I can understand the hard work that went into this powerful production. The levelled staging and projected backdrop provided a suitable setting for this deserted island, and really benefitted the overbearing physicality of some of the characters on stage. I wish the students the best of luck in all of their future productions.