I have recently seen a few productions produced by Northampton's Royal And Derngate, and they have once again provided us with a very Curate's Eggish production. When it was good, it was superb, but when it wasn't it was distinctly mediocre.

One of the biggest problems with King Lear is knowing when to set the play. As with majority of Shakespeare plays produced in our time, director and producer decide not to set them in the period in which they were written, usually modernising and transporting to different countries etc. As I have written countless times before, and no doubt will continue to do so, I am no fan of this bastardisation and manipulation of our great Bard. In fact the director should only really consider such a change if he has something relevant to say and can make it all the more poignantly by so doing, otherwise, let us see the play in the period it was intended to be performed in.

With King Lear this is not so easy since Lear was not a real King and as such have no idea of the historical era. This is usually circumnavigated by the general all-encompassing Middle Ages and this seems to suit. What doesn't suit however is updating the play into the 20th century, specifically the 1940s, without rime or reason. Did doing this add anything to the play that wasn't there before? Did doing this make it any more real, relevant or poignant? Did the director have something specific to say about the troubles of Lear and the troubles of the 1940s and we were able to or supposed to draw parallels? The answer to all of these questions is quite simply no. Therefore, it simply did not work. However, by doing this the director creates more problems for himself. Why would suited gentlemen in the 1940s be carrying knives and swords and choose to fight each other with these weapons? They wouldn't. Would a man be placed in the stocks? Or would a King have a Court Jester to entertain him in the Britain of the 1940s; no, of course he wouldn't. So, by setting the play in such a period, you are asking the audience to make even greater and more unnatural leaps of suspending their disbelief. 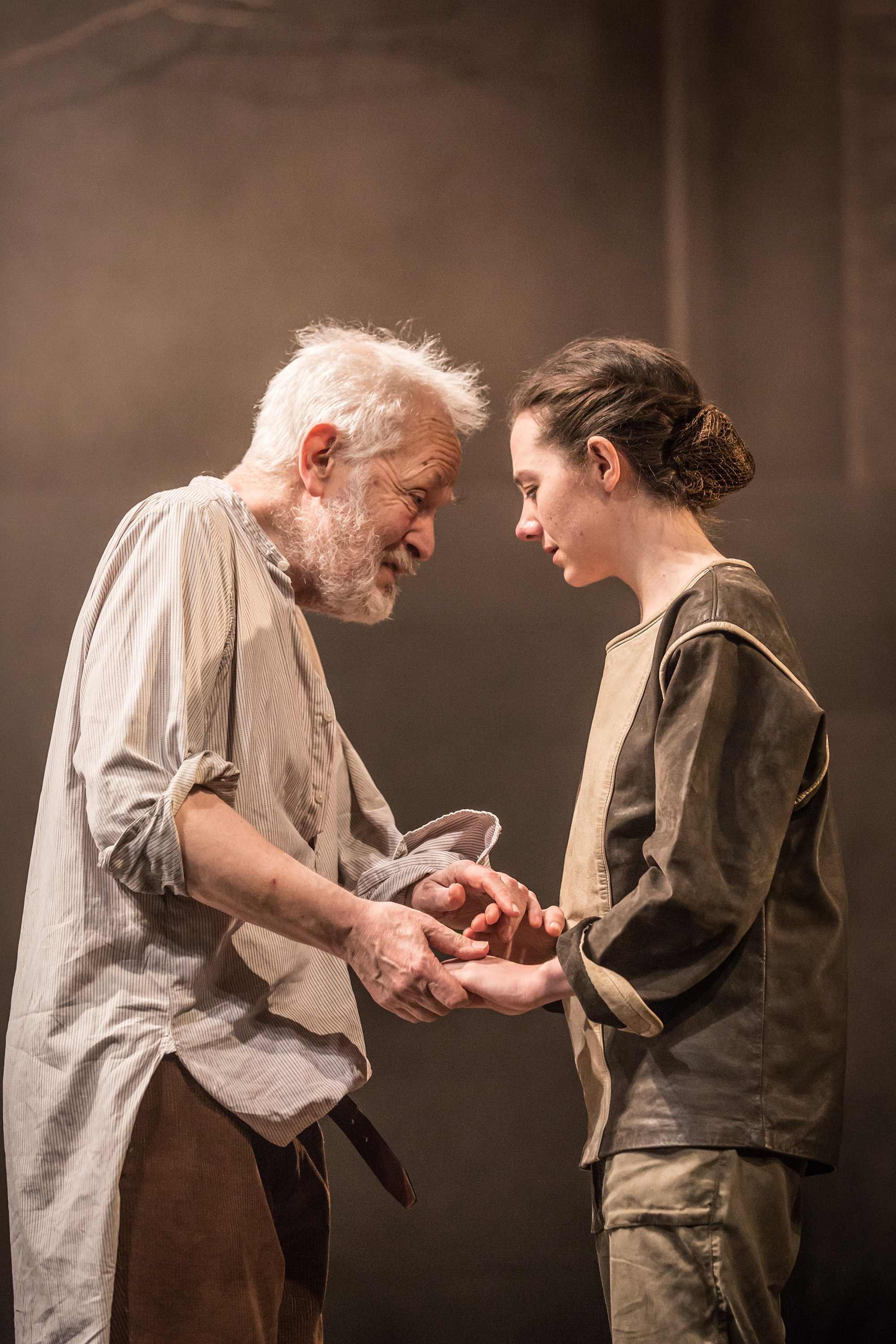 A playwright writes a play in a specific era for a reason, and therefore that should be adhered to. Of course it can be argued that the themes of Lear are universal and of any era; but that same argument can be made of many plays! Take Schaffer's Equus for example, I have yet to see a production of that set in Medieval England!

With all of the above in mind, then I also found the accents a little strange. Again, with Shakespeare it has become somewhat common practice to speak in what has become termed RP (received pronunciation). This basically means that the voice should be as much without recognisable accent as possible. Once called The Queen's English or BBC English, this 'accent' has been favoured for the speaking of classical dramas and works perfectly. That is, of course, until those who are speaking in RP are overshadowed and drowned out by those who aren't. It is an old and wearisome strategy to have the upperclasses speaking RP and the lower ones in local dialects and accents; and such a device works well enough for TV sitcoms and theatrical comedy; however here we were treated to a whole bunch of multifarious British accent with only a small handful speaking RP, and this was obfuscating the dialogue and meaning. It wasn't even a Northern Broadsides production where everyone would have an accent and all accents would be similar. No, this was much broader than that, and again, fell flat because of it.

The second thing which really did not help this production to shine was the set and lighting. The set, thanks to Adrian Linford, was simplistic, dark and uninspiring. Not only that, the few and minimalistic changes made really weren't worth the trouble. I have seen many a production of King Lear in my time, but have never been so negative about a set before. This set did nothing for the play at all. It added nothing, nor did it reflect the moods, themes or even settings of the play. Indoors and outdoors were all the same, as were France, England and goodness knows where else. A bare stage would have worked better.

Costumes and small set items were all in keeping with the chosen period. The token perambulator and wheelchair just to remind us. However, the biggest cringe-worthy moment in the whole play for me was Cordelia's return to England from France. For this we see Cordelia dressed in breeches and a man's shirt, standing defiantly in front of a French flag, looking something like a modern day Joan of Arc preparing to sing 'Do You Hear The People Sing' from Les Misérables!

The lighting, and for this we must thank Natasha Chivers, was poor in the extreme. In almost every scene there were unwanted shadows; bodies partially lit and black spots where actors would stand and find that their faces were not lit fully or even at all and so moved a little further in order to stand in the light. We were given no difference between day and night, inside or out, or even Winter and Summer. We were given wind, thunder and lightning and plenty of snow for the storm scene, but then the following scenes taking place indoors had a lovely carpet of snow to contend with as well.

Finally, before moving to the acting, my last wish last night was that I could have heard all the cast equally well. I was sitting quite close to the front in the stalls and so there should not have been any problems with their audibility surely? But why then was I straining to hear some whilst I could hear even the quietest whisper from Lear, Fool, Edgar and Edmund? Were the actors failing to project sufficiently or were the mic levels not balanced?

This is Michael Pennington's second outing as Lear. Sadly I didn't see his first, but I would dearly have loved to after watching him last night. His performance was indeed stunning. The balance between madness and recognition of that madness played sublimely. For me, Richard Briers still reigns as my all-time favourite Lear, but Pennington has come in last night as a very close second. There have been enough superlatives bandied around about Pennington's Lear already by others far more knowledgeable than I, so suffice to say that I was able to empathise with Lear last night in a way I seldom can when seeing this play.

Pennington was supported by some truly fine actors and actresses. Pip Donaghy gave us an upstanding and faultless portrayal of Gloucester; Adrian Irvine, a wonderfully real and measured Albany; and Tom McGovern a really truthful and masterly performance as Edgar. Two characters who failed to impress at the start but as they got their teeth into the action, and indeed as power and greed go the better of them, so did their performances ameliorate. These were Catherine Bailey as Gonerill and Sally Scott as Regan.

The unmentioned characters were for me, those who were the 'mediocre' in my aforementioned Curate's Egg.

In conclusion then, I would say that this is a very powerful and heartfelt production starring one of the best actors of our time in one of the most insipid productions of this play of our time.

It's also a very long play - even with the cuts and changes - and so to avoid audience clock-watching and leaving early, disturbing others, as they did last night, perhaps an earlier starting time would be preferable?