When I took my 10 year old nephew to a show that was ‘Suitable for children aged 8+’, I hadn’t expected to cry. But I did. A shameful amount in fact. And I’m not even sorry.

Let’s take it back to the start. The audience walks in to a single man sat on the stage, playing guitar. (Side note: this performance was shockingly poorly attended! The entire audience fit on one row and frankly, everyone else missed out). He was dressed in bright green trousers, wearing a flat cap, and had a loop peddle, and a laptop on a table next to him.

The actual set was rather ingenious, particularly when considering the target demographic. A structure was built from a load of square titles, giving a pixelated look that wasn’t far off Minecraft. There were four different sized screens on the back of the structure which were used seamlessly throughout the one-man show to create a mood.

Daniel Bye is the man at the centre of the action, and his way of interacting with the audience, as well as acting out scenes made him instantly engaging. The children were asked to think of names for the characters, (which Daniel did really well to remember!) and activities, which was them “programming” the story. 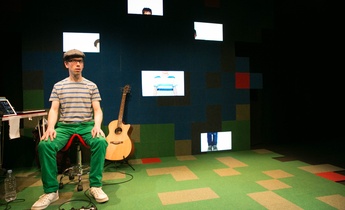 The story itself was one of the most honest, raw and intense pieces of theatre I have seen, for child or adult. Starting off with the question of “how do we know who or what is real?” (which I’m not ashamed to say had me panicking just a little!), the story follows a boy, who for this version is called Jack, and his best friend Simon. When Simon and his family are (spoiler alert), killed in a fire (!), Jack’s Mum creates a robot to help cheer Jack up.

After an accident involving a rather awful girl and the robot, Jack’s Mum rebuilds him, but this time, makes him look and behaving just like Simon. The question is asked whether a robot can be a real friend, and as the story progresses, we are asked to decide whether robot Simon should be turned off, or if it is healthy for Jack to be best friends with a robot version of his dead friend… Like I said, it was pretty deep!

At first I was worried about the subject matter, but looking around at the children who seemed to be absolutely enthralled, I came around. Who says children’s theatre should be just silly and funny? Why can’t it be thought-provoking as well? Although it was heavy, Daniel did a fantastic job of making it fun and enjoyable too. His physicality made you feel as though you could see everything that was happening, and he changed seamlessly from character, to character.

The clever use of music and a loop pedal created an atmosphere and was even used to help us know who was talking. The screens were clever, with the character’s name, which had been chosen moments before, appearing on a door sign, and child-like drawings being used to show scene changes.

This was the best piece of children’s theatre I have ever seen, and I can only hope Polka Theatre go on to create even bigger, and better things in the future.