The only other stage versions of this Musical I had seen up until now had been huge West End transfer shows which starred a certain egoistic and demanding performer meaning that certain songs were given to him, and the storyline changed slightly to accommodate this. So it was wonderful to see the Musical performed as it was written originally for the film.

However, that being said, I don't remember the other productions being rather slow off the ground and lacking a certain pizzazz. Some of the scenes, especially the dialogue-heavy ones were a little laboured in this production, and maybe, just maybe because it was so hot in the theatre, the lack of pace and slickness could be put down to that. However, in my mind, this can only be put down to the fact that the cast were given too much to do and too much was expected of them from the off.

A full-scale Musical using only 12 people. Can it be done? Well, the Octagon has just proved that it can - but I am of the opinion that the Musical suffered as a consequence. These 12 not only had to act, sing and dance their socks off, executing some of the quickest changes in the business, but also were the on-stage orchestra too. They also became stage-hands bringing on and taking off the small set items and props, and were in charge of technical things like moving mics for the rain sequence etc. 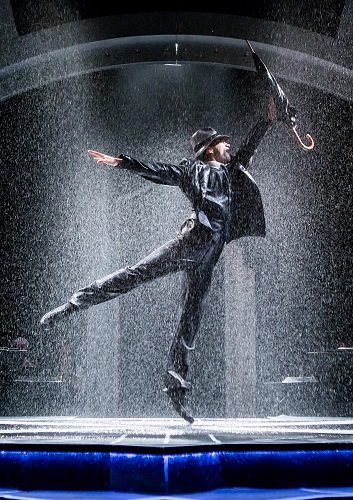 I really liked the set. (Ciaran Bagnall). A three-tiered circular dais centre with a curtained entrance back centre, with the band either side. Above all of this on each of the three sides of the thrust stage setting, a 'cinema' screen, which also hid the water jets. It was all very beautifully decorated and looked very authentic art-deco 1920s, with the 'iconic' omnipresent lamppost, and some period-looking on-stage lamps. (theatre lights). But again, the design of the set, and its smallness were also inhibitive to the choreography, and those sitting on the first few rows would have had to stain their necks to see the screens above them.

For those that don't know the story and haven't seen the truly famous and fabulous film yet.. (are there such people??).. then the story basically revolves around two silent film stars who attempt to make the transition into talkies. The female of the pair has a rather distinctive and off-putting voice and accent which would simply go against her on-screen image and so the studio decide her voice be dubbed with that of a young actress the male star falls head over heels in love with. There are complications and disasters, but of course, this is a Musical, and the good guys always win and there is a happy ending!

Director, Elizabeth Newman, certainly understood the show and the characters, bringing out the maximum from each performer, but it would still have been better if we had had a band and a cast as two separate entities. Seeing cast standing on stage with a musical instrument in their hands when clearly they wouldn't under normal circumstances looks wrong and simply doesn't work for me. Also sometimes I felt as if the comedy was forced, and I do think more humour could have been made of certain sequences. I liked the cinema screen though and that worked really well. (If seated high enough to be more on a level with it like I was ). As I have already intimated, then given a larger and less 'dangerous' space in which to work, the choreography could have been a little more exciting - especially in the 'Make 'Em Laugh' and 'Broadway Melody' sequences, but I was still veritably impressed with what choreographer Sian Williams did manage to do. Although in reading the programme I find that all the tap sequences were devised and choreographed by the cast themselves - so credit to them too! 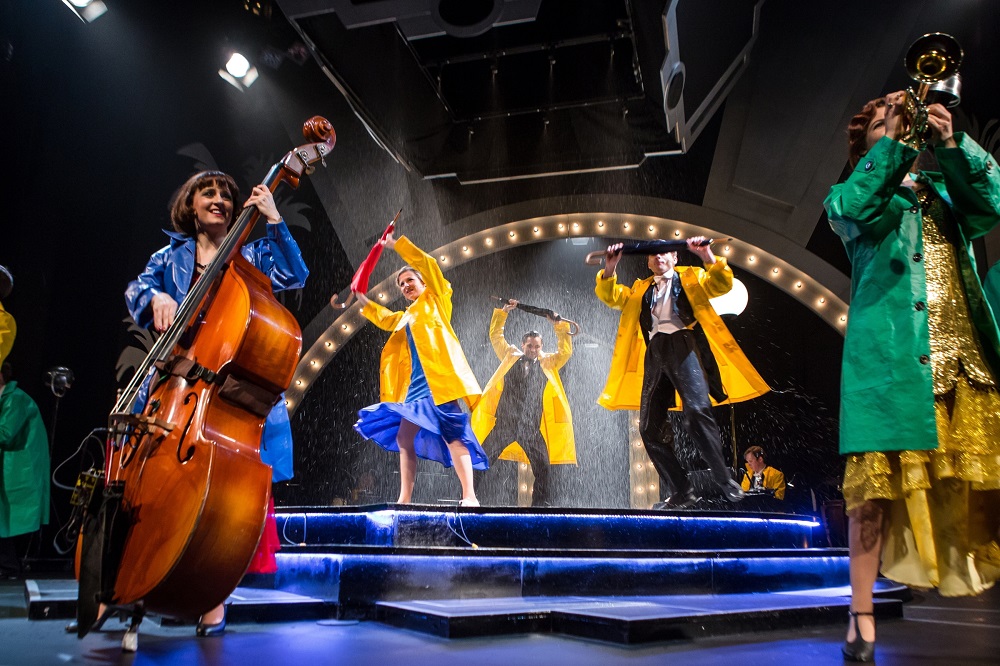 Of course, the success of this Musical though stands or falls on only one thing. Such is the power of cinema, and such a wonderful and memorable sequence was Gene Kelly's song and dance routine that nothing short of brilliant would have been acceptable. Happily I am very pleased to report that the Singing In The Rain sequence did not disappoint on any level. I'll say no more, but the front two rows of audience were provided with plastic rain Macs which they were well advised to wear!

The four protagonists worked excellently together and I enjoyed their performances greatly. Matthew Croke gave us a very believable and dashing star performance as the silent film Matinee Idol, Don Lockwood; whose flexibility seemingly knew no bounds, as he jumped and leapt all over the set with athletic grace. [ I would truly have hated to have had to have been the one to do the Risk Assessment for this show! ]. Together with life-long friend and dancing companion Cosmo, played by Christian Edwards, they brought some much needed life and energy to their dance routines, and the show.

Don Lockwood's on screen romance and co-star - the ditzy blonde with a high-pitched drawl - Lina Lamont, was played with glee by Sarah Vezmar; whilst the perfect foil and complete opposite; the demure and un-starry girl with talent, Kathy Selden, was given a very human touch by Eleanor Brown.

A highly multi-talented cast, and these four had great support from all. The actors gave their best and provided a very entertaining and enjoyable show, it just never really quite reached that 'wow' factor. {There were also a couple of technical hiccoughs too involving mic sound levels and a late starting second act}.