‘Under Milk Wood (semi – skimmed)’ is a sixty five minute, one man play; a cut version of the full length radio play by Dylan Thomas. Standing in blue pinstripe pyjamas on top of a chair Guy Masterson began with the narrator, describing the village of Llareggub (bugger all backwards) at night. His wonderful, crisp, articulate voice, complete with Welsh accent, flowed over Dylan Thomas’ beautiful words, the repetitions and alliterations clear and pleasing to listen to. This version of the play is, as Masterson describes it, ‘a whirlwind tour of Llareggub’ but the cut version is perfect in length, especially as a one man show. Long enough to get to know the characters but short enough to stay engaged with the roles.

Stand out personalities included the Reverend Jenkins and the beautiful morning sermon, showing his love for the village. Masterson was able to stand in the spotlight and just using his words, create a real picture of the place he was describing. The rivers and hills and small details all came to life. Inspired by Steven Berkoff, Masterson uses not just his voice but also his body to create the characters from this radio play. This was especially evident with Mr. and Mrs. Pugh. Mr. Pugh, a school master who dreams of murdering his wife but never does. 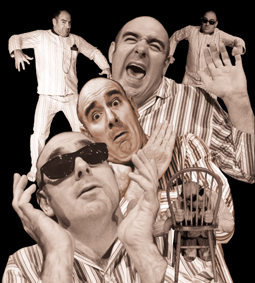 For him Masterson created a hunched over character with wide eyes and for Mrs. Pugh a woman constantly looking down her nose, who had a hand gesture, almost as if she was drumming her fingers together waiting for her husband to do something wrong. The finest character creation by Masterson was Captain Cat, an old, blind sea captain. With the addition of dark sunglasses, Masterson had a completely different persona. Captain Cat’s story of his lost love Rosie was especially heart breaking. Masterson was able to – simply by sitting on a chair and switching between the two characters of Captain Cat and Rosie – create a massive feeling of loss and nostalgia and display a whole history between two people. As well as tender moments, the performance was very comical with lots of laughs.

The original music and sound by Matt Clifford created the world by the use of sound effects. However, he also used music at some points to differentiate between characters. This was very helpful and could have been used more frequently. The lighting was also used well creating different spots on stage, separating the characters with more definition. Again this could have been used more frequently, however, perhaps in a bigger space with more lights this may be possible.

Masterson’s performance was a real treat and took the audience on a complete tour of the small Welsh village. He was able to keep his accent specific to the area, whilst changing it to fit each character, switching between old and young, male and female with absolute ease. It was a complete delight for the eyes, ears and imagination.