Mark Storer's unique and visual style is known to the Royal Exchange, since his production of Puffball there in 2014. It is following on from that, and a subsequent conversation he had with the Royal Exchange's Artistic Director, Sarah Frankcom, that has lead to this new piece of theatre, Little Sister.

Performed on the main stage, but only for 4 nights, this is a devised community project lead by Storer. Using members of the local community, victims of abuse who have been forced in their own lives to remain silent in order to survive, to work alongside a professional cellist, aerialist and clown to produce a work which is highly visual and lies somewhere between Physical Theatre and Fine Art.

To produce this piece Storer took as his starting point The Little Sister, a lesser known Fairytale by The Brothers Grimm. The story is told in many different versions, but the basic concept is that a young girl has several older brothers who have been put under an enchanted spell which has turned them into swans. In order for them to be returned to their human form again she must knit them all shirts made from nettles and must be utterly silent for the next seven years. If she is to utter a single sound then the brothers will remain swans forever. In the version of the story which seems to be closest to Storer's adaptation, the sister is burned at the stake, and yet still she utters not one sound, and as she dies the feathers come from the brothers and they are human again. 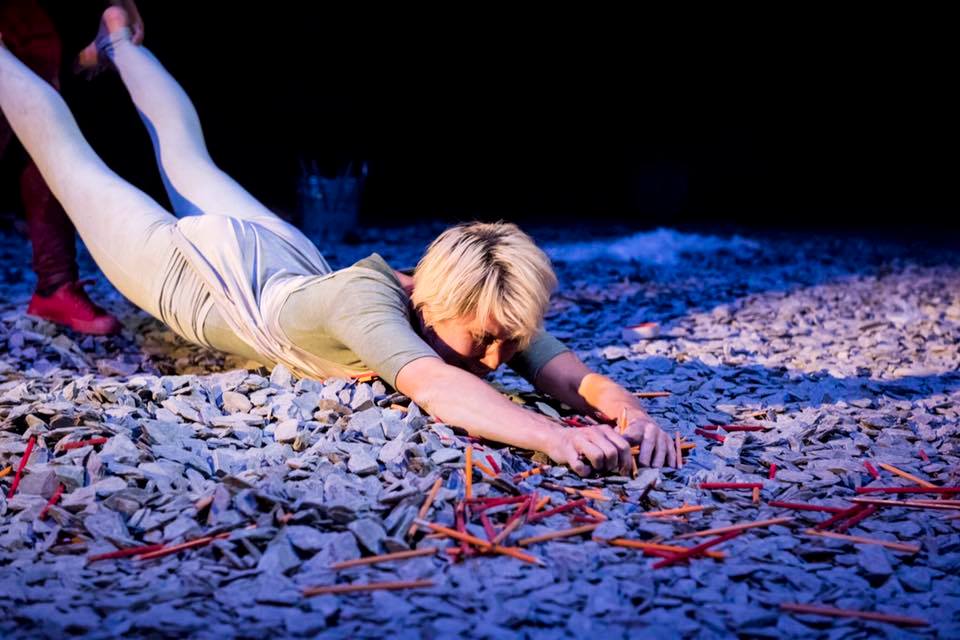 In a piece of theatre lasting 100 minutes without interval, the audience are taken on a journey of imagination and discovery as we are shown various small 'happenings' which are seemingly unconnected and although not a single word is spoken throughout, (except one performer sings a song on an upturned bucket, and another gives instruction whilst on a flying harness), there is a feeling of cohesiveness and a mutual trust and understanding between the performers. Indeed there is a huge amount of trust, not only required by performers but also audience too, as the set is created from slate shale and there is a great deal of it, which creeps nearer and nearer the front rows as the play progresses, and the performers are acting at times quite dangerously close to us too. The rope the aerialist uses is not in the centre but frighteningly near the side, and when she drops a whole metal bucket full of metal cutlery they simple go anywhere! I would certainly hate to have to do a Risk Assessment for this production. I would also hate to have to be Stage Management, having to clean and rearrange all the slate pieces again for each performance.

However the piece does explore with heartfelt sincerity the themes of silence, survival and love / trust, and you do most certainly get the feeling that this is a very noble piece of theatre, performed truthfully. That notwithstanding, I also had to ask myself if I was being entertained, and did this piece work as a piece of theatre which challenged me, or one which I felt excited or changed by? Sadly the answer to these questions was a resounding no. The whole piece was extremely disjointed and slow-moving, never leaving first gear the whole time. Combined with the lack of dialogue and languorous movement and music accompaniment the images created failed to stimulate; it just became boring. This is most definitely not something for everyone. It is a niche-market piece of live creativity which obviously has its place, I am very uncertain however, whether that place should have been the main stage of one of the north of England's flagship theatres.