The comedy started even before Martin Daniels took to the stage as the audience were asked to move seats from the back to fill in the empty spaces at the front and then it became like musical chairs as several of the original ticket holders arrived to find their seats occupied! As Daniels joked, it was necessary to make it look like there was an audience.... The numbers in the theatre may have been lacking but the entertainment certainly wasn't. Daniels ability to bring any situation into his act from latecomers, to people going to the bar or toilets, shows his quick wit without causing any embarrassment to those he picks on. And to pick on people is what he is good at, during the evening several audience members join him on the stage to assist with his magic tricks.

Upon learning their occupations he makes incredibly funny observations about their jobs and hilariously links them together which tonight include a teacher, a van driver, a tax inspector, office worker and a guy who does a 'bit of this and that'. Daniels has a relaxed and easy manner and there is an instant rapport with the audience. If he thought we didn't laugh enough at the right moments or clap loud enough his comments only made it funnier. 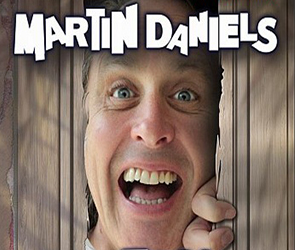 As the son of the late great magician Paul Daniels, he had a good mentor from a very early age and it is no surprise that he too is skilled in the art of magic. Apart from appearing alongside his father on many occasions, Daniels has appeared in several TV productions including as presenter for two series of 'Game For A Laugh' , a frequent guest on the 'Les Dennis Laughter Show' and five times on the Children's Royal Variety Show. He regularly entertains aboard cruise ships and performs in pantomimes.

The Martin Daniels Comedy Show is suitable for all ages, its clean and funny humour, a few magic skills thrown in and if you don't want to be picked on....leave those front seats clear, but then again the theatre might just move you into them!!! I am sadly for comedians, one of those who rarely laugh out loud, tonight was an exception and I know that I will be there in the audience when Daniels returns..... Let’s hope that is soon. On a prudent play of his fathers' well known catchphrase 'You'll like this, not a lot.'........ I can only say, 'You'll like this, a lot, a lot, a lot!'