Tracks, written and directed by Emma Trow tells the story of homeless men and women. I was unsure what to expect but I was amazed and felt each actor portrayed their role with such realism and commitment.

The performance space was small with lots of cardboard boxes and rubbish littered on stage, the audience was also small which showed the intimacy and helped us gain an insight of the characters’ lives. I also felt that the staging separated us, the rich audience and ‘Weather Girl’ (Lori-Jane McLare) who was situated behind the audience reading her book aloud, from the homelessness and suffering we were about to witness on stage. It expressed how removed we as a society can be from homelessness when it is something which we can see every day when going into Manchester, where this play was set.

The play begins with each character telling their story of how they ended up homeless with ‘Jen’ (Emily Deamer) being an orphan. We also learn of ‘OD’s’ (Colin Burnicle) past which connects him with brother and sister ‘Dimitri’ (Joshua Lewindon) and ‘Luca’ (Holly Russell.) The conviction ‘OD’ had throughout the play was incredible. The next song shows a train scene where ‘Weather Girl’ and ‘Luca’ meet on the train, and ‘Weather Girl’ helps her read her job interview leaflet. The two characters realise at this point that there are similarities and differences between them, and that the only thing separating them are ‘windows and doors.’ 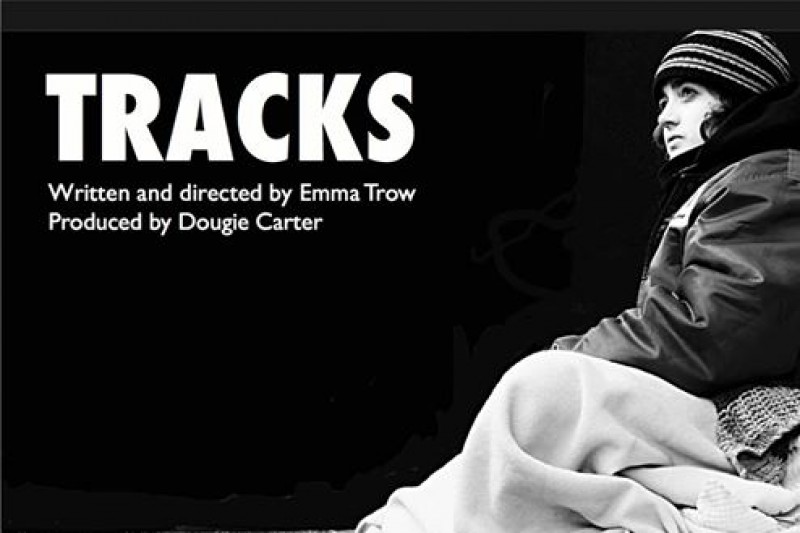 We are then introduced to stammering ‘Terrorist’ (Paul Connor McArthur,) who wants to cause a war and start an army so that then everyone will be equal. I thought the reasoning behind this idea was interesting, as the rich would then have nothing and be equal to the homeless. The first half of the play ends with a bomb exploding, with the cast spread out lying on the floor.

The second half of the play followed by a change of seating plan, with the chairs scattered in the audience to show realistically that a bomb had hit the city. We now see prim and proper ‘Weather Girl’ being dragged on stage bruised and bloody, where they are situated in the remains of Victoria Station. ‘Jen’ now feels a sense of liberation and that she can be whoever she wants to be now she is finally alone and I thoroughly enjoyed her beautiful singing voice that described all the things she could now be.

One of the many highlights of the play however was when ‘Dimitri’ tried to rescue a crying ‘Luca’ from under the boxes, who had her hand out but instead his character grabbed an audience members hand, therefore including us as if we too were just amongst the rubble and many dead bodies. An intense bit followed where I would like to congratulate ‘OD’ and ‘Dimitri’ as this involved the two characters staring each other down and was held for quite a long time, neither blinked once as I closely watched them.

The play ends with ‘Weather girl’ finding more bombs, and eventually she blows the whole camp up. The whole play was ominous and I have never heard an audience so silent and focussed on the action taking place. As audience members you felt involved with the story, made to feel guilty when ‘Luca’ told ‘Jen’ that we ‘didn’t care.’ These characters all had their own special stories of how they ended up in this situation, and it was important to view them as humans and not just ‘specks’ as we were reminded. A very interesting and thought provoking play, which I couldn’t recommend enough.

All proceeds from the musical will go to the Barnabus charity in Manchester. Further details of this charity based in the city along with details of how you can donate can be found at http://www.barnabus-manchester.org.uk/