The play Brassed Off in this adaptation by Paul Allen, is based on the 1996 film of the same name, which in turn was based on a true story; so no wonder many of the characters and instances in this play feel so close to home.

It is 1994, and already the mining communities have suffered strikes, closures and hardships, and now Arthur Scargill is fighting a losing battle and a sense of impending doom hangs over the colliery workers of the small mining town of Grimley, as their very existence and future hangs in the balance. As the women protest, the men work. The women organise a committee, and the men drown their sorrows at the local pub and play in the brass band.

The set is minimalist: 2 flats showing the doors to the four main characters' houses and at the back and centre, a large omnipresent pit head, complete with rotating head wheel and a shaft lift. Smaller items were brought in each time for each scene which became wearisome and predictable; some, like the hotel bedroom realistic and some requiring a leap of the audience's imagination such as the hospital ward. Seeing the stage hands constantly walking on even before the blackout was off-putting. Why not have had them wear miner's gear and pit helmets to scene change? 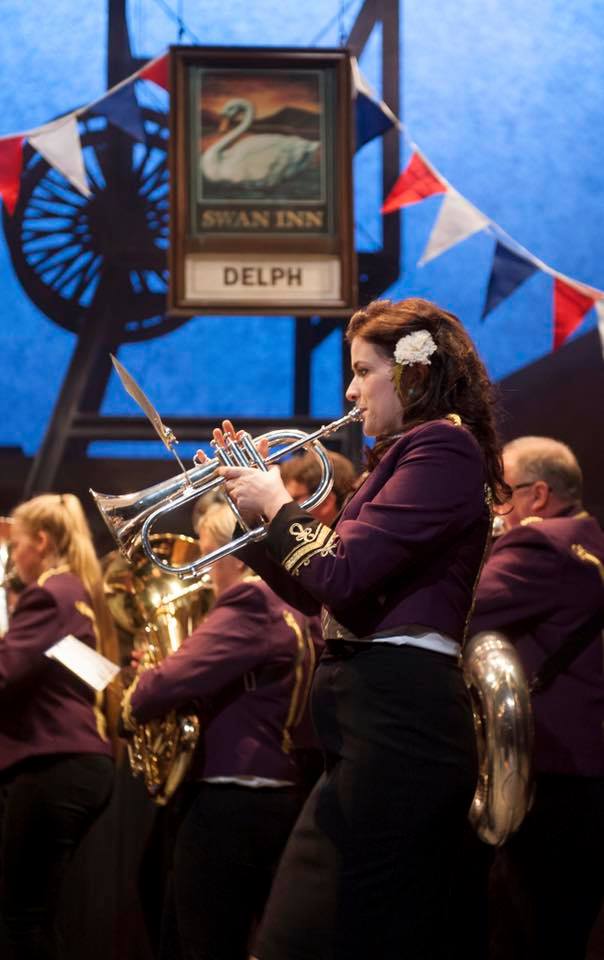 The play revolves around three main storylines, which inevitably all intertwine with each other and become one. Firstly we see Phil, excellently portrayed by Paul Barnhill, as he struggles with more and more adversity. He is a miner with a family of four children to feed, and a trombonist in the band. We see, as the play progresses, that he becomes torn between his love and admiration for his band leader father and his own love of playing in the band, his duties and responsibilities as a dad and husband, and the camaraderie and solidarity of being a miner. Ultimately, he loses everything, or at least he believes he has, and his attempted suicide on the pit scaffold is a poignant and moving reminder of the effect political decisions have on the common man. The second story comes from Phil's dad, (Ged McKenna) the conductor of the brass band; who although very ill and aware of his own mortality, struggles and fights to keep the band going and pushes them into the semi-finals of the National Brass Band competition. He dreams and hopes of nothing more wonderful than winning first prize and performing at the Albert Hall; and finally, we see the start of a romance between miner and band member Andy (George Brockbanks) and Gloria (Rachael Garnett). Gloria was born in Grimley but left to go to London and better herself. She has a job, a good job, and has been sent back to her home town to write a report on the viability of Grimley pit. Her research shows that the pit is profitable, and although she is always seen as an outsider and an enemy, since she is working for the opposition, she still, because of her excellent flugelhorn skills, joins the band and shares their hopes and dreams of winning the title. The love affair between her and Andy we understand is doomed from the start, however we are all rooting for them.

But this should not have been a maudlin tragedy or melodrama. Far from it. There is humour in many of the lines and an upbeat feel to the show despite all the tragedy! So why did this production drag its heels and never leave 2nd gear all evening? The dialogue felt laboured at times and the actors actually looked bored too. This should have been sparkling and uplifting patriotism to stir the soul..... How the town can face adversity and pull through despite all the odds being against them is a true tale of community spirit; but somehow, sad to report, the spark was most definitely not there this evening.

The play calls for a real brass band to play live on stage too; and this should be not only a crow-pleaser but act as an emotion coil to pull at the heart strings and mirror the moods of the actors and their situations. I have no idea which of the brass bands on rotation played this evening, and yes, I am aware that they are an amateur community band, but even with a very long stretch of the imagination there was no way they would have gone to the finals and won them at The Royal Albert Hall. Sorry. Further, there would certainly not have been any women in the band in 1994 - in fact that fact and dialogue had very cleverly been cut from the script - since the whole point of the story and of the band is that it was a band formed by the colliery workers themselves - all male. Having women playing in the band already made a mockery of Gloria's entrance and acceptance in the band, and lessened the storyline because of this. Indeed, The Grimethorpe Colliery Band themselves - the inspiration for the 1996 film only allowed the first female to join their ranks in 2010! I was also left wondering why Garnett played her solo Rodrigo's Concierto De Orangejuice so badly. This was either because she really could not play it well or she was deliberately playing badly. Either way, I didn't understand the reason for this, she should have been excellent.

Another thing which I don't like about this or any other adaptation is the fact that the eldest of Phil's children - the ten year old Shane is played by an adult while the other children are just that, children. Moreover, he is a kind of ever-present narrator figure, jumping in and out of the story. It was confusing and unnecessary.

The direction by Kevin Shaw I found flat and unimaginative. Even the excellent acting and wonderfully real characters with their comedic banter of 'double-act' Harry (Howard Chadwick) and Jim (John Elkington) couldn't overcome this. That's a pity since these two were, for me at least, the most real and fully-rounded characters in the play.

Brassed Off should celebrate the power of music and the capacity of the human spirit to inspire the community to triumph against all the odds; and sadly I was brassed off that this didn't happen tonight! I can only hope that as the run progresses the cast are allowed to pick the pace up and eject some life into their endeavours and the dialogue and music are allowed to sparkle in spite of or even despite of everything falling apart around them.