First performed at the Vaudeville Theatre, London on 3 April 2014 this show lasts around 2 hours 10 minutes including the interval.

Set in the opulent Buckingham Palace, the show focuses on the reputed ‘difficult’ relationship between the longest serving monarch and Britain's first female Prime Minister.

The stage is set up cleverly but in minimalistic style, based on a bold image of the Palace punctuated with the union flag at the time of the 2012 Jubilee celebrations.

The show starts with Mrs Thatcher (portrayed by Kate Fahy - who boasts Holby City amongst her many TV roles), delivering her opening speech. She is joined after on stage by Her Majesty the Queen (Susie Blake - of Coronation Street fame) who also gives a speech. Some slight sound issues (buzzing speakers) at times slightly distracted from what was being said.

Then enter Liz (a younger Queen, played by Emma Handy - another Holby City star) and Mags (the younger Mrs Thatcher - played by Sanchia McCormack who lists Eastenders amongst her TV Roles). They are then joined on stage by the brilliant Asif Khan (Actor 1) who has appeared in numerous TV roles including Spooks and Richard Teverson (Actor 2) from Downton Abbey series 3 and 6. The two actors switch between numerous characters to keep the plot moving along.

The show is packed with witty one liners mainly delivered beautifully by Susie Blake. Khan and Teverson also have plenty of wit to share with all.

This is a well written show by Moira Buffini that is equally well directed by Indhu Rubasingham, supported by the grand yet minimalist design of Richard Kent. Lighting is provided by Oliver Fenwick with Carolyn Downing as the sound designer.

All in all this show gives a funny history lesson in relation to the running of the country under Mrs Thatcher, and what might have gone on behind the closed doors of Buckingham Palace during those weekly meeting between the PM and The Queen. A show suitable for all ages and I would recommend all to see it. 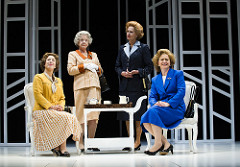