In a professional capacity I always enjoy a show that has a good story, talented cast and (obviously my tastes are more for musicals) great music to help the story flow, however as well as being a campaigner for LGBT rights I also love a show that is camp, full of sparkle and riddled with comedy. Priscilla (Queen of the Desert, to give its full title as any queen rightfully deserves) fulfils that in bundles (nope, he’s a character from another musical!).

Brought to the forefront of the world on the silver screen with the likes of Hugo Weaving, Guy Pearce, Terence Stamp playing the iconic leads in the 1994 motion picture, this story of a trio of drag queens who embark on their journey down under from Sydney to Alice Springs whilst playfully attempting to entertain and getting themselves into a spot of trouble along the way, rings true to the many members of the LGBT community having to hide their identities due to the risk of inacceptance. Even the Internet’s description of the show still describes them as just ‘cross-dressers’!

When Tick (aka Mitzi Mitosis), played gorgeously by former boy band Blue band member Duncan James, gets a call from his wife Marion (Naomi Slights), he decides to take up the opportunity to perform at her casino in Alice Springs with a special ‘best mistake [he’s] ever made’ secret awaiting him. Teaming up with fellow performers: ‘princess of the scene ‘Adam aka ‘Felicia Jolly Goodfellow’ (played brilliantly by Adam Bailey) and transsexual Bernadette - formerly Ralph, as Adam reminds us through continuous not-intended-to-be heartless jibes - (played beautifully by Simon Green, who towers over not just on-stage), they prove that, to quote ‘Go West’: “Together, [They] will go [their] way” and “fly so high”.

With 31 classic dance tunes helping the story along, we get the show on the road, riding on the tour bus after which the show is named, after rallying Bernadette from her husband’s funeral -which is a spectacular sight in itself - discovering why he was really named ‘Trumpet’ - and Adam who dreams of traveling to the centre of Australia and conquering Ayres Rock in full drag.

With favourites from/made famous by Kylie, Petula Clarke, Pat Benatar, Donna Summer, CeeCee Peniston, Gloria Gaynor, Bananarama, Alicia Bridges, Burt Bacharach/Hal David, Randy Crawford, The Pet Shop Boys, Tina Turner and even Elvis Presley, the production team certainly know how to give an audience a good time and the atmosphere of Stoke’s Regent Theatre was nothing short of electric, from the moment the first note was played by Matthew Loughran’s live band. All voices were pitch perfect and each note perfectly timed to the mood, the three divas - Lisa-Marie Holmes, Laura Mansell and Catherine Mort - must be commended, not just for their incredible voices but for their bravery whilst 'flying' above the stage (their release as they are lowered to the stage could be seen from the audience at times, as could some of the other effects but I hope the other audience members won’t have noticed).

I won’t give the secret away but 12-year old Toby Gretton’s appearances at both ends of the show create the poignancy that is present throughout after the show-stopping beginning that literally is a-laugh-a-minute, with Mr James treating the audience in the first scene which begins in a scene that could easily be matched to one of Rock of Ages.

In short (I know), if you miss this show here, you just have to make sure you see it at least once in your life, if at all possible reflecting about what ‘those kind of people’ have to endure...even today.

When attending, do bear in mind the mild bad language (only where necessary and appropriate) and maybe a bit of audience participation, contributing to a well-deserved great night out where you can let your hair down.

Priscilla continues at the Regent Theatre, Stoke until Saturday the 26th September.  Full details and tickets can be found HERE! 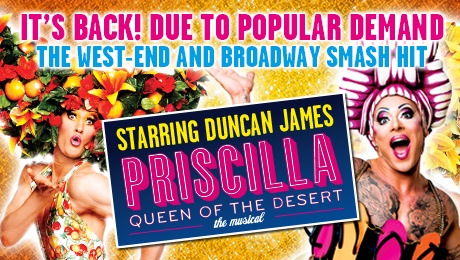