Orpheus in the Underworld - The Lowry

What a romp! With giggles galore and bucketful’s of belly laughs, Opera della Luna’s interpretation of Offenbach’s classic is an absolute delight.

From the moment the late arrival of an audience member with a loud voice, the temerity to talk to her fellow theatre-goers and to interrupt and shout to the MD during the overture, it was just one rollicking moment after another.

And how to single anyone out in this superb and multi-talented cast? Practically an impossibility when everyone was so convincing in his or her character - from the bewitching, naughty, pink-haired Victoria Joyce (Eurydice) and the ruddy-cheeked Ian Belsey (Jupiter) with his grey curly mop, to the twinkly-eyed and engaging Pluto (Greg Castiglioni) arguing with the unseen stage manager about a lack of trap door and the team of furry, pot-bellied rams munching grass between dancing maniacally and “baaing” at appropriate - and inappropriate - moments.

Playing in the round, (well, three sides with the superb orchestra on the fourth) congratulations go to the Director and Choreographer for ensuring that no-one missed out on any of the action. And action there was a-plenty. In a production littered with creativity and highlights it was surely the circular, eight-wheeled cycle built before our eyes that took the prize.

Sitting within inches of the stage in the beautiful and intimate Quays Theatre it was pretty obvious that there might be audience participation. One became caretaker of an “I’m leaving you” note; another persuaded to keep an eye on a handbag; while a potty from underneath one of the beds was thrown over unwary spectators (confetti - phew!) Combine this with gems such as Mercury stomping through on his Zimmer Frame and I think the picture becomes clear.

Even seasoned musical theatre-goers shun Orpheus - It’s an opera/it’ll be gloomy/don’t fancy it etc. - but if you’ve never seen it this is an absolutely fabulous introduction. Great singing, clever lines “I’m disappointed that hell is not that hot;” double entendres “Can’t stand another minute of your pathetic little instrument” and a Can Can to surprise.

And if you’ve seen it before, however many times, then make sure you don’t miss this version.

“Laughter is the best medicine” so the saying goes. Massive of does available at The Quays until Saturday. 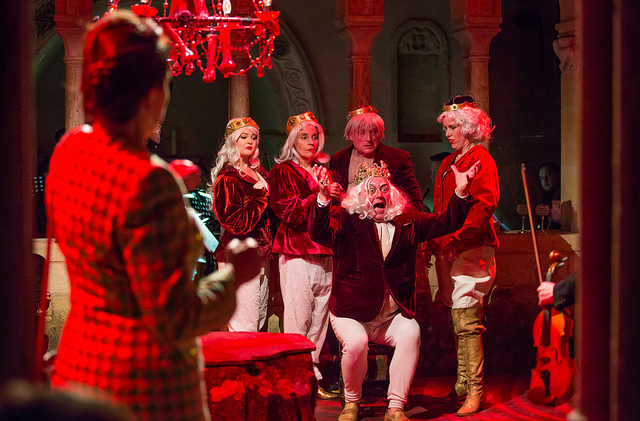