Dark Arteries comprises three separate performances by Rambert: Dark Arteries, The 3 Dancers and Terra Incognita. Each performance lasts for thirty to thirty five minutes with a twenty minute interval in between each one.

The only thing I knew in advance was that the Dark Arteries section was inspired by the thirty year anniversary of the miners' strike (who would believe it was thirty years?!) and that the famous Fairey Band were accompanying that part of the show.

Dark Arteries was the first of the three performances. The Fairey Band were on stage with the dancers, unlike the Rambert Orchestra (who accompanied the other two performances) who were in the orchestra pit.   The chilling music which started this part of the evening was quite sinister and menacing and built the tension very successfully, leading up to the dancers taking the stage.   Eleven female dancers opened the performance with a mix of ballet and contemporary dance.

The Rambert dancers are clearly highly trained and experienced performers and there is no question as to the level of their talent and ability.   However, the choreography and the meaning which was being conveyed by it (if any) was completely lost on me.   It did not tell a story and at times it was quite ungainly and not very pleasing to the eye.   I also felt that parts of it were quite nonsensical.

The Fairey Band were excellent, even though the music was strange and discordant.   The brass band sound, however, was the only connection I could make to the miners' strike.

I believe that dance should tell a story but unfortunately, this section left me completely cold and unmoved.

The 3 Dancers was the second part of the show.   This was visually much more appealing, even though it was very simply done.   Three dancers dressed in white and three dressed in black, performing different tableaux and each trio being separately spotlit to great effect.   This was very talented dancing with interesting and clever choreography:   for a large part of this section, each trio remained linked by their hands whilst intertwining.

This section seemed to be split into three scenes and for one scene, two male dancers performed together with one of them seeming to be the puppeteer of the other. This was the highlight of the evening for me, it was so well done and fascinating to watch.   I don't know what it meant but I didn't need to know as it was just a pleasure to watch. They made it look effortless, seemingly defying gravity at times.

The stage was completely devoid of any scenery at first and then to denote the three separate scenes, a shard of mirrored scenery would descend.   Simple yet very effective.   The 3 Dancers was definitely the most accessible part of the entire show.

Terra Incognita was the third and final performance. The stage was hazy and dark and the music was harsh and unfeeling.   Two of the male dancers danced together for quite a long time and as with The 3 Dancers, it was fascinating to watch them as they made extremely strenuous and almost gymnastic choreography look so effortless and light.

This part of the show was quite stripped back and bare without even any use of different lighting to give it any texture - maybe this is the intention but to me, the effect was that it all became very much of a muchness with nothing to delineate the different parts.

There was an underlying sinister feeling to the performance, due mainly to the music (which was reminiscent of the scary music used in 'Psycho'!)

At one point, one male dancer was dancing alone (the other dancers having retreated behind a plastic screen - I have no idea what this was about) and some of his choreography was quite breathtaking.   Sadly, it wasn't enough to redeem this section for me, however.   I found that the whole thing became quite tedious and I found my eyes drifting to the lady who was doing the sign language interpreting as she was fascinating to watch.

Unfortunately, this section did not say anything to me, much as I tried to find some meaning in it.

I would congratulate all the dancers on their excellent performance, as well as The Fairey Band and The Rambert Orchestra but in my opinion, they were let down by the material, which I believe needs a lot more content and story and a little less pretension. 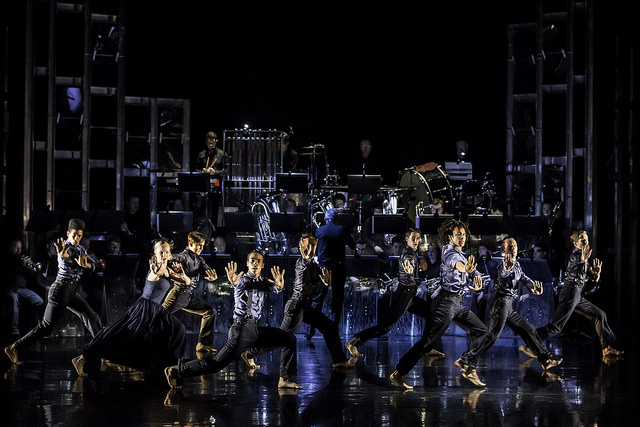