Once again Manchester Arena welcomes back Mickey, Minnie, Donald and Goofy as the colour, glitz and glamour of Disney on Ice returns to town. In this huge arena spectacular no expense is spared as the expectant crowd witness four of the biggest Disney movies played out on the ice.

The show opens with our hosts finding a box of toys left in the corner of the Arena which herald the entrance of all the favourite Toy Story characters led by a 15 strong platoon of green soldiers under the command of Sarge. Following a tightly choreographed routine covering every inch of the ice one by one new toys enter the Arena. Slinky, Ham, Rex, Bullseye, Jessie, Buzz and of course Woody re-enact Toy Story 3 condensed into 20 minutes as they toys are sent to Sunnyside Day Centre due to their owner Andy going off to college.

With appearances from Ken, Barbie and the evil Lotso who runs Sunnyside the toys unhappy there try to get back to their old home at Andy's. With some sublime skating, daring spins and jumps and a beautiful pairs routine from Ken and Barbie the whole arena is transfixed on the ice.

Following Toy Story is The Little Mermaid featuring Ariel, Prince Eric, Sebastian and Ursula. Through clever lighting the ice is transformed into an ocean floor as Ariel begged Ursula for some legs. Her wish was granted on the condition she got true loves kiss from Prince Eric. All this taking place as Sebastian sang the most famous song from the film, ‘Under the Sea’.

After the interval it is the turn of Cars to take centre stage. Sally, Mater and Lightening McQueen are joined on the ice by Hydraulic Ramone and Flo who all perform a motorised ballet weaving in between each other in a spectacular demonstration of driving control. You find yourself forgetting they are actually on ice.

One of Disney’s most popular creations in recent years was reserved until the end of the night. The audience went wild when characters from Frozen took to the ice. With more children dressed as Elsa than any other this section was sure to be a hit. Along with Anna and Hans the story of the movie is once again told in a condensed version complete with a waterfall that freezes before your eyes, real snow falling from the arena roof and a huge frozen curtain unfurling from what seemed like nowhere. The famous song ‘Let it Go’ echoed out around the arena as thousands of children sang along word perfectly.

Disney on Ice is unrivalled in providing sheer spectacle and bringing enjoyment to children both young and old. I for one cannot wait for the next visit to Manchester of Mickey and friends! 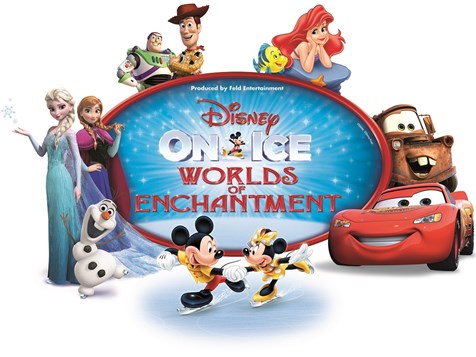