Translated and adapted by Ted Hughes.

What an absolutely fascinating prospect; a chance to watch what is, possibly, the oldest surviving Western play - A Greek tragedy first performed in 458 BC - produced by HOME, Manchester's newest theatre; a place dedicated to producing modern, innovative and challenging productions. Thus the question becomes; how can you marry HOME's ethos and values with those of Ancient Greece, whilst still making the play relevant, comprehensible and enjoyable? The answer is, even for the best of the best, with great difficulty. And so HOME had to find such a director for this project, and found a lady who is a self-confessed classicist and lover of this particular play, Blanche McIntyre, who should have been the ideal choice.

It is clear that she undoubtedly knows the play backwards, but sadly, along with a rather strange design choice, it left both me and my companion not fully understanding what we had just seen. [And I should mention that my companion last night was an actress who had already starred in a previous production of this play].

Allow me to elucidate just a little...

First of all The Oresteia in all its true glory is actually a trilogy, and as such is a very long and wordy piece (or pieces) of theatre. I have only seen this play once before, and it was a three hour performance not including intervals. HOME's version lasted for 1 hour and 45 minutes non-stop, and so it really is paramount that the telling of the story is made absolutely clear. They were using portions of a Ted Hughes translation. I am a great admirer of Ted Hughes's poetry, and know that there is great economy in his writing and chooses his words very carefully and deliberately; so the narrative should have been crystal clear, but sadly, Mr. Hughes's lines notwithstanding, it was a rather confusing production.

My primary misgiving was with the casting. As with all Greek dramas, they call for a large cast; kings, gods, armies, citizens, wives, lovers, and of course a chorus. For Home's version, they chose to use only 6 actors / actresses to play all the main roles; and this is where the confusion started and ended. Unless you know the storyline prior to watching this play, then you are more than just a little likely to be unsure at some point which character a certain actor is playing. It is not unusual these days to find actors doubling, but rarely playing three, or in one case here, four, different roles, with two actors playing roles written for the opposite gender. I have to admit that I am not a fan of doubling at the best of times, and, except for the obvious financial rationale, I simply don't understand why anyone would want to do it anyway.

The tone was set right from the beginning of this production when one actress, sitting high above the stage on a swing starts speaking as one character in a Welsh accent, but descends the swing as another character speaking in a Northern Irish accent.

The five main actors made the most of their parts, although the characterisations were somewhat different from what I remember of the more conventional interpretations last time. Not that they shouldn't be, in fact I did find that interesting and somehow refreshing. There was also some humour in this production too. This was a nice and welcome touch; there has to be some relief in a tragedy, just as every good farce has a moment here and there of seriousness. Even when, as was the case here, the tragedy is very clinical. Many murders, but not on stage, and never any blood, except for stained clothing. A deliberate choice; but then the female chorus, dressed in cleaners' aprons, enter with plastic seaside buckets containing red liquid and pour this over an already made sand castle. (??!!)

Ah yes, let's talk about the chorus. The chorus in this production were actually excellent. They worked as one, moved as one, and yet were also quite individual too. Without the chorus, this version would have fallen flat on its face. They were on stage for most of the time, had a lot to say and one section of the female chorus needed great movement / dance skills too. However, these were not actors, but members of the community. These are men and women who have given up their time, energy, enthusiasm and skill completely gratis. A massive taking off of my hat to you all; but utter and complete shame on HOME for even thinking that doing this is acceptable. If you can't afford to pay your actors, find a play that has a smaller cast!

The set design was stark, bleak, angular and minimalistic. Like so many modern designs it is full of metaphor and symbolism. The use of mood music and innovative lighting helping to create these effects. I have to admit to liking the dark grey gravel floor covering and how it was used. However, once again, like so many of the productions in this style, the set was at odds with the costumes, which were at odds with the actual words being spoken by the cast. The play speaks of oracles, Gods, furies, altars, sacrifices, whilst the costumes were mostly contemporary, and the set futuristic (?). Why did some of the women wear Greek toga-style dresses, and some wear duffle jackets or track suits? And why did Agamemnon have to wear something paramilitary just because he is the ruler?

It's a good story, a story that transcends era. As the programme notes indicate, the story is as relevant now as it was then, with crises and war knocking on our front door now in the form of Syrian refugees. It's a story that resonates, asks questions about power and morality, so why was it so difficult to get these messages across?

My overall feeling is that director Blanche McIntyre was so wrapped up in her love of this text, that allegory, imagery, symbolism, and let's face it, budget, finally got in the way. 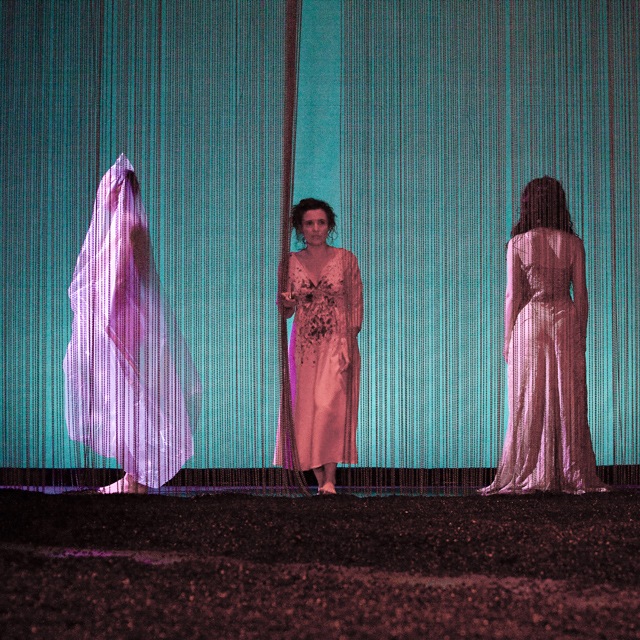