Jersey Boys returns to Manchester due to popular demand just over a year since the city hosted the premiere of this current UK and Ireland tour. Moving down the road from the Palace to the Opera House the auditoriums are still packed, a clear sign this show is a firm favourite with the Manchester theatre going public.

Jersey Boys tells the story of Frankie Valli and The Four Seasons in a show that progresses at a great pace and is peppered throughout with all the classics we know and love. The show doesn’t just focus on the success of the group but also takes a look behind the bright lights and adoring fans and into the private lives of this musical foursome. There is a balanced mix of spoken word and musical performances and the songs all relate to the current event on stage, unlike some such shows.

Since the boys last visit there have been a few cast changes, the most notable Matt Corner securing the role of Frankie on a full time basis. Matt has played the role previously at certain performances since the tour began. He joins Sam Ferriday (Bob Gaudio), Lewis Griffiths (Nick Massi) and Stephen Web (Tommy DeVito) who have been with the show since day one on the tour. All four gel perfectly together on stage producing that unmistakable Four Seasons sound with tight vocal performances.

Another addition to the tour is Joel Elferink who plays Bob Crewe, a record producer who signs the Seasons as a young group after he spots their talent and nurtures them into the worldwide success they were.

The entire cast are faultless throughout and deserve the standing ovation at the end, something on the three occasions I have seen this show never fails to happen.

A ten piece band under the direction of Gareth Weedon is hidden away behind the scenes for most of the show with only fleeting glimpses of them as they take to the stage for various songs. Drummer Stuart Roberts however spends most of his time on stage as his drum kid gets transported around the stage on a mobile platform.

The set is simple yet effective mirroring the West End version with a video screen at the back of the stage assisting in setting the various scenes throughout the show. Wire mesh grills fly in and out during the show which to me seemed a little distracting and unnecessary however this is a minor niggle that does in no way detract from the performance on stage.

Winner of Broadway’s Tony, London’s Olivier and Australia’s Helpmann Awards for Best New Musical, Jersey Boys is the winner of 57 major awards worldwide. As well as still running on Broadway and in the West End, and on tour in the UK and Ireland, Jersey Boys can be seen in Las Vegas and across the United States on its US National Tour. With the UK tour coming to an end in 2016 this may be your last chance to catch the show outside London for some time. 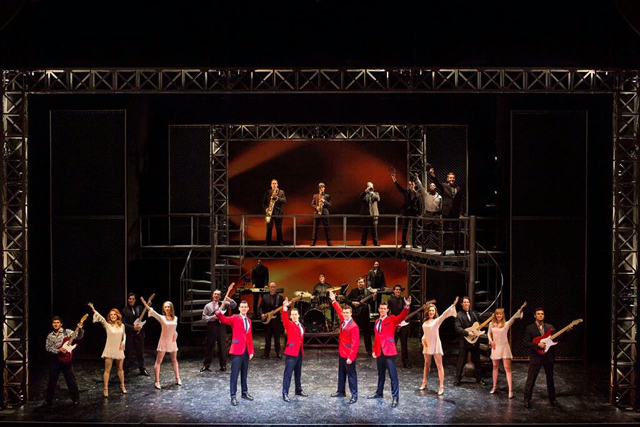