The Glenn Miller Story playing this week is a good show, but that’s about all it is, good.

The problem for me with this production is the casting. Glenn Miller was born in 1904 and went missing in action in 1944 during the Second World War which made him 40 years old at the time of his passing. The Glenn Miller Story is brought to the stage in a brand new musical, charting the life, fame and vanishing of America's most famous big band leader. So why cast a 78 year old as Miller?

On the official website for the show produced by Bill Kenwright the description of the show is but 6 lines long followed by another 10 describing the shows leading man Tommy Steele. As good and as entertaining as this show is, it appears to me to be ‘The Tommy Steele Show.’ Featuring the music of Glenn Miller.

The show begins with Steele in a narrative role, something that if continued throughout would have worked quite well. Instead we are taken through Miller’s life with Steele playing the legendary showman at all stages of his all too short time in the spotlight.

Supported by a talented ensemble who could have been used more, they interpret the choreography from Bill Deamer with precision and skill. The famous Glenn Miller Orchestra, a group of 16 in this production are faultless throughout, however consigned to the back of the stage all performance and repetitively hidden behind scenery they seem more of a necessity than an integral part of the story.

Sarah Soetaert as Helen Burger, Miller’s wife is deliciously perfect in the role. Her vocals are stunning as is her acting. Again however, we come to the casting, matching her up with Steele just doesn’t work and the scenes they have together as their relationship builds are awkward. There is an age difference here just too great to make it believable.

Despite all of my thoughts on this production Steele puts in a good shift. In watching the show you are in the presence of a theatrical legend, of that there is no mistake. His boundless energy is clear to see, his voice as good as ever and his interaction with the audience polite and warm. And yes he could have played Glenn Miller 30 years ago without any problem, today it just seems a little too far-fetched.

The Glenn Miller Story is a good piece of musical theatre and captures the atmosphere in which it was set well. The cast are fantastic and talented, the music infectious. It is just let down by the casting choice for me. 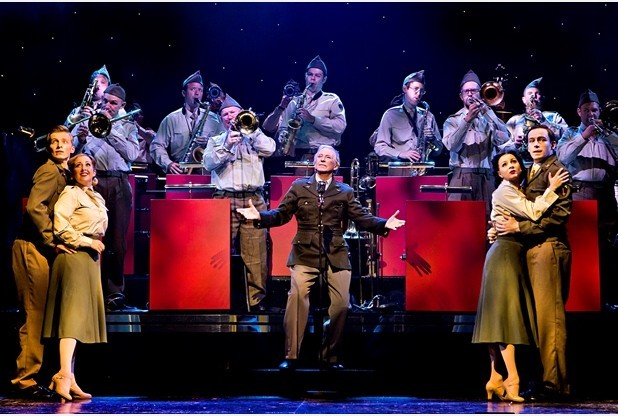