Les Ballets Trockadero de Monte Carlo was founded in 1974 by a group of ballet enthusiasts "with the purpose of presenting a playful entertaining view of traditional, classical ballet in parody form".   This is an all male ballet company - nothing unusual in that you may say, except that they dance in tutus and en pointe - both of which are usually reserved for female dancers.

The show has four sections and two intervals.

The first part of the show is Swan Lake. I was laughing within ten seconds and I didn't stop laughing or having a beaming smile on my face until the first interval. This is ballet with attitude! Whilst being totally faithful to the classical tale, the Trocks (as they refer to themselves) bring something fresh and exhilarating which is just so enjoyable to watch. The written word doesn't do it justice, it really has to be experienced.

There is so much dancing talent on stage, it is difficult to know who to watch. Each dancer brings character and personality to the performance.   The ballet is performed with humour, excellent comic timing and wonderful facial expressions but this doesn’t come across in any way as being disrespectful to the serious art of classical ballet, in fact, I would say it honours it.   The humour also doesn't detract from the unrelenting skill and expertise of these dancers. I have to mention Philip Martin-Nielson who played the Queen of the Swans - he has possibly the most elegant ballerina arms I have ever seen, I could hardly take my eyes off them!

I think one of my favourite parts was "The Dance of the Cygnets".   This is done with one slightly delinquent cygnet giddily doing 'her' own thing which had the audience howling with laughter.

At the end of the first part of the show, the dancers take their curtain call and are then revealed when the house lights go up to be fighting over the bouquet which has been presented by one of The Lowry staff.   Absolutely genius.

The second and third parts of the show are "Patterns in Space" followed by "Go for Barocco".   Patterns in space is a very astutely observed, tongue in cheek version of "a post modern dance movement essay".   Having seen a show featuring contemporary dance recently (and not particularly having enjoyed it), I found this hilarious and not too far from reality!   The stars of this section were the two musicians - Robert Carter and Raffaele Morra.   Just too funny!

To round off this section of the show, we had "The Dying Swan" from Swan Lake.   This was amazing. Not only the dancing but the interaction of the Swan with the audience at the end of this section - cheekily remaining on stage for the curtain call for as long as possible and encouraging the audience to continue clapping (which they did - willingly!). Pure Prima Donna! Anyone who has been to a ballet will be familiar with the endless curtain calls of which this was a parody.

Bringing the show to a close was Don Quixote.   The dancing in this was quite literally jaw dropping, eye popping and - well - just amazing.   Chase Johnsey and Carlos Renedo had the two lead roles in this part. How Chase, in particular, has any feet left after performing, is a miracle.   He spends most of his time en pointe, on several occasions standing en pointe on one leg for several seconds.

The dancers are classically trained and they are muscular and elegant.   They quite clearly love what they do and my goodness, they do it SO WELL.

At the end of the show, the dancers all took the curtain call - then all of a sudden, the stage was filled with dry ice and the music to Lord of the Dance began - and they all began river dancing.   This took us all by surprise but what a hilarious way to finish and what a brilliant way for them to further demonstrate that they work hard but they don't take themselves too seriously.   Wonderful.

The Artistic Director, Tory Dobrin, took to the stage after the dancers had exited, for a twenty minute Q&A session with the audience.   This was a very nice touch, it's a shame that more people didn't stay as he was very interesting and it was fascinating to learn more about the company.   We were informed that all the dancers are "nice guys" and that there is no diva attitude "as we want all that on stage, not off".   It is clear that this company are genuinely nice and love what they do. The Q&A session gave us an insight into their hardworking world.

The overall feeling I came away with was one of warmth and total enjoyment. This is a lovely company who have got the balance just right.   I sincerely hope that it won't be too long before they Trock back over to The Lowry.

The show is on at The Lowry on Saturday 7 November. If you can get tickets, for goodness sake go. You won't regret it - and you will get to see a bit of speedwalking and a ballet dancer moonwalking en pointe. What's not to like? 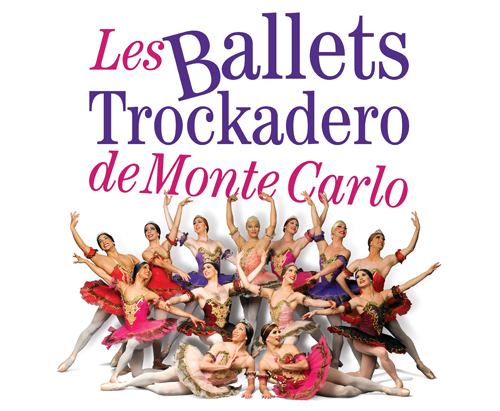