There can be few thespians who are not aware of this play and its provenance: Shelagh Delaney's first play, written when she was only 18, first produced by Joan Littlewood's Theatre Workshop in 1958 and one of the finest examples of a genre very fashionable and ground-breaking at that time which became known as 'kitchen-sink drama'.

To expound just for a second; the term 'kitchen-sink' was first coined in 1954 and referred to a painting, but the term soon caught on to include plays and films etc that gave socio-political comment on the British working class, showing them in cramped and poorly furnished spaces; showing them as real people, and showing them as angry and dissatisfied. It was a reaction both to the political situation at the time and a railing against the established and stereotypical way of portraying the lower classes in plays, such as those written by Noel Coward or Terrence Rattigan for example.

This though is a kitchen-sink drama of epic and classical proportion in the issues it tackles. Single mothers, alcoholism, prostitution, teenage pregnancy, but most importantly the decade's attitudes towards class, race, sexuality and homosexuality.

It was with this knowledge that I went to see the version presented by The Inhouse Professional Salford Theatre Company at Salford Arts Theatre last night.

The stage was uncurtained and the set open to view as we took our seats. We were shown a composite set of a squalid flat, the bedroom being on the left and the living room to the right. There was no wall between the two rooms, but instead a vanity screen - the type used for dressing and undressing behind to preserve one's modesty - was used. There was a small bare window frame suspended from the flies for the bedroom which clashed against the more conventional and solid larger window used for the living room. This window was on one flat and then, after a large gap there was another flat which had a fireplace but no fire. The sofa, which in most houses would normally face the fireplace, or at least something of interest was facing directly out to the audience and it was not clear what was on that forth and unseen wall. Thus the sofa had no connection to the rest of the flat. The set somehow looked unfinished, especially with using only the two flats and so far apart, but with just a little more attention to detail it could have worked so much better than it did. And it certainly lacked a carpet or some rugs.

There is one scene in the first act which is set outdoors. This was done in front of the set, and would have worked nicely but for two glaring errors. First we could still see the set, and second both actors sat on the sofa's arms whilst still outside! That being said however, the costumes really were very good and looked authentic. My only slight concern being that Peter wore the exact same suit and tie for both his entrances, which in the play are almost 9 months apart.

In the main it was well acted and the characters clearly defined, but the whole play seemed to lack a certain "oomph". There was little or no chemistry between certain characters at times and it was almost as if the cast had been told to hold back on their emotional responses making a lot of the moments of heightened tension or fighting very contrived and unnatural. The fight in Act two over the sofa was so stilted it was like watching a video whilst pressing the pause button on and off! I would dearly have loved to have seen these characters push their emotional ranges further, and bring out a more truthful and angst-ridden performance.

The play tells the story of alcoholic single parent Helen, played by Roni Ellis, and her seventeen year old daughter, Jo (Jess Cunnings). Helen moves from hell-hole to hell-hole dragging her daughter with her. She is a woman of loose morals and gets whatever money she can by sleeping with any man who comes her way. There is certainly a rather confrontational and ambiguously inter-dependant relationship between these two which was very well played and paced by the two actresses last night. Jess Cunnings portraying a petulant, obstinate, single-minded teenager to a tee. She was the most real and centred of all the cast. The play progresses as we see one of Helen's ex-lovers track her down and enter the flat. Obviously disliked by Jo, but Helen accepts his courtship and affection nevertheless. He is Peter, played in this production by Alex Miller, certainly looking the part; tall and lanky with a menacing eye-patch, but yet again, there seemed to be an unseen force holding him back, and even in the second act when he shows his true colours, never really was able to free himself from the shackles of the directing. Was it over-directed? Under-rehearsed? Or did changing the director midstream cause this? [Ian Moore being credited on the flyers and publicity; but Chantell Walker is credited on the programme.] I don't know.

Jo then falls in love with a black sailor, and has a fling with him becoming pregnant. However he sails away and is never heard of or seen again. After Peter's marriage proposal to Helen, and her acceptance, she too sails off into the sunset leaving poor Jo to cope with pregnancy on her own in the flat.

In the second act we have moved on a little in time, and Helen is still living supposedly in the lap of luxury with Peter, Jo has a new friend who becomes her lodger, who by default also becomes a surrogate would-be father to the unborn child. This is a young art student who needed a safe place to stay because he too, is something of a social outcast, and the two develop a rather unlikely friendship. Their love-hate relationship was well-judged and they did spark off each other nicely. Even the awkwardness of the kiss and offer of marriage was well considered. The role of Geoffrey in this production went to Michael Loftus, who played this homosexual falling in love with a young pregnant lady - a rather comical situation taken on face value - with ease and aplomb. I would have, however, found the character a little more believable if he had displayed a little more feyness from the start. Unless you knew the play beforehand, I doubt you would have known he was gay on his first entrance, and to know this was necessary to the plot. I know this encroaches somewhat on stereotyping the character, but given the decade in which the play was written and the issues that the play tackles, it would have been a small but significant step in the right direction.

The play of course ends on a down beat with a huge question mark over the future of Jo and her child as she sits alone, both Helen and Geoffrey having left. Her plaintive and heart-felt rendering of the nursery rhyme completely ruined by the harsh and too loud Jazz music suddenly starting. In fact, most of the scene and mood changes were ruined by inappropriate and loud music accompanying them. Such a shame.

What is very refreshing however is to see some classic British theatre being regenerated and produced on the Fringe circuit. This play was last seen professionally in Manchester in 2008 at The Royal Exchange, and so it was certainly great to see it come back to its homeland and although this production is certainly not without its flaws, it remains true to the playwright and is still a very watchable and enjoyable piece of theatre.

A Taste of Honey is playing at Salford Arts Theatre until Saturday. http://www.salfordartstheatre.com/whats-on 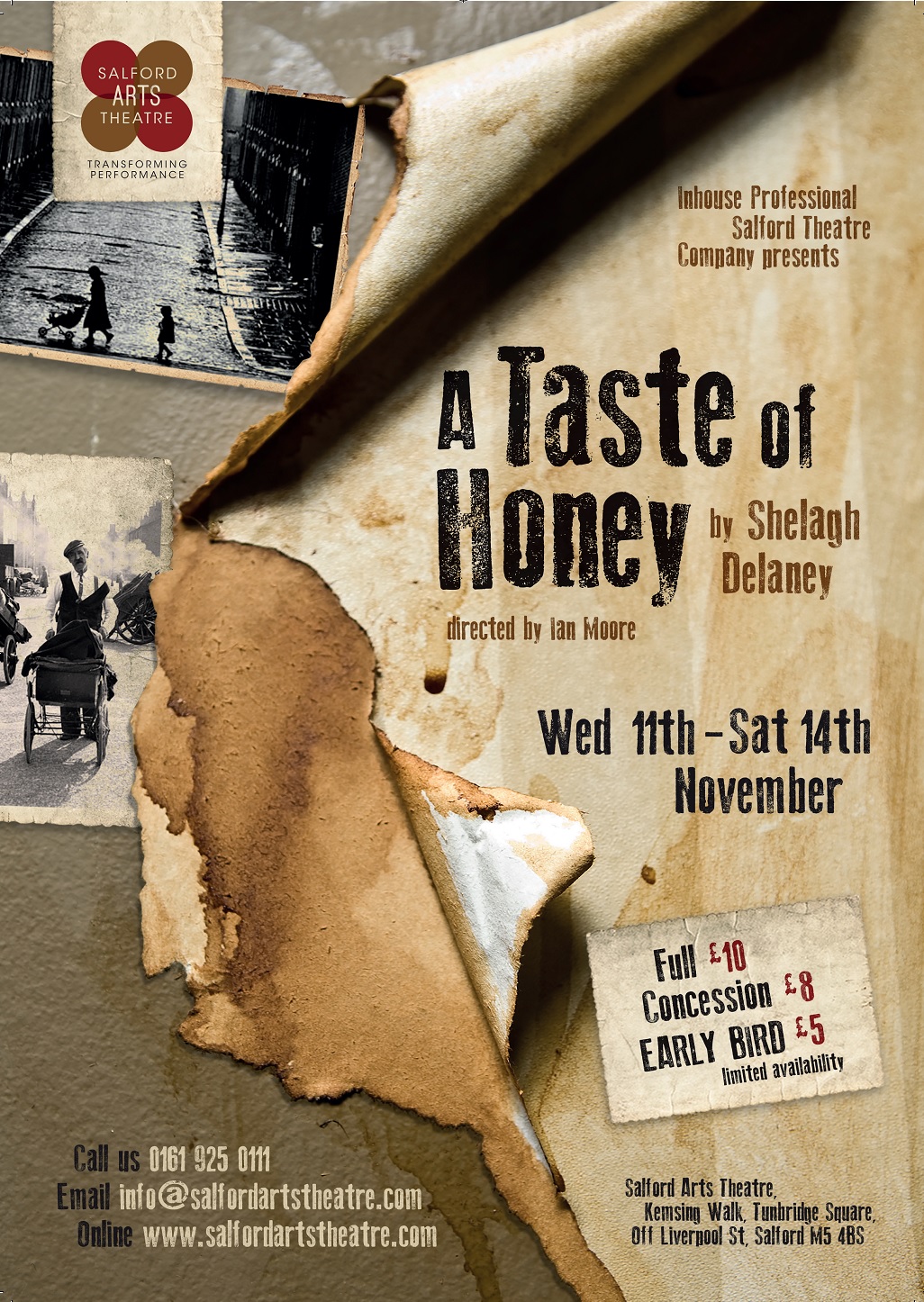