Kiss Me Kate - The Lowry

'Kiss Me, Kate' is the show which reportedly put Cole Porter back on the map.  Having hit a slump around 1943, he needed something fresh to get him back in the mind and heart of the theatre going public

He was approached by writer, Bella Spewack, with the idea of staging 'The Taming of The Shrew' as a musical but it couldn't be done straight and yet it couldn't be changed.  There is some controversy as to whether it actually was her idea because Saint Subber, the show's co-producer, maintained that he came up with the idea after working with husband and wife team, Alfred Lunt and Lynn Fontanne.  Apparently the couple couldn't stop bickering backstage and it was thought that this would be a great premise for 'The Shrew'. 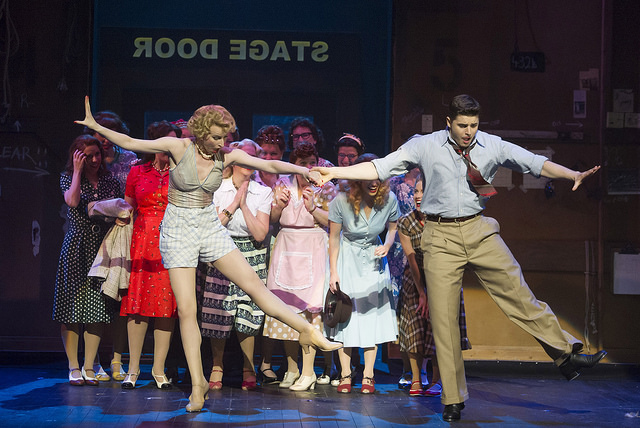 This is quite a complicated show with various threads running through it and it takes a while to comprehend everything that is going on.   We are seeing a show within a show:   the company are performing the musical version of 'The Shrew' but this is interspersed with the on-off, love/hate relationship between Fred Graham and Lilli Vanessi, the two lead characters in 'The Shrew'.  They were previously married, now divorced but appear to be falling in love with each other.  Briefly.  We see all the antics backstage and how their feelings towards each other spill over into 'The Shrew'.   Had I been a fictitious member of the fictitious audience, I would have requested a fictitious refund!

As well as the romantic storyline, there is a sub-plot involving two gangster type - although very polite - heavies who are pursuing Fred Graham for a debt of ten thousand 'Gs' which has been incurred by Bill Calhoun masquerading as Fred.  Bill plays Lucentio in 'the Shrew' and is also the boyfriend of Lois Lane, the somewhat intellectually challenged actress who plays Bianca in 'The Shrew'. Confused yet?

The show opens with "Another Op'nin, Another Show".  Unfortunately, Hattie's (Katie Kerr) microphone didn't seem to be working well so it was quite difficult to hear her.   Some of the sound wasn't quite loud enough in a lot of the songs.

It becomes clear very early on as we see 'The Shrew' unfold that the production (of the show within the show) is not very good and some of the acting leaves a lot to be desired...Bianca demonstrating this excellently with her very un-Shakespeare like girlish giggles and squeaks and chocolate box posing.   Tiffany Graves plays this part to great effect and provides a lot of the humour.

To add to the production's woes, although Fred and Lilli have potentially rediscovered their feelings for each other backstage, this soon unravels on stage when a bouquet of flowers from Fred to Lois is intercepted by Lilli who believes them to be for her - as they are the same flowers that were in her wedding bouquet.   She secretes the accompanying note in her bosom to read later - expecting to read a billet doux from Fred...which it is - but it is directed towards Lois.   Being a true professional (not!), Lilli manifests as a woman scorned during 'The Shrew' and the script is re-written on the hoof by her as she rages at Fred who does his best to ensure that the show goes on (as it surely must, everyone knows that).

The two gangster debt collectors (The Two Gunmen) played by Joseph Shovelton and John Savournin are comedy brilliance.   You just can't help but laugh at them.   They end up taking part in 'The Shrew' - wearing doublet and hose...with socks, suspenders and spats.

"Too Darn Hot" is perhaps one of the more well-known and popular songs from the show and I was a little disappointed in its performance - simply because I felt there were too many people on the stage and the wonderful dancing by the ensemble couldn't stand out as much as it deserved to.

The highlight for me was The Two Gunmen singing 'Brush up Your Shakespeare'. They played this to maximum comic effect with physical comedy as well as the excellent delivery of the song.

If you haven't seen this show before or aren't familiar with the story, it can take a little while to get into and I feel it is quite slow to get going.   However, the sets are great, the costumes (in the Shakespeare parts) are lavish and colourful and the orchestra is simply wonderful.