“Romeo, Romeo, where for art thou Romeo?”

It has been over a decade since I studied Romeo and Juliet for English lessons back in High School, but the story and some of its more famous lines have stayed with me, imbedded permanently into my memory.   To see it on stage with only dancing and music interpreting the story,  I worried it was going to be more difficult than Shakespeare’s jargon to follow, however within the opening act, set in feuding Verona, my worries dispersed as through the power of dance and costumes, it was made easy to follow.   The rival enemies all wore the same colour costumes, as in one side all wore one colour and the other side all wore a different colour.

Act one opens in the Market Square where the Montague and Capulets are rival families.  A young Montague is paying court to Rosaline but she rejects his advances.  An encounter between the rival families turns into a brawl, but the fight is interrupted by the arrival of the Prince of Verona and, albeit only temporarily, peace is restored.  My favourite scene in Act 1 has to be scene 4, The Ball.  Romeos friend Mercutio joins in the dance and is highly comical, whilst Romeo is too busy falling in love with Juliet.  However, their romance ends up being interrupted when Romeo is spotted by Tybalt, so he seeks refuge in the Capulets garden.  Juliet comes out to find Romeo and they pledge their love for each other. 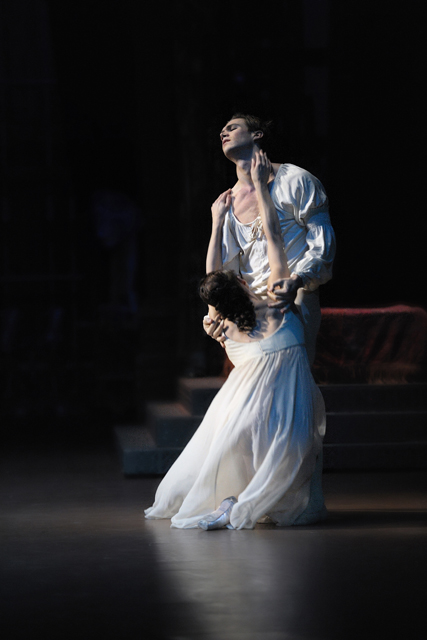 Act two opens once again at the Market Square where Juliet has sent her nurse with a letter for Romeo.  However, she is unable to find him and the square soon fills up with crowds of people, but soon after the Nurse is quick to spot Romeo and delivers the letter; the letter telling of the planned secret marriage Juliet has set up for them with Friar Lawrence.  I won’t continue with the storyline as I am sure everyone over the age of 16 at least, is familiar with how this tragic tale of forbidden love ends, however I will stress just how magical this adaptation is and how, through only music and dance, the audience is still captured in this tragic love story.

The costumes and stage set are fantastic, the music works wonderfully and flows easily from scene to scene.  Of course, with English National Ballet you expect only the highly skilled and totally faultless dancers, which is exactly what they delivered.

I will be honest and say that I did not particularly enjoy Romeo and Juliet at school, however my companion for the evening adored it - I think partly because around the same time of us both studying it in High School (a year or so apart), the movie adaptation came out staring Clare Danes and Leonardo DiCaprio, which helped a lot of fellow classmates fall in love with the story (and a certain young Romeo!), however I still wasn’t bowled over by it.   After this performance I now have the overwhelming urge to embrace my inner moody teenager and re-read the book!  I hope to see further Shakespearean productions by English National Ballet, as it has made me see Shakespeare’s work with a whole new view.

For this, I thank you ENB!

I cannot point out one exceptional cast member as every dancer, from leading roles to ensemble was truly outstanding.  The performance is a lengthy one, with two intervals the total running time is a little over three hours. This added to five hours travelling to the venue at either side made one appreciate having two intervals but made for one very (yet worthwhile) late night!

I look forward to further English National Ballet productions in the future.