Every year a major West End musical visits Manchester to spend time in the city over Christmas. Previous years have seen Shrek, West Side Story and The Lion King visit and this year it is the turn of The Bodyguard to thrill Manchester’s festive audiences.

Based on the Warner Bros. film written by the acclaimed, Oscar-nominated screenwriter Lawrence Kasdan (Raiders of the Lost Ark, The Big Chill, The Empire Strikes Back), with a book by Drama Desk Award-nominated Alexander Dinelaris, this extraordinary new production of THE BODYGUARD is directed by the award-winning Thea Sharrock (Sunshine Boys, Equus, The Misanthrope).

Former Secret Service agent, Frank Farmer (Stuart Reid) is hired to protect superstar Rachel Marron (Alexandra Burke) from an unknown stalker (Mike Denman). Each expects to be in charge – what they don't expect is to fall in love…

This is one spectacular show! From the B of the bang The Bodyguard has you on the edge of your seat and Burke lights up the stage from the opening number until the final curtain. Her vocals are at times astonishing and the entire press night audience weren’t afraid to show their appreciation with cheers and applause reverberating around the auditorium all night.

This show however isn’t all about Burke and Whitney Houston’s most famous tracks. There is a story here as well and if anywhere this is where the production lets itself down slightly. Whilst the story is sound and compelling, at times it just does not appear that the majority of those acting it believe in it enough to provide convincing performances. The acting on the whole seems very wooden and more like a script reading than a live performance. 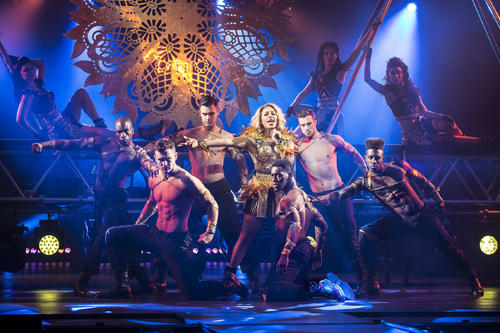 A triumph of this show is the versatile set. Expanding and contracting into a multitude of shapes as the story unfolds. Designed by Tim Hatley it really is a sight to see with flames leaping from the stage and a mist masking scene changes it is brought to life by pin-point lighting design from Mark Henderson. Clever projections interacting with the live on-stage action provides a cinematic feel to the show.

Reid as the former Secret Service man turned Bodyguard is convincing in the role, keeping in the background until required. His interaction with Burke is touching at times but it is his scenes with young Fletcher (Marron’s son) who is played by 6 different young actors on a rotational basis that really bring a warm glow to your heart.

Melissa James is a name to watch out for in the future. As Marron’s sister, Nicky she brings huge talent to the stage as she watches her sister fall for the Bodyguard and jealousy rages. As Burke’s understudy for the title role it can’t be long before James is headlining such a show herself.

One of the standout performances of the night was that of the stalker played by Mike Denham. Despite not saying a word all night he plays the menacing psychopath perfectly. With more than a hint of ‘Bond villain” about him, his appearances on stage were greeted by gasps from some audience members as you were not quite sure what he was about to do next. The simple scene using the gun with a laser sight was utterly chilling and uncomfortable to be part of, but a genius piece of theatre. These scenes highlighted once again the stunning lighting design from Henderson.

An 8 piece band led by Tom Gearing are hidden somewhere backstage and you don’t see sight of them until the curtain falls at the end of the show and they are projected onto the curtain. This is a real shame in my view as they deserve more appreciation than they got. I am sure there was a logical reason why the orchestra pit wasn’t utilised for this particular show.

The Bodyguard is a great show and an extremely enjoyable night out. Houston fans will not find fault with it as Burke is stunning throughout. With a little more conviction from the cast in the acting department this show could be sensational!

The Bodyguard plays at the Palace Theatre until the 9th January 2016 and more information can be found at http://www.atgtickets.com/shows/the-bodyguard/palace-theatre-manchester/