Into The Woods - Royal Exchange

With a score by Stephen Sondheim, and book by James Lapine, this is a dark and twisted journey which explores perhaps the true nature of fairy tales. Characters from various well-known stories are all happily living together, but things go very wrong when they are allowed to explore their own selfish wishes and to start acting for themselves. The plot follows the stories of the childless baker and his wife intertwining with Little Red Riding Hood, Cinderella (with her wicked stepmother and ugly sisters) and Jack and his mother (including Milky White the cow), Rapunzel, and in this story, Rapunzel's mother, a wicked witch. And as if this scenario wasn't complicated enough, the narrator grants each of the four protagonists a wish at the beginning of the show and in the first half we see these four wishes being carried out with sometimes hilarious and other times quite disastrous consequences.

However, as all good fairy stories do, this one ends happily ever after and we leave them all there to grow old together. In the second act, we meet the same characters again only a few year's down the line, and we now see that their selfish acts and simplistic wishes had consequences. The Musical takes a rather unusual (in Musical Theatre terms) turn to the dark side and explores human nature on a rather frightening scale. How we are all so easy to pin blame on others and how we wish simply to be seen as 'nice', and are not too concerned on 'good'. And as the characters' walls and lives literally disappear around them with the Giant's wife climbing down the second beanstalk to reap revenge for the killing of her husband and the stealing of her possessions, characters are killed off one by one! Interestingly throughout the Musical, the characters that we are taught to love and admire are the most egoistic, simplistic and cruel, and the witch is the most ambivalent and pragmatic about the circumstances and is given the truest and most honest things to say. 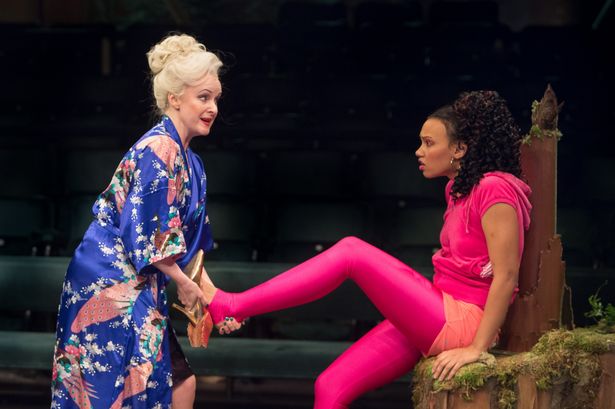 It's a very brave and bold Musical, and as such can sometimes lose the humour which is in there in large amounts, and so it needs some very careful and considerate directing. Enter Matthew Xia. He has in this production brought out each individual storyline creating a narrative which is very understandable and allows us to be drawn in to the worlds and thoughts of these characters with ease; we are totally engaged in their nefarious goings-on, and their characterisations are truly delightful. It is of great credit to Mr. Xia that he has been able to bring such a twisted and convoluted tale to life and make it so easily accessible. It gets dark and scary - but not unduly so, and people die - but this is not The Odyssey!

Natasha Cottrial as Little Red Riding Hood was superb, as was the Baker and his wife played respectively by Alex Gaumond and Amy Ellen Richardson. Jack, played by David Moorst, giving his character just the right amount of simple-ness and charm, the perfect foil for his long-suffering but good-natured mother, played by Claire Brown [ although why she appeared to have a slight Scottish accent I am not really certain ]. The Witch, played by Gillian Bevan owes a lot of her vocal intonation and character to those who have gone before her in this role, but gave nevertheless a flawless performance. Why oh why though did she have to make such an obviously contrived and awkward move to the back of the auditorium to transform? Her metamorphosis only really works when it is done - with witch-like magic - in front of our (and the characters') eyes.

The two Princes leaping in and out of the set like stags on heat not only worked very well together but injected some much needed energy and pace into the show which at times threatened to come to a complete halt altogether, played with much passion by Marc Elliott and Michael Peavoy. 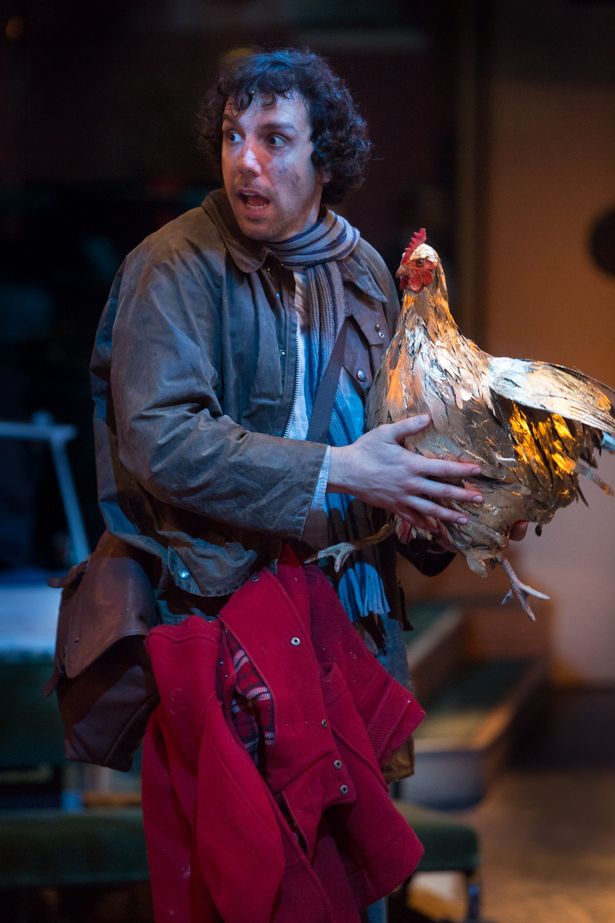 I have to admit to being uncertain at first about Cinderella. {Francesca Zoutewelle}, however as the production progressed she grew more and more on me, and found myself liking her interpretation quite a lot. Her stepsisters and stepmother {Gemma Page, Maimuna Memon and Michaela Bennison} providing much of the comedy with outrageous costumes, and delightfully slightly over-the-top acting.

One other thing which took a long while for it to grow on me was Milky White. At first I was totally against the idea of bringing on a half-life-sized puppet cow and it being moved by a handler around the stage. But once again, through the strength and conviction of both acting and directing I was managed to be convinced and I bought into it, even liked it by the end of the first act. The cow was manipulated very adeptly by Rachel Goodwin.

So, what was there not to like about this production? Actually a couple of things really did concern me.

First, my most major concern was the Wolf. I have never seen a wolf like this before, and I have seen many productions of this Musical over the years. Completely naked save a dancer's jockstrap, a bushy tail and a wolf tattoo, dancing and prancing around the stage with lascivious intent was nothing short of pornographic and when pitching this against the object of his lust, "Hello little girl!" it shifted into 'predatory paedophilia' territory and I was really rather uncomfortable with this interpretation. I felt it inappropriate on several levels.

Second, the whole show was a little long. This I fear was due to the musical direction.

As is usual with a Sondheim score, he gives the singers little or no help in finding their starting note and continues in that vein preferring them to find their own harmonies and melodies from his rather convoluted but brilliant scores, so you not only need excellent and accomplished performers - TICK; but you also need a Musical Director who can bring this score to life. - Tick???. ... Unfortunately no. Most of the songs were all taken at the same pace... there was little or no variety in dynamic throughout the whole evening; some going so slowly they came to complete stand-stills totally losing the brilliance and effect of the rhyming patter lyrics so typical of Sondheim. The only song to break out of the pedestrian pace set by MD Sean Green was 'Your Fault' in the second half! And the first act song 'Perfect' is usually cut since the first half is always a little long anyway.

The set, designed by Jenny Tiramani, was in fact extremely effective. A very simple idea of three tree stumps which grew large to reach the branches strategically placed above them so that the cast could move seamlessly from IN the woods and OUT of the woods. It worked, and it worked well. It did though, get just a little wearisome seeing these trees move up and down several million times throughout the show. It was a nice and clever idea overused. But there were some really wonderful touches in there too. The scene in Grandmother's cabin and how that was played was actually the best I have ever seen and it worked marvellously. I also really liked the leaves falling down from the trees as the giant moved around unseen.

So, in summing up this production I would say that it is indeed very good. In the main sensibly and intelligently directed bringing out some lovely characterisations and always making sure that the story is clear and understandable; however, the whole production dragged due to some rather sluggish and self-indulgent Musical Directing.