"If there was a book of your life, would you be brave enough to look at the ending?"

What a fantastic line and what a fantastic premise. This was the kind of superb theme and writing that the actors and director had at their disposal. So why did I leave the theatre tonight feeling somewhat underwhelmed.

It would be very unkind and wrong of me to say that I did not enjoy this production, but it would equally be as fair to say that it did not live up to expectations.

After having had the privilege to watch a couple of short 'in-rehearsal' scenes and chat with the cast I came away from that occasion feeling very excited. Their energy and enthusiasm palpable and the potential evident. The actual show didn't exactly fall flat, but it certainly didn't deliver.

I have several problems with this play as is; and I shall try my best to elucidate.

First; this is an adaptation of a whole novel squeezed in to 100 minutes of stage time, and consequently depths and levels of characterisation, and whole chunks of narrative have been shed. [This is an assumption having never read the novel, but judging by the leaps in the play it has to be so.] They have kept the shell, and not really filled in the gaps. The style of presentation was confusing because of this. The characterisations were at best bi-dimensional, but with the vast majority of the cast, they were mono-dimensional. Now this would not matter in the slightest if they were acting in a pantomime or similar children's entertainment - in fact it would be expected - however, what we had here was a 'proper' play and the actors were not, in the main, playing their characters for laughs. This was 'real', and therefore the mono-dimensional approach seemed at odds with the director's objectives. Further, I have to question whether or not I actually BELIEVED these characters. and actually no, I didn't. I wasn't afraid of Capricorn, and more importantly, neither were the youngsters; I didn't believe Mo's emotional changes, which were really quite minimalistic at best, and I simply did not understand why or how the narrator suddenly changed into Resa, Meggie's mother, and why she suddenly became dumb. If that was in the narrative, then I must have missed that bit!! 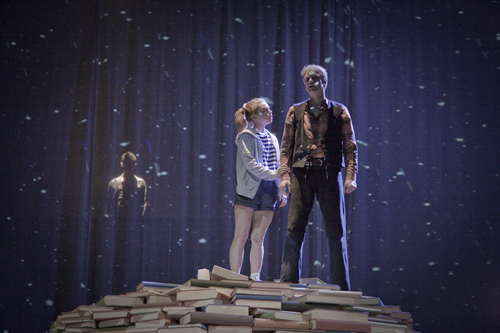 Second; I really question the suitability of this play for very young children. It is marketed as a family show and aimed primarily at the preteen age group. Personally I would advise 8 years and upwards. If you were to have made it a panto, and act the same story, I wouldn't have the need to say that!

Third; there were nowhere near enough laughs in this show. It is a very dark story, some parts very dark indeed, and this side of the production was very well directed perhaps a little overmuch. If you are directing a show for the young and very young, then you need to keep their attention and entertain them. There were a couple of young school parties in tonight as well as a lot of individual youngsters with parents, and there was quite a lot of fidgeting, and the cast only really managed to truly engage them when they did the slapstick fighting, and actually talking to them as they did at the start of the second half.

Fourth; I think this production requires a certain amount of pre-knowledge on the part of the audience. I was all the time trying to think that if I hadn't have seen a preview of this would I fully understand exactly what was going on and who each of the cast were and their relationships to each other. Sadly in answering my own question, I came up with a 'no'.

Finally; the cod Italian and Arabian accents that I heard at the preview were good natured, humorous and not at all offensive. They worked and I enjoyed them because they were funny. On stage tonight they came across as border-line racist and I really was unsure how both myself and other audience members were reacting to this.

All of this really saddens me. Saddens me because there was a huge amount of talent on stage tonight, giving their all, but regrettably through no fault of their own never really quite hitting the mark. I think this all boils down to some lack of direction in the directing, if that makes sense! Walter Maierjohann, the director, comes from a completely different theatrical background from most of us who have had our theatre education and experiences here in the UK. What he does is try to infuse actors who are trained in the British style with some very European ideas and thinking. Maybe that is a rather grandiose and sweeping statement to make, but I don't think I am too far off the mark by saying it, and I am not sure that this eclectic mix of styles blends together quite the way he intended them to. 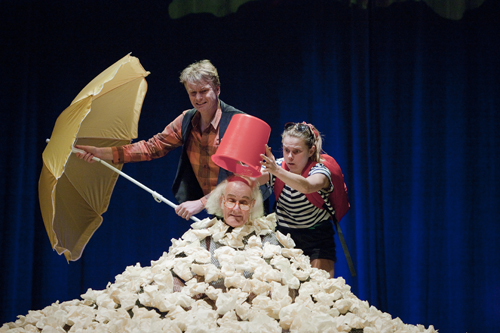 Katherine Carlton was a massive little powerhouse and was a totally convincing 12 year old. The balance between naivety, excitement and adventure pitched very nicely against her petulance, anger and adolescent truculence. Both Rachel Atkins as Aunt Elinor and Kern Falconer as Fenoglio were superb cameo comedy roles and a delight to watch. More should have been made of both of these characters. The two inept and foolish henchmen of Capricorn [Darryl Clark and Griffin Stevens as Basta and Flatnose respectively] worked well together and found some comedy in their slapstick and knock-a-bout routines, but again I feel sure much more could have and should have been made from these obviously very capable and likeable performers. Dustfinger, played by Andrew Sheridan, I think has probably the hardest role in the production. Pretending to be on Meggie's side, but all the time working for Capricorn and then switching allegiances and turning against his boss in favour of good. A manipulative and vile character at best but with a good heart somewhere inside him. He actually managed to be far more menacing and scary than Capricorn and far more likeable at the end than Basta and Flatnose who get their just desserts.

The set, designed by Stephane Laime looked great - a huge pile of books centre stage; but after the first few revolves and tilts, and after the gauze curtains had been moved round for the umpteenth time for projections to be screened on them, it became all too predictable. I did like the Tinkerbell sequence though. That really did work very well indeed.

Reading back through what I have just written I am aware that it comes across as extremely negative, perhaps a little too negative, but no matter, I'll leave it. It is a good show, yes truly it is. But it COULD be a great one if it were to find its true niche. As it stands it is neither comedy nor straight play; it's not a pantomime, it's not a tragedy. It's a fantasy adventure story with lofty intentions looking for a home. Maybe home is where the books are!?! 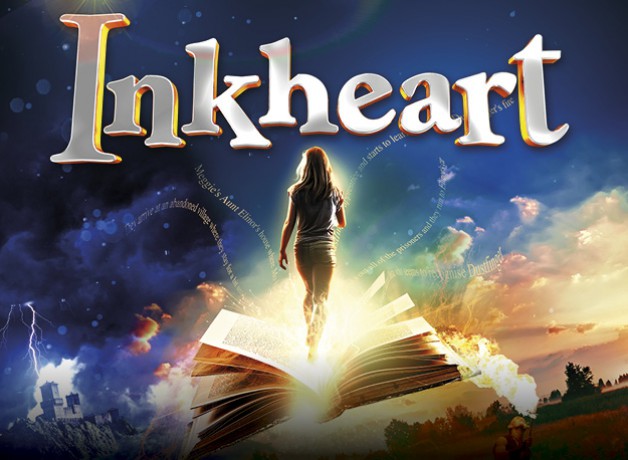