After seeing many pantomimes and children's plays this season, it has taken me right up until the last one before Christmas Day itself, before I find one which does exactly what it sets out to do - entertain children, in the most inoffensive and age-appropriate way possible!

I went to Uppermill, a small town east of Oldham and part of the area known as Saddleworth, to their Civic Hall, to watch Red Riding Hood, a Christmas play for children presented by Hard Graft Theatre Company.

This is a small scale, low budget production, but presented with real passion. The set, a black stage with two tent entrances; one at either side, and a central panel / screen, was quite minimalist but proved to be sufficient. All the music was pre-recorded. Understandable, but a pity. Live music is always ten times better. But the direction and the acting made up for these in no small measure.

It was a cast of three; Lorna Tinsley (Freda aka Red Riding Hood), Lucy Hird (Brown Owl), and Alex Phelps (Barker). All three rather young, but what they lacked in experience they made up for in energy and commitment. And, here's the big plus, it was all totally understandable, clearly and easily delivered for the youngsters. It was all age appropriate and you engaged the children and kept their attention throughout! [I’ve been wanting to write that for a long time!]

The story. Well if you were looking for something traditional, forget it. I see that nothing this company does is traditional. Even the programme was a set of photographs! In a nutshell, a rebel brownie named Freda has to stay behind whilst the rest of the pack and their leader go on an adventure. She decides to get back into their good books by delivering a parcel to a lady who lives in the woods. She is met by a wolf, or rather a man who works at a carnival, but has big ears and eats children, so he is by default, the wolf. The Brown Owl and the brownie pack go looking for her, and between them end up in various scrapes and near misses, and finally defeating Barker (the wolf) by tricking him into wearing a remote control collar and the youngest brownie controls him to do various things before sending him off on a long walk! 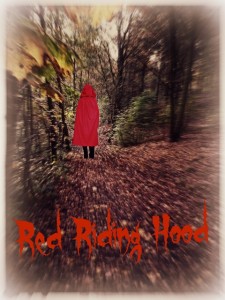 There are some really inspired ideas in this play. {It’s not a pantomime by any means - but there are elements of panto in there). And despite there being an evil child-eating man-wolf in the play, it is not at all scary. He is in fact rather funny and pleasingly evil. A delightfully different interpretation. It makes it far more believable though for Red (as she became known) to be beguiled by him and semi-believe him. Even his magic tricks were well done, and the Tupperware potion-making was lovely!

I enjoyed the use of the projection in this show too. The reservoir boat was particularly good. [I forget the name of the reservoir but it was a local landmark. The use of local names and places throughout made it more familiar and was a nice touch.]

And the whole feel-good show ended with a very positive message that the show had taught us that we should all look after each other more.

There was lots of singing and dancing too. Not only from the three aforementioned cast, but also there were two teams of young female dancers used in this production, who, if I am to understand correctly, come from Infinity Dance. [I think I saw 'Red Team'] They were all dressed in Brownie uniforms throughout and not only danced but also did little bits of acting and speaking, with one of them coming on half-way through to sing a lovely solo 'On My Own'. I really loved the idea and applaud the company for incorporating young local talent into their shows. Not only that she did sing it really rather well, and the quality of dancing was much better than a lot of larger scale professional pantos I have seen recently too!

The only fly in this otherwise unsullied ointment was having a Father Christmas. This just spoilt what would have been a damn-near perfect show. It is bad enough that we have to try and explain to our youngsters why and how he manages to be in EVERY store and EVERY centre all at the same time, without having to try and explain that he is only an actor and it's not the real one etc....! In our modern times, they find out all too soon anyway, so please don't spoil the magic for them before time!! There was absolutely no need and the play stood up quite well without it!

It was a little long; running at 75 minutes without interval, and I would have liked a proper curtain call. But all in all it was a most fitting finish to the season.