Where do I start with this? It really is not in anyone's interest to write or read a negative review, and I really don't like having to do so; but sadly with this particular production, trying to find something positive to say about it is a little like trying to find compassion inside Jeremy Clarkson!

The premise for the story, as far as I could tell yesterday, was that each of the sisters, between their annual get-togethers at a local pub, all receive either bad or good news which they try to share on that occasion; the most devastating of which is that one of them has terminal cancer. She is the eldest of the group and holds a secret which she unburdens at that occasion, namely that she is the real mother of one of the sisters, the orphan that she adopted. 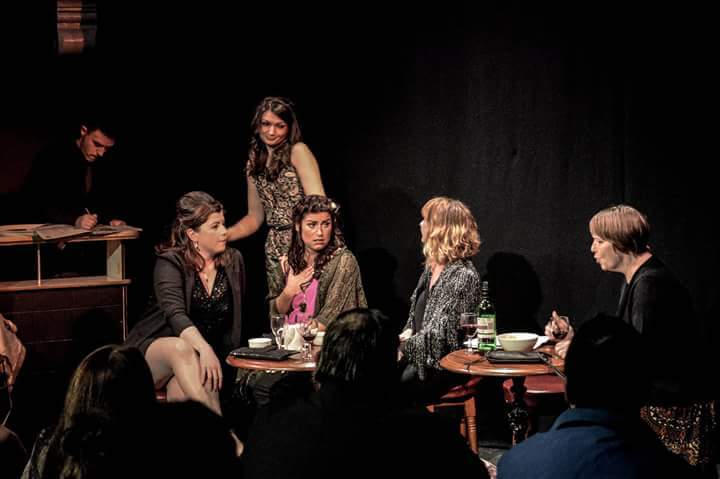 I have been told that what was presented yesterday was both only the first act of a complete play, and was not the finished version of the script. I would advise that before you perform any more of it the script is taken through several radical rewrites. I am not trying to be supercilious in any way here, because the actual base idea behind the script / play is a solid one, and I am also lead to believe that the writer, Marie Greenhalgh, normally works in the TV medium which makes a lot of sense when faced with the play as is. What we as audience were given yesterday was a bombardment of tiny scenelets each introducing at least one, mostly two new characters without any explanation as to who they were or their relationships to each other, and then the final, very long and extremely boring scene where only the main characters appear (including two new characters in the form of town gossips, which need to be cut from the script) and the lesser ones which had been earlier introduced never appeared again. It reminded me of a Coronation Street episode. [And I am absolutely no fan of Soap Operas!].

However, what I would suggest is to cut at least 6, hopefully more, out of the enormous cast of 13 characters from the play, and lets concentrate on what is relevant and important. Give these fewer characters more in the way of both back-story and depth. Do away with the idea of improvising live on stage within a set piece. It's a very artsy drama school idea which really doesn't work in practice unless you are extremely skilled, and make the dialogue wordier and deeper. This is a play, not television where visuals are more important.

That's my advice for what it's worth; take it or leave it. But please don't try to do any more productions in its current state!

The protagonist in the play, the lady who receives the devastating news, was, thankfully, the best and most convincing on stage, {Beki Whitney}. Without that, the play would not even have been watchable. She too, had for me one of the more authentic accents on stage, which went from good through bad to the damned right ugly. The play was set on the west coast of Ireland, and unless the area has been taken over by the League of Nations recently, then a lot of work on accents is required.

To be honest, and also fair, I really don't see the point in my dissecting the play any further. I don't see that that would serve any purpose at all. I would however be very happy and very interested in coming along to see the play once you have taken the advice of dramaturges and theatre specialists to see how your story can become a very compelling and tragic stage drama.