Now what happens when you are told not to do something? Inevitably you do it! And so it is with the Gruffalo's child (Sophie Alice) who has been told by her father, the Gruffalo himself, that no Gruffalo should ever set foot in the deep dark wood.

Her natural curiosity overcomes her and she and her stick man companion venture forth meeting on the way Mouse (Catriona Mackenzie) and Duncan MacInnes' succession of predatory characters - a snake, an owl and a fox to name but three.

The winter landscape is excellently captured in Isla Shaw's design of cave and moving trees, atmospherically lit by James Whiteside. Together with some catchy songs and routines, this 55 minute version of Julia Donaldson and Axel Scheffler's popular sequel to The Gruffalo rattles along in an entertaining fashion engaging with its relatively young audience (most of whom I suspect are totally familiar with the story) by encouraging them to become involved at various points in the show.

Tall Stories Theatre Company certainly does seem to have a knack of knowing what their young audiences want and, consequently, the trio of performers exude confidence and charm as they unfold the story in song and movement which seem, clearly, to be key features of the company's style. Perhaps some of the jokes went over the younger members of the audience's heads such as 'Mice Crispies', 'Mouse saka' and 'Gruffalo Crumble' and occasionally the slickness of the production appeared to be a little mechanical and lacking in spontaneity (from an adult perspective) but observing a young audience that listened attentively throughout it became obvious that they were totally enthralled. And that is what creates theatrical magic!

The Gruffalo's Child continues at the Guild Hall in Preston until Saturday. http://www.prestonguildhall.com/events/view/241 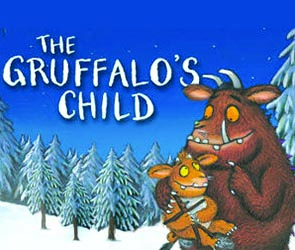