8 years after her last visit Mary Poppins has arrived back in Manchester at the Palace Theatre and with the might of Disney and Cameron Mackintosh heading up the production team you should expect one of the biggest shows to hit the city this year. Sadly, it doesn’t quite live up to all the hype and expectations as I found out last night.

The story of Mary Poppins is one most are familiar with. Following a procession of nannies trying and failing to look after the Banks children the magical Mary Poppins appears out of literally nowhere and transforms the lives of both the children and their parents. With the help of chimney sweep Bert, the children are taken on a magical journey to places brought to life through the paintings Bert creates outside in the park.

On the main page of the programme from tonight it says ‘Mary Poppins starring Zizi Strallen, Matt Lee, Milo Twomey and Rebecca Lock’, however the truth of the matter is that the stars of this production are without question Michael and Jane Banks, played tonight by Lewis Fernee and Lucy Simmons. At each and every point during the show they out shone their elders. With bucket loads of confidence and strong singing voices their performances were worth the ticket price alone, future West End stars in the making, without question! 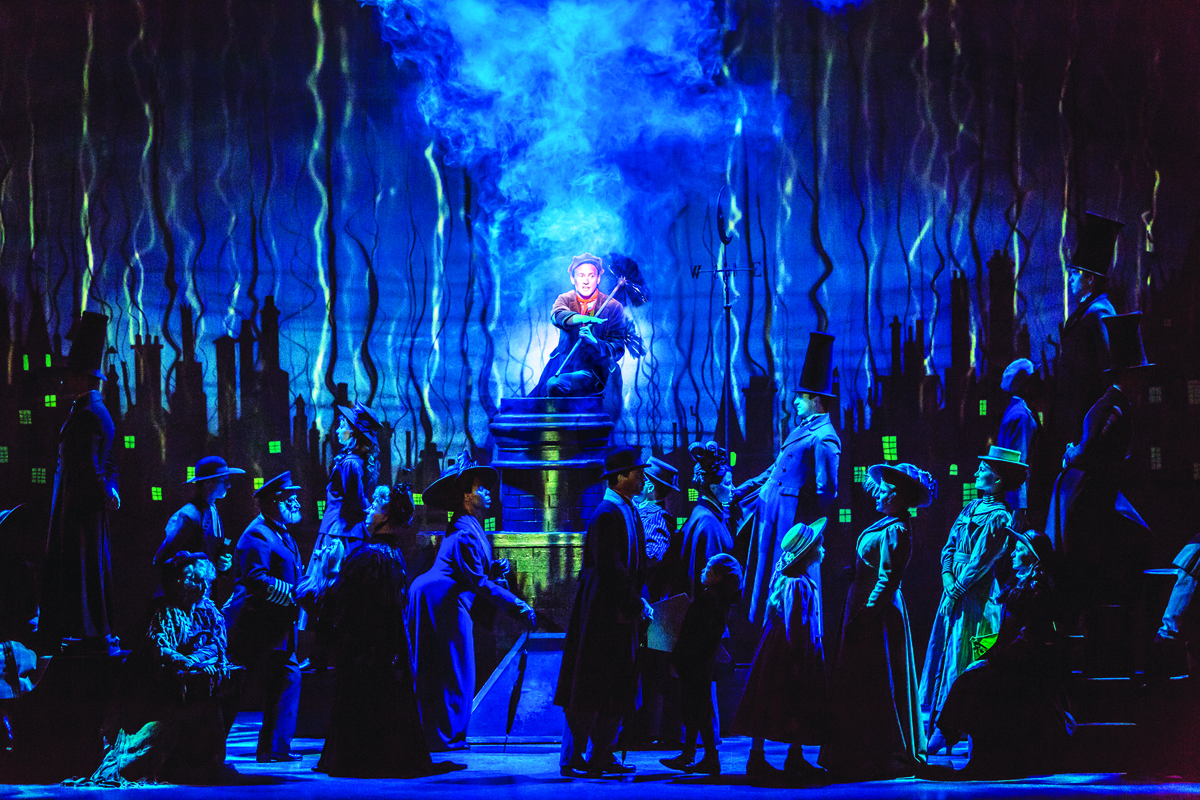 The set is impressive and on a grand scale. A full size house that rolls from the back of the huge Palace stage, opening up like a storybook as it travels to reveal the families living room and staircase, the children’s bedroom and the roof of the Banks house are the main three pieces. All, are as I mentioned impressive if not a little bland in their colouring. The colour was saved for the sequences where Mary took the children into the fantasy world of Bert’s imagination with a huge lighting rig transforming the stage. The arrival of an over-sized replica of Mary’s umbrella which opened and rotated above the stage in the second half was possibly the most confusing thing I have seen on a stage in a while, what was the point of it? The staging was further enhanced with clever and subtle projections throughout which were pinpoint in their positioning and hugely effective.

The sizable ensemble worked hard throughout the evening executing the choreography of Matthew Bourne OBE and Stephen Mear to perfection although some of the sequences appeared to be there just to fill time. This was especially the case during the time the children’s toys came to life and danced in their bedroom.

On first glance the cast list for this production is impressive with a large number having extensive West End experience, and on the whole they were as impressive as their CV’s implied. Rebecca Lock as Winifred Banks was delightful and the pick of the adult cast. Sadly her husband, George Banks played by Milo Twomey was at the other end of the scale. Preoccupied with his work rather than his wife and children, his portrayal of the character was very one dimensional and without emotion for most of the time. Jacqueline Hughes (Katie Nanna), Wendy Ferguson (Mrs Brill), Grainne Renihan (Bird Woman) and Wreh-Asha Walton all deserve special mentions for superb performances. 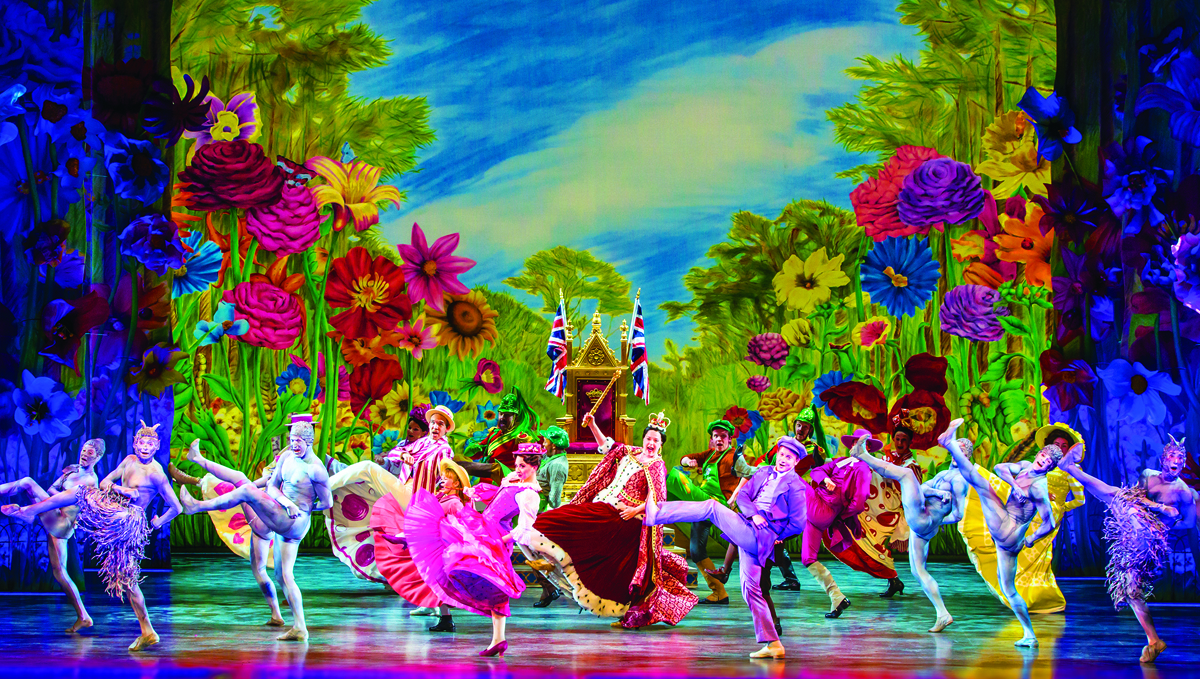 The billed stars of the show Zizi Strallen (Mary) and Matt Lee (Bert) had huge shoes to fill and Lee did a fine job proving he is both an accomplished singer and dancer. The ‘Step in Time’ routine in the second half was a complete show stopper and drew the largest ovation of the evening. My only critic of Lee was that his Cockney accent slipped into an Australian one from time to time. Lee has previously played Bert in his native Australia back in 2011 where he won a best actor award for the role.

I have left Strallen until last in this review as I was not quite sure what to think about her portrayal. There is no question whatsoever that she is a huge talent with a stunning voice and an accomplished dancer. I just thought her interpretation of Mary was a little over the top and almost robot like at times as she glided about the stage. I would have liked to see a softer, more human portrayal. This takes nothing away from Strallen’s wonderful performance in this role, more a personal wish for myself.

Musical highlights included ‘Supercalifragilisticexpialidocious’ during which they correctly pronounced the word backwards, ‘Feed the Birds’ and ‘Step In Time’ of which I have already mentioned. All of these well-known songs were played by the superb 12 piece orchestra under the very able direction of Ian Townsend.

One of the triumphs of this production were the magical elements. There was hardly a scene went by without some illusion taking place on stage, no matter how big or small. Mary’s bottomless bag was a joy to watch as item after item appeared from within it defeating every law of physics ever written. There were also some illusions, or stunts if you like, where there was no attempt to cover up how it was achieved. This mainly applied to the various flying sequences and despite being glaringly obvious didn’t seem to detract from the magical sight.

Make no mistake this is a good show, at times very good, and tonight was enjoyed by the majority of the audience but with the names of Disney and Mackintosh adorning every poster you expect so much more. It was at times very slow and mundane to watch and I left the theatre a little dejected but also humming along to ‘Step In Time’, was I expecting too much from the beginning?

Mary Poppins continues to play at the Palace Theatre in Manchester until March 5th and tickets can be booked at http://www.atgtickets.com/venues/palace-theatre-manchester/