Z-Arts Theatre is fast becoming renowned as Manchester's premier theatre for children. Not only do they produce their own original work, invite both UK-based and European children's theatre makers to perform there, but they also hold regular workshops and activities for children from the local community.

With all this in mind, then you would expect only the very best when watching one of their shows.

Their latest production, Sleepover, however was just screaming budget! It was a 50 minute show for children 5+ which was set on the main stage at Z-Arts. In effect a one woman show, which a little technical assistance from a man sat on a table at the side; with the only set a small bed with several mattresses piled on top set centre stage. The stage looked very bare and uninviting. Stark and unfriendly. Not the kind of atmosphere that I would have thought engendered youngsters' feel-good factor; especially when coming from a front of house which is busy, alive with colour, spectacle and friendliness; where the children can do craft activities free of charge prior to the show; suddenly to be plunged into the dark, black, inhibiting world of theatre.

The actress herself stood on the stage and welcomed the children as they came in, but it was a token gesture only.

The actress, Louise Fazekerley, dressed in pyjamas throughout, did much to try and involve the children. Her manner was pleasing and friendly. I enjoyed the idea of recording the audience's voices and using them later in the show, this was a really nice idea; but when they were played back we should have been reminded that those noises were ours - by the time they did happen most of the children had forgotten that and they went unrecognised. All things technical - the recording and the background music - were the responsibility of the man at the table on the stage, Lee Affen. 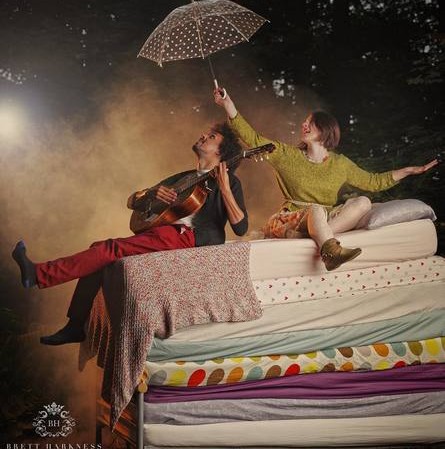 The biggest problem I had with this presentation was the choice of space and how it was used. For such a small and intimate production, the audience - particularly the children - needed and wanted to be much closer and to feel more a part of the story. Would it not have worked in the round? Would it not have been better to abandon theatre seats altogether and ask the audience to sit on pillows and duvets themselves in a space whilst the actress acted in amongst and around them? You had already asked the children to come in their pyjamas and onesies, but this idea, which was a good one, fell completely flat once in the theatre, where they were all seated on raked theatre seating away from the action on the stage.

Admittedly, there was one occasion when you needed four young volunteers to carry the umbrellas, and there were some panto-style audience responses throughout, but it still felt very much like an us and them situation.

The story was simple and clear. A young girl lives with her mother and step-father, and every weekend goes to her real dad's to 'sleepover'. She is afraid of dogs and she has a naughty Nanna with whom she Skypes. Her Nanna advises her to help someone, whilst the story of The Princess And The Pea, which is her favourite book, read to her by her dad, advises her to be kind to animals, and the nightmare about a big black dog she had at the beginning of the story, turns out to be a stray and loveable black dog which her dad takes in and looks after. There is a kind of moral to the story, and the themes based loosely on the Princess And The Pea.

The same bed was used for both her mum's home and her dad's, and the changing of the duvet on the top was insufficient.

All in all, I think there was much to like within both the concept and the acting, and it was certainly age-appropriate; but I found the directing confusing and unfocused, the style of presentation too 'theatrical', the set too bare and the whole thing not all-encompassing and welcoming enough.