Boeing Boeing at the Oldham Coliseum takes the art of reading an airline timetable to another level!

Set in the heart of Paris lothario and Parisian playboy Bernard (Robin Simpson) lives a secret life engaged to three women at the same time, a secret only he and his faithful housekeeper Bertha (Gilly Tompkins) know. With all three women working for different airlines careful planning using the airline timetables in theory should ensure the three shall never meet.

American hostess Gloria (Laura Doddington) is preparing to leave for her trip to America when an old school friend of Bernard arrives unannounced. Not having seen each other for 11 years Robert (Ben Porter) is invited to stay while he finds somewhere to stay in Paris. Once Gloria leaves Bernard confides in Robert about his secret life of Polygamy.

No sooner is the secret revealed Gabriella (Maeve Larkin) arrives fresh from her Alitalia flight to stay for 2 days, but not before Bertha has changed the master bedroom décor from an American to Italian theme!

Finally German Gretchen (Sarah Lawrie) arrives for her stay announcing that she will stay for 3 days instead of two which causes Bernard too hurriedly change his plans as Gloria is due back before Gretchen’s departure. Sound complicated?

As this farce plays out both Simpson and Porter are fantastically energetic as they fight to keep the women from meeting each other as things go from bad to worse thanks to weather delays and the early arrival of flights. Just how they remember which door is due to open next is a mystery and goes to prove the show has been rehearsed to perfection.

Doddington, Larkin and Lawrie as the three hostesses are perfectly cast and their interaction with Simpson is good, however the threesome’s scenes with Porter are so much more. Porter’s fraught and panicky persona is a joy to watch as he becomes more and more desperate to protect the secret of his long lost friend.

The entire plot relies on the countless interruptions from the housekeeper. Tompkins has created a beautifully crafted character in Bertha with signs of Mrs Overall peeping through and tremendous comic timing and mannerisms.

A stunning set from Michael Holt and lighting by Jane Barrek provide a perfect backdrop for Robin Herefords direction to shine.

Boeing Boeing continues at the Coliseum until 6th June. 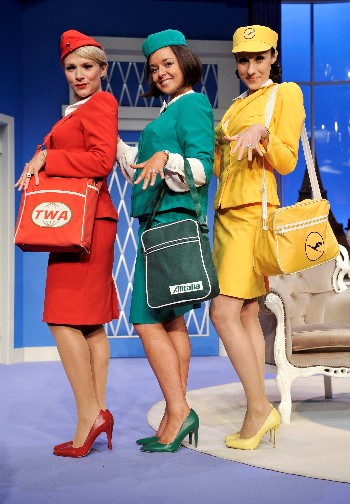