Being familiar with this play I was really excited to see how certain parts of Macbeth at HOME in Manchester which opened a brief residency tonight would be performed.

The play began with a battle putting it in context, followed by the appearance of the witches. The witches were wearing nude body suits, and performed various movements and actions to deliver their lines. This was amazing, as the movements reflected feelings, and gave the start of the performance an atmosphere, showing the witches to be somewhat supernatural and different to the other characters.

The next part I found interesting was the introduction of Macbeth (Anna Maxwell Martin) and Banquo (Prasanna Puwanarajah). This was after a soldier had recalled their account of the battle, with numerous other soldiers on stage, including Macbeth and Banquo in the corner. You don't notice their presence until the witches’ movement introduced them, which I thought was incredible and highlighted how much influence and control they have on Macbeth throughout the play. The speech which followed, delivered by Macbeth was also incredible, his eye contact with the audience really helped a connection to be formed and further showed just how transfixed he was with the witches’ prophecy.

The scene which sees Duncan (Nicholas Burns) arriving at the Macbeth’s castle was very exciting. It was seen as a celebration which showed various cast members dancing and repeating the previous words of the witches ‘Macbeth hath won.’ This was a wonderful portrayal of the scene, as it distracted from the reason why Duncan was at the castle with choreography, but also reminded us by repetitious words.

I really liked the way the witches portrayed Fleance in the following scene. After their initial appearance, one of the witches put on army boots and was then Fleance once Banquo had entered. This showed the witches to be connected within the story even more, this again was shown later in the play when the witches skipped and ran around as ghosts being Macduff’s children. 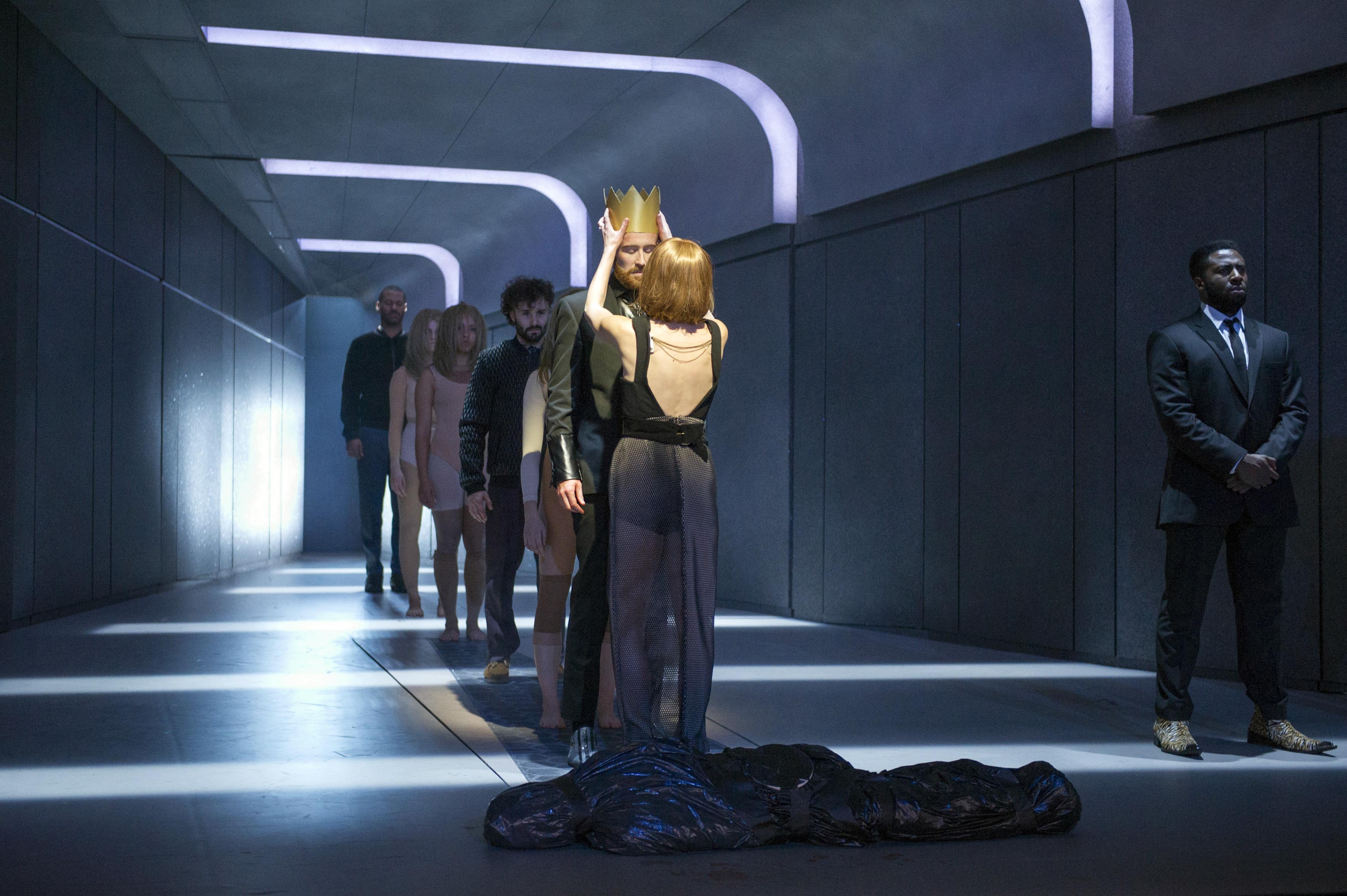 The use of a metaphorical dagger by Macbeth highlighted the intensity of his feelings in the perfectly executed ‘is this a dagger I see before me’ speech. Following from this, once Duncan had been killed the blood splattered Macbeth appeared, and the dynamic between him and Lady Macbeth was marvellous and further showed the impact his actions would have.

The knocking which then followed was performed in a really remarkable way for me. It was choreographed and showed two men to be jumping in time in colourful shirts. I thought that this was a really clever way to delay the audience finding out more about the result of Duncan’s murder.

Once everyone had found out and was shocked by the murder and Lady Macbeth is seen to faint, the next part of the play was the incredible banquet scene. For me, what stood out was that the witches were always on stage, spinning banquet plates round at varying speeds to depict the mood of what the characters were saying. The appearance of Banquo’s ghost was very disturbing, showing him to be sat in Macbeth’s seat with a plastic bag over his head. In fact, the plastic bags which portrayed death generally throughout the play astounded me, as they showed the death of the character in an interesting way that cut them off from the action, and left me wondering how on earth the poor actors were breathing!

The next scenes which followed included a lot of death and violence and were equally as incredible as those before. The ghost of Banquo was seen to be situated on stage narrating parts and laughing in a sinister tone making it quite eerie. The characters ran back and forth intensifying the mood, and then Macbeth appeared from a trap door, and came to his fate and was slaughtered.

This was a wonderful contemporary production, which included exciting and innovative choreography, and interesting and original music. Each member of the cast gave an excellent performance truly meaning every word they were speaking.