The Royal Exchange's main house production is the curiously and perhaps rather misleadingly titled 'Wit', by Margaret Edison. A rather brave choice of play to be part of Manchester's, nay, the north west's premier independent regional theatre's season, but for me it was certainly a choice that paid off a thousandfold.

I went with no preconception since I knew neither the playwright nor the play, and since I am coming to this play rather late on in the run, and all the other press have already given their critiques I have deliberately avoiding reading any in order to be as unbiased as I possibly could be.*

To describe the play in simplistic terms really doesn't do the play any justice whatsoever. It is both humorous and heart-wrenchingly touching at one and the same time. It is direct and cuts like a knife at your very core, and yet distances itself from you at one and the same time. It challenges you, it educates you, and it entertains you in equal measure. And its subject matter is malignant ovarian cancer and the metaphysical poetry of John Donne!

The play is superbly written. The quality of the writing is astounding and I was wooed with that before even beginning to take much notice of the acting, which was from all concerned utterly brilliant!

Over the years I have seen many productions at The Royal Exchange, with the first being The Nerd way back in 1982, and few of their offerings have touched me or affected me quite like this one did last night. It starts with a totally bare, clinical green stage, with corridors in the same clinical green leading off on opposite sides to two identical clinical green swing doors. We are in a hospital. Enter Dr. Vivian Bearing dressed in hospital gown and pink baseball cap, a shaved head, and attached to a mobile monitor. Her first words are straight to us, the audience, and are a direct challenge. And from that very first syllable no-one really knew whether to laugh or cry, but everyone, and I mean everyone, was completely engaged and came away from the theatre last night agreeing on one thing. It was a very difficult play to watch, but the effort from both actors and audience was worth it. 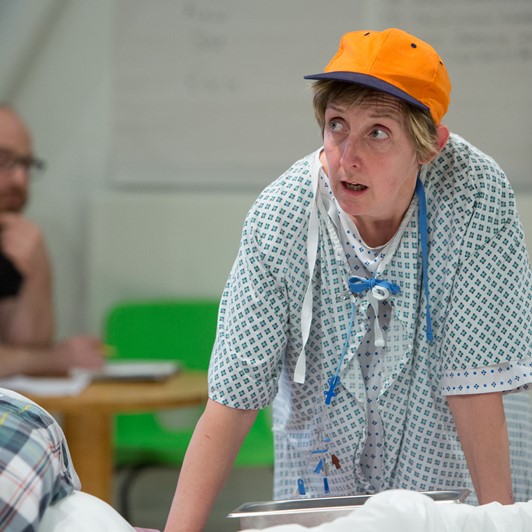 To sum the play up very briefly then I would say that the play is actually a play within a play in the sense that the main character is acting out her own life and breaking down the forth wall for us all the time. She talks to the audience and tells the audience what is happening and how she is feeling with her own brand of acerbic humour, but then with the other actors we are back to the traditional idea of watching a play. She, the protagonist, Vivian Bearing is a fifty year old lecturer and expert on 16th century poetry specialising in John Donne, which she never lets anyone forget! She's a hard nut and a bit of a loner. She has never married, and has few friends. She has been so busy and wrapped up in her work, that even an unusual and painful cramp in her stomach had to wait until she had kept yet another work deadline before seeing a doctor, and by then, it was seemingly too late. She was diagnosed with advanced metastatic ovarian cancer, and despite the doctors' best efforts she has only a short time to live, which she acknowledges to us right at the beginning of the play with the very Bearing-esque quip, ' It's not my intention to give away the plot, but I think I die in the end.'

And yes, she does. And strangely the only part in the whole play that really didn't quite work for me, or that I found too 'stagey' and slightly out of sinker with the rest of this otherwise superbly directed piece of theatre, was the moment she became a ghost to watch her own resuscitation attempt up to the end of the play.

If North West End had an awards scheme then I would, without hesitation, nominate actress, Julie Hesmondhalgh for Best Actress. Her portrayal of the cancer-ridden caustic-tongued intellectual was unbelievably good. The powerful writing, the very sensible and firm directing, and an excellent supporting cast helped her along the way, but it was, nevertheless, a truly brave, stark, emotional and bravura performance.

The most notable supporting actor was a young doctor at the hospital who had attended her course on metaphysical poetry as a student, and their moments of mutual acknowledgment; I can't call them any more than that, failed attempts at trying to speak to each other, failed attempts at trying to befriend and show kindness to each other; were so very real I had a lump in my throat. He was Jason Posner M.D. played by Esh Alladi.

Wonderfully minimalist in concept, and using only those props necessary, such as a chair or hospital bed, letting the beauty and brilliance of the writing and acting tell the story. This was absolutely the right way to go, and was coordinated and overseen by designer Hannah Clark and Lighting Designer Jack Knowles. All under the very solid and sensible (and never too sensitive) direction of Raz Shaw.

I know it was a mid-week performance towards the end of the run, but that notwithstanding, I was surprised that there were so few in the audience last night. Admittedly it is not going to appeal to younger theatre-goers, nor couples looking for a great night out, which does limit your potential audience, but still, the theatre was only half full. That's such a pity, truly.

*...and I shall now go and read what other reviewers have had to say about it!