“Oh I do like to be beside the seaside” but this time it’s not a first in New Brighton, it is a return to the capital of variety; Blackpool, and the intimately welcoming Grand Theatre. A beautiful theatre that just has to play host to a show of the same nature - Miss Nightingale - a show written and arranged, musically-directed and produced by Matthew Bugg (who, as well as a more than just ‘triple-threat’, started as a dancer before pursuing sound design) of which this was his first written work! Pretty impressive and surprisingly so.

Sheffield-based Matthew (who plays the piano throughout, as well as other instruments, as do the whole cast) and his small team have clearly worked hard to create a very authentic (right down to the costumes and announcement at the front of the programme which makes reference to air raids, which we hear two sirens for at the start of both acts), emotive, heartfelt, sincere and passionate piece of theatre based on his well-written plot, characterisations and outstanding music that tells the story of wartime London during World War II where ‘two men struggle in the shadows’ to keep their feelings under control and out of sight while ‘a saucy new star is thrust into the spotlight.’

‘In wartime people will do anything to survive and the biggest challenge is to trust your heart’ and this show has the perfect balance of unexpected comedy in contrast to the well-timed and presented drama, and proves “that’s the thing with this bloody war, they still know how to have a good time!” (In more ways than one). 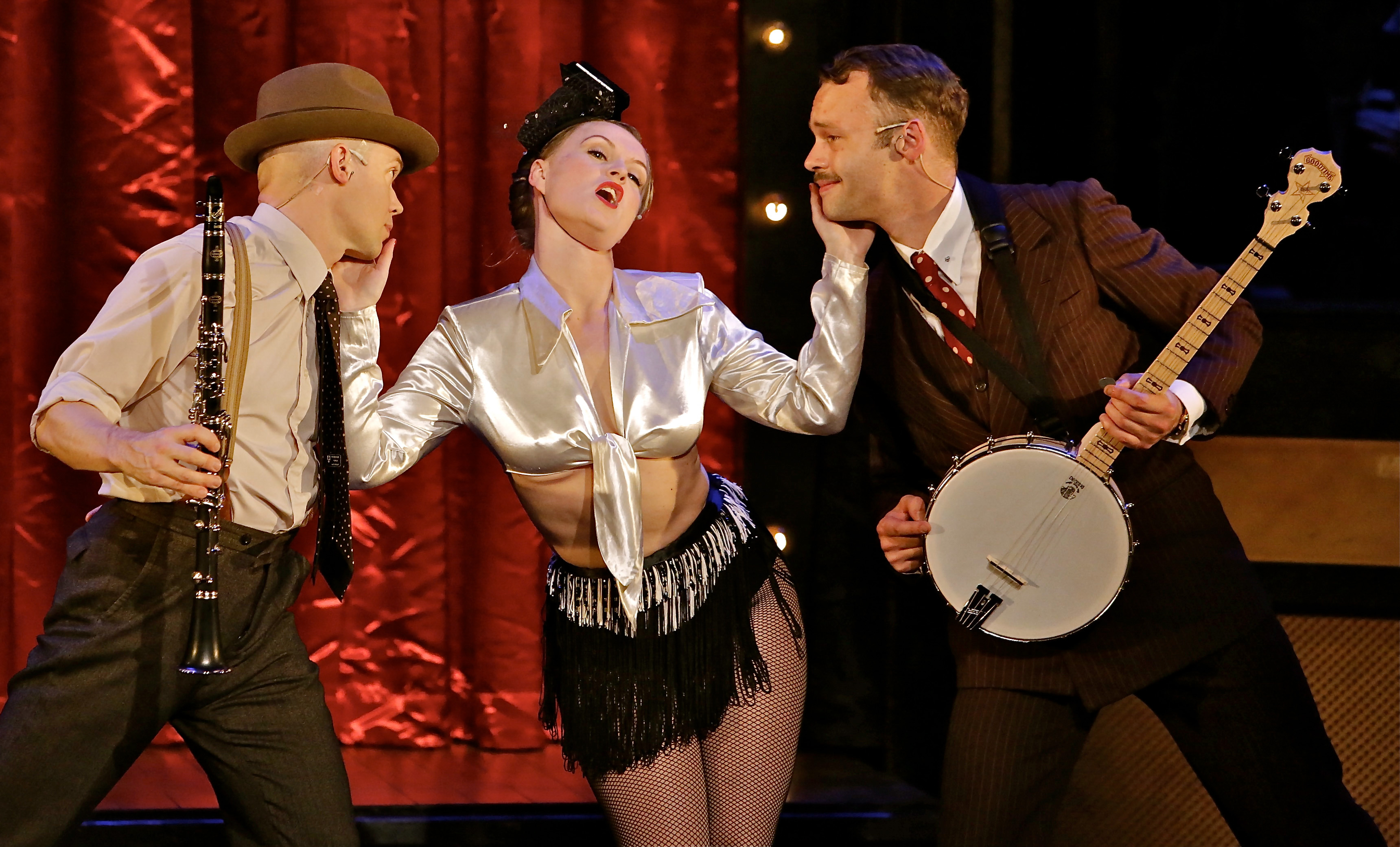 Welcomed into the auditorium by a sole pianist who set the mood and scene, we first meet street musicians George Nowodny (Conor O’Kane) and Bill, who we later discover to have been lovers, who start a triplet {i.e. duet by three}; “Come Along Mister” before being joined by Basil Fawlty-like/John Cleese-ic Sir Frank Worthington-Blythe (Nicholas Coutu-Langmead) who evidently holds the forbidden secret, setting off the first element of irony. With the cast ‘shifting scenes’ themselves, as well as playing a selection of instruments each - from percussion, piano, trumpet, double bass, glockenspiel, ukulele, violin and reeds - you get a sense right from the start that you are in for a treat as you relax into your seat, open-minded about what is to come.

After the subtle introduction to the LGBT theme, we see that Sir Frank is a producer or talent scout looking for something special to promote. We meet northern couple Maggie Brown (Clara Darcy) and Tom Fuller (Christopher Hogben) as Maggie - a nurse by day - auditions for him with the slightly arousing “Let Me Play On Your Pipe”, a song that sets the cheeky and euphemism-laced tone which comes mainly in her solos once she is signed to Sir Frank’s contract. Other amusing numbers include “The Pussy Song”, “The Sausage Song” (not giving anything away with the titles!) and “Piano Man” where she proves her flexibility as a performer, ON the piano! George’s “Meine Liebe Berlin” is lovely as he “[tries] to bring back the old Berlin” and “Stand Up and Be Counted” and “This Man of Mine” are both powerfully passionate, but “Some Else’s Song” is a great finale in celebration to a commended composer.

A love triangle forms when Sir Frank (I knew I should have just called him ‘F’) follows his attraction of Jewish pianist George, before realising that his feelings should remain hidden from the public eye and deflecting speculation by proposing to his amazing act. I honesty couldn’t gauge the audience’s feelings or reaction to the same-sex kiss but it was brilliantly crafted and, I hope, respected. Later, in a moment of weakness, Maggie ends up pursing George for a night and so the web forms…

Matthew clearly isn’t one to sit back and just watch his work be presented without getting involved himself, nor is his partner Toby - and why shouldn’t they? Both accomplished musicians and actors, they provide much of the accompanying for the acoustic soundtrack, along with Hogben on percussion. Matthew plays Maggie’s brother Harry Brown, as well as Bill in the opening song, playing the accordion (he did confess after the show, very admirably, that he has learnt some of the instruments as he has gone along the show’s journey as he has wanted to add extra instruments into the score). Toby plays double bass and performs as the caretaker, dressing room assistant and a waiter/greeter/butler (as well as marketing the show). All roles are well-played with realism and chemistry with their peers.

With the story portraying a trio’s struggles through a time where various forms of love and affection were simply not tolerated - shown through he reference to a newspaper article stating that men from Aberystwyth were imprisoned and punished for being homosexual, some of whom committed suicide (as fate would have it, today was the Time To Talk day to help those suffering from mental illnesses, and from what I remember it is the commemorative anniversary of the end of the Holocaust) - and the tangling of a web of protection, dignity and fear or risk of blackmail; it is no surprise that this show has succeeded.

With lovely lighting effects creating the right moods and tones accentuating Carla Goodman’s design, my only comments - all good - would be that there is a very quick time-lapse between the club and bedroom and the progression of Frank and George’s ‘relationship’ (which enables the essential presentation of a gift which is used against him) and the fight scene could have been a touch more intense in order to further the contrast between the comedy and seriousness (not complaining, it’s amazing as it is). But that is a very minor comment in an excellently entertaining offering.

And so, to quote the show, you better “live each day as if it’s the last” and head down to see this wonderful show where the songs are well-sung, movement well-directed (by Karen Simpson) and the parts well-cast. This show is certainly something special and the writer’s name is one to be remembered and monitored for the future.

Playing until Sat 6th Feb in Blackpool, before the show heads to Coventry and returning north to Buxton. Tickets can be booked via the show’s website: www.missnightingale.co.uk and you can even hear samples of some of the songs on Soundcloud: soundcloud.com/matthew-bugg-2