Written by William Wycherley in 1675, it is possibly the Restoration era's most notorious play in that the whole play can be taken as an allegory for the time's sexual morals and attitudes amongst city high society. It is a bawdy comedy, full of lewd sexual innuendo. Little wonder then that for a long time this play was considered too saucy for the stage, and indeed was replaced by a much blander version entitled The Country Girl, which now has, thankfully, been consigned to Room 101, and we are able to enjoy the wit, the fast-moving plot and satirical dialogue, and the outrageous characters with immoral sexual appetites once more.

Just as importantly, this was one of the first plays to be produced on the English stage, after Cromwell and the Puritan ban and the resurgence of the Monarchy, to allow women on stage instead of the usual boy actors. The audiences delighted in seeing women portrayed as equals to men both is sexual desire and in their power of connivance. Indeed it is a woman - and a serving maid at that - who is the major driving force behind many of the plots twists and to male astonishment, reveals a somewhat dissembled version of the plot at the end in order for all to end happily.

The Manchester School of Theatre performed this play at HOME's studio theatre under the direction of Lawrence Evans.

When first taking my seat I was struck by two things. One, how delightful the set was, and two, how disastrous the set was. Allow me to explain. The stage was a perfect 1960s yuppie-pad. Coloured in red, white and black, we were given a house interior fitted and decorated with desirable and fashionable items from that swinging decade - an egg chair, leather recliner, radio cupboard, etc, all semi-encompassed by indoor trellis screens and the front door to the apartment, a sliding door of course. If I were there to watch a production of 'What's New Pussycat?' or attend the stage version of Austin Powers, then all would have been fine, but instead I was to watch a play that was written and set in an era some 300 years previous. 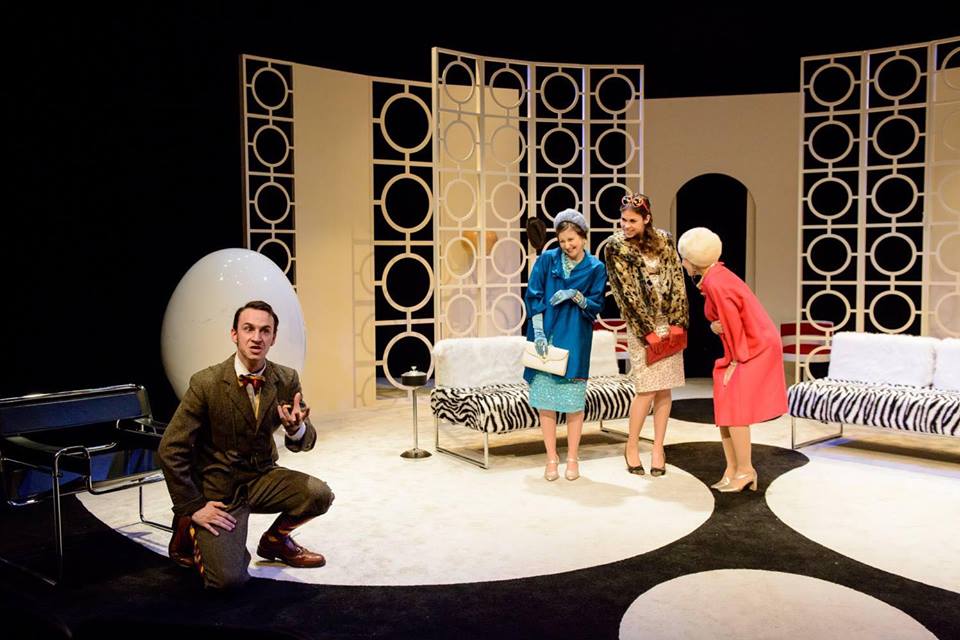 I am absolutely no fan of updating and modernising plays. I have yet to see a play that has been improved by so doing. They were written at that time for a reason - they belie that period and therefore shouldn't be moved. There is no stronger opponent to this than me. So you can see my quandary.

Further, another problem I had with the set was that it never changed. It was the exact same set no matter whose apartment or house we were in, or even when we weren't even in a house at all. Nothing changed. Just a simple turning of the screen to reveal a different colour on the other side, or changing the cushions on the sofa, or basically any small token gesture to indicate the different rooms of the different characters would have sufficed.

However, that notwithstanding, Mr. Evans did his absolute best to woo me. His ideas were first class. Incorporating popular and topical songs from the 60s throughout as scene and mood changers with the cast miming and dancing along to; having them enter and take up faux Ab Fab poses before speaking; using all the clichéd and hackneyed stances and affectations of that decade - all to sparkling effect - did much to bring me round to actually liking this interpretation. The costumes, which were practically perfect, and the smoking also helped.

Further, the commitment, the palpable energy, and the talent of all the cast finally won me over and I started to enjoy it.

Daniel Allen as Sir Jasper Fidget was my absolute favourite actor on stage last night. His naturalness of manner and pleasing delivery, never once forgetting that he was indeed a fidget, was simply delightful. Daniel Harkin as Harry Horner played his part with an air of nonchalance and a wicked glint in the eye, and Amy Balmforth's change from naive country bumpkin to deceitful cuckolder with a lust for London life, excellently measured. It's a shame really that in the end she is the only one who doesn't come out of all the dissembling any better off. Although much has been made of the title of this play, scholars suggesting that it too might be a rather distasteful pun in itself, may be that's why she still stays the country wife.

I am assuming that the students last night were in their final year, and that they are now looking to take that gigantic leap of faith and join the profession. The question I must therefore ask is this - are these actors and actresses at a standard whereby this would be possible and are they talented enough to be able to make a go of it? - And I must answer truthfully with a resounding YES.

Further, I must also ask myself - Was I able to overcome the obstacle of modernising this masterpiece? Did both director and cast produce an air-tight production which worked, injected new life and brought a fresh perspective to the play? - In the main, yes. I came away happy, delighted by the performances, and enjoyed the evening. If you have managed to do that, and you did, then you have worked a miracle. I have been known to walk out of plays after the first five minutes if they are not accurate in their time-setting!