Samuel Beckett’s masterpiece of the absurd has divided audiences since it was first performed in his native French in 1953, but there is something quite pertinent that this is the case, when you consider this is very much a play about contrasts.

On entering The Crucible it is always its thrust stage that captures you with first impressions and here we are presented with a crisp white stage with imposing rocks and stones that are jagged, harsh and cold, standing out against a subtle cloudy-blue backdrop. A seemingly lifeless tree stands with its roots curled underneath which give it a sense of strength that is juxtaposed with the delicate and empty branches at the top. When the characters enter this wilderness they bring with them the life and humanity so desperately lacking, despite their inability to recognise this within themselves.

Vladimir and Estragon, possibly the most famous of tramps, who spend the play waiting for Godot to arrive are brought to life here impeccably by Lorcan Cranitch and Jeff Rawle. Cranitch gives us a head strong and rational Vladimir with a presence that captures both his sensibility and vulnerability effectively. Rawle as Estragon is perfect as his partner, capturing at times real child like and mischievous qualities, which work so well in this waiting game that they play. The pair are genuinely excellent together with the dialogue feeling so natural and truthful throughout, they use the stage so wonderfully to capture the sense that they both long to leave this space but yet something compels them to stay. The real triumph is the tenderness that comes out in their own relationship – there is a real sense that these two would be lost without one another and the bickering and name-calling provides us perhaps with an all too familiar parallel to our own relationships. 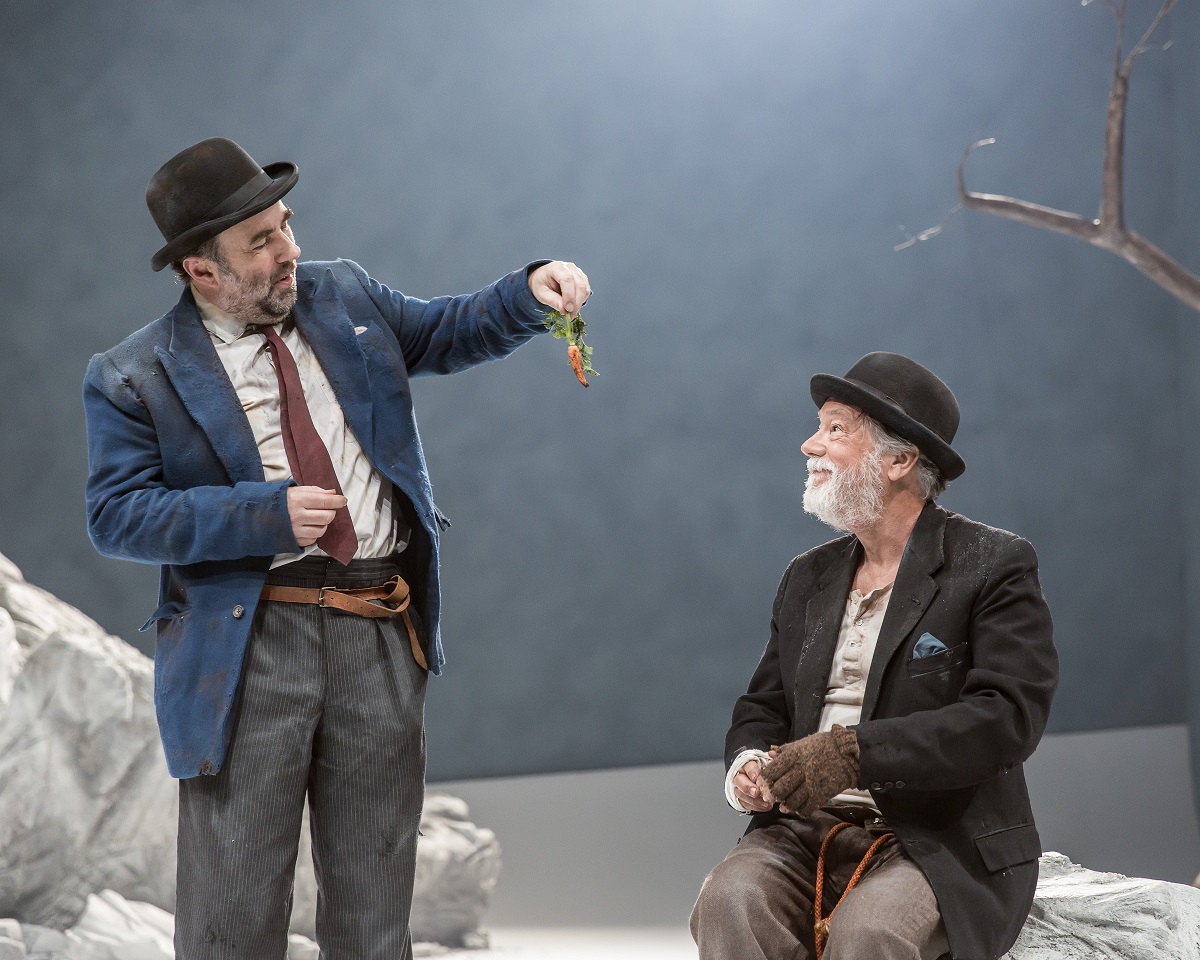 Of course the play is not just about two tramps who seemingly wait and talk nonsense to pass the time, as we are soon introduced to Pozzo whose entrance is signalled by his brash and authoritive voice which rings out across the wilderness on stage as he enters behind an exhausted and almost crippled Lucky (Bob Goody). Richard Cordery’s Pozzo is both compelling and despicable as he cracks his whip and pulls the noose that lies around his slave’s neck, bringing with them a new energy to the play, as Vladimir and Estragon become more child like, standing aside and watching Pozzo wide-eyed and curious as to who this larger than life man is that now invades their space. Here is where the direction is at it’s finest as the choreography in the movement and dialogue between these four characters is captivating as Beckett presents us with questions about how we treat our fellow man. This is repeated again in the second Act when we are presented with a contrasting vision of Pozzo and Lucky that is altogether quite tragic, despite our predisposition of the former character from our first encounter.

Beckett’s play, when staged as well as it is here, makes us wonder and speculate on so many half answered questions throughout. Who is Godot? Will he ever come? Does this even matter? Arguably not. The real message perhaps is about time and how we spend it. Or how we don’t spent it? The missing watch, the circling moon overhead, the sudden sprouting of leaves are all signposts to this, alongside the boy who may or may not have come yesterday. This production is so expertly crafted and staged that there are simply too many good points to talk about here. The importance is that I urge audiences to go and watch this production, a master-class in the juxtaposition between naturalism and absurdist theatre if ever there was, so that they can leave with their own messages to consider and no doubt a handful of half answered questions too. For me through, there was no doubt that this was a play about humanity and how we choose to spend our time, who we choose to spend it with and the impact we can have on others when we enter their space, stay a while and eventually exit.

Waiting for Godot is at the Crucible Theatre, Sheffield until 27th February.