When someone mentions the word ‘circus’, clowns and trained animals are usually the first thing that come to mind. However, not many people think about the acrobatic side of it and the skills involved. Flown is a stage show brought to us by ‘Pirates of the Carabina’ that combines circus skills and music.

Upon entering the theatre the stage in already fully lit and looks amazing, filled with bright colours and the some of the props that will be used in the show, which range from an ironing board to a lamp post, and my personal favourite a toy horse.

The music starts in a very relaxed fashion as the audience are still entering and slowly one-by-one all the performers come to the stage through the audience - it’s as if they are being called. This sets a really good atmosphere.

The real beginning of the show starts with a bang, quite literally as the cast use their acrobatic skills to comic effect to trick the audience into thinking someone has gone wrong. Throughout the show, each of them speak to the audience about how they came to be a circus performer. Some of these stories were inspirational, while others were extremely dull. 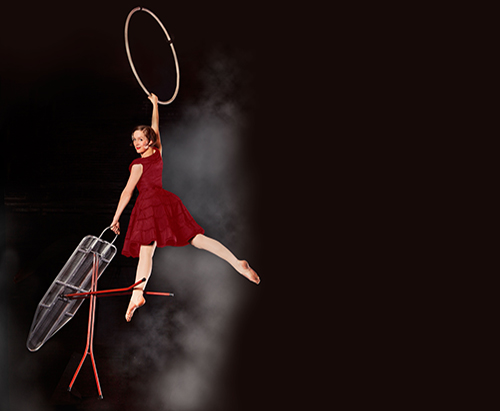 There were a few scenes that were great. The opening scene of the lady with the ironing board being literally made to fly by her lover was quite nice - it was like a metaphor for love. The two younger men using the big hoop were great and timed nicely to the music. However, after that Flown took a turn for the worse. Two characters came on stage to perform on a large pole, accompanied to Celtic music. While the acrobatic performance was great, the singing was painful to listen to and distracted from the acrobats.

It needs to be said at this point that all of the cast are fantastic acrobatic performers. However, I was never really sure if I was following a story or if it was just a bunch of acrobats doing some crazy moves for the best part of 2 hours. My personal interpretation was that they were on a ship, hence the name ‘Pirates of the Carabina’. We saw the flags being raised, waves being represented by white sheets, a lighthouse, and the ropes being thrown out. However, I lost that interpretation when I couldn’t relate some of the scenes to a ship.

The highlight of the show was when one of the characters attempted the tightrope. He was probably the most relatable and genuine performers of the night. Not only did he perform his skill effortlessly, he told a really nice story about how he pursued his dream after constantly being told off at school. In the end he plays homage to his school days with a rather cool trick that goes down well with the audience.

One of the problems with Flown is that the acrobats lose the wow factor after they’ve been performed the first time. Some of the scenes had a tendency to drag a little bit and the skills being displayed became repetitive, even though they were impressive.

As the show comes to a close we are reminded again that we shouldn’t just settle for a 9-5 job to pay the bills. We should be fearless and pursue our passions, which is a really optimistic note to end the show on.

There is a spectacular finale as even the members of the band join in the acrobatics and the atmosphere is lifted again.