The Winter’s Tale – The Barbican (Online)

Written slightly before The Tempest; A Winter’s Tale is a complicated tale of love, madness and regret.   Towards the end of Shakespeare’s writing career in 1608-1612, he wrote four plays which unusually for Shakespeare; had happy endings - Cymbeline, Pericles, The Winter’s Tale and The Tempest.

Cheek by Jowl, formed in 1981 by co-Artistic Directors, Declan Donnellan and Nick Ormerod, have produced work in English, Russian and French and specialize in bringing new life to classic works. Throughout the 1990’s, the Chekhov International Festival regularly invited Cheek by Jowl to perform in Moscow and were asked to form their own company of Russian actors in 1999. Many of their productions have been performed across the globe.

Shakespeare sets many challenges for the directors and set designers, as this play skips through time by 16 years, and this must be somehow demonstrated effectively.

On what initially appears to be a fairly simple stage, with a back drop of white painted planks of wood, also used as benches and a podium later on in the play; the set design is revealed to be multi-faceted and is used ingeniously to depict different scenes of the play. 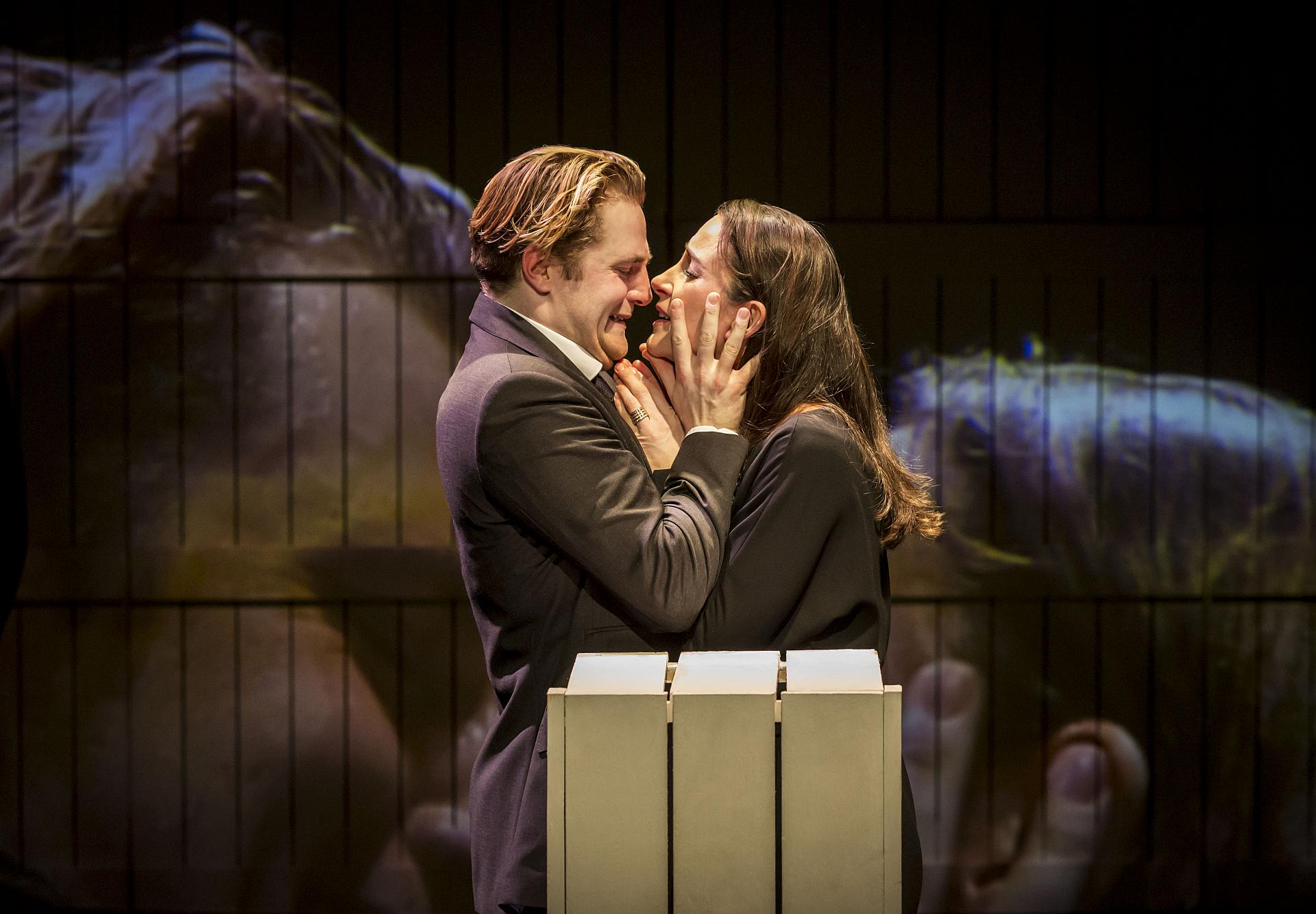 The complicated storyline begins with Leontes - King of Sicilia (Orlando James), bidding his friend Polixenes - King of Bohemia (Edward Sayer), goodbye, after his visit of nine months has drawn to a close. Leontes tries to convince him to stay longer and entreats his pregnant wife Hermione (Natalie Radmall-Quirke) to assist in his pleading. Polixenes agrees to stay, but in doing so, sets the seed of doubt in Leontes mind, that Polixenes and his wife Hermione are lovers. Jealousy clouds Leontes judgement, and he asks his loyal retainer Camillo, to poison Polixenes. After Polixenes flees and Leontes publicly accuses Hermione of adultery; he has her thrown in prison.

Yes, this play is complicated, but this creates opportunities for the director to play games with the script. Declan Donnelllan has infused a huge amount of histrionics from the cast. The first scenes are stripped back as far as set design goes, which works well as our attention is not diverted from the dramatic performances. The casting of Orlando James as Leontes is so on point. James is able to augment Leontes’ insanity, borne from the mistrust of his oldest friend’s betrayal; in his eyes. The way he even attacks his own son Mamillius (Tom Cawte), is evidence that he is losing grip with reality, as it is obvious earlier in the play that he clearly loves his son.

As the play moves on, we see the ingenuity of the set design. Nick Ormerod has incorporated what appears to be a white rectangular box made from the white painted wood planks. This is used as a mausoleum for Leontes/Hermione’s dead son Mamillius; a deck of the ship used by Antigonus (Peter Moreton) as he takes baby Perdita away; and is used as a backdrop for the projections of Hermione and the Bear, that ultimately kills Antigonus. The scene of the bear killing Antigonus could have been accentuated more. The famous stage direction, ‘Exit, pursued by a bear’, lends itself to something a little more dramatic and it didn’t really seem to be powerful enough on this occasion, in its delivery.

The revolving stage worked well in communicating the passing of 16 years of time and the contrast of the comedy from Autolycus (Ryan Donaldson), who played his part magnificently, and the joy of the sheepshearing festivities and betrothal of Florizel (Chris Gordon/Sam Woolf) and Perdita (Eleanor McLoughlin) lend some much needed frivolity to proceedings.

The final scene is touching, the wonderful scene with the cast holding candles, with only low lighting, highlights the statue of Hermione at her awakening.

This play is only available for public viewing on YouTube until 27th April 2020. I urge you to tune in, as the play is both engaging and extremely well executed. Please remember, that to enable theatre companies, such as Cheek by Jowl, (who are unable to produce income from productions at the moment) to keep going, they are relying on donations for income. Please, if you watch the play, also give a donation, which will be gratefully received. Go to https://www.cheekbyjowl.com/support-us/ to donate and HERE to watch.