As a musical theatre lover like many of you, I love the mystique and tantalising melodies in the original Phantom of the Opera, but had not seen its sequel, Love Never Dies.

I have been raised with an appreciation for almost everything emblazoned with Andrew Lloyd Webber’s name, so this show was bound to be something I’d enjoy, but in hindsight I think my hesitancy to watch it ere this came from an inherent desire to keep the sanctity of the original intact. If I didn’t like this show, would it make me like the original less?

That said, I’m glad I took the chance when the opportunity arose to review this show, as my fears were entirely unfounded. Love Never Dies was spectacular, a melodious reconciliation with some of theatre’s best loved characters.

Generously hosted online for free by Andrew Lloyd Webber to help theatre lovers get their fix during quarantine, this production - starring Ben Lewis and Anna O’Byrne, filmed in 2012 at the Regent Theatre, Melbourne - raised its curtain on a melancholy Phantom 10 years after the devastating fire at the Opera Populaire, bemoaning the loss of his beloved Christine. 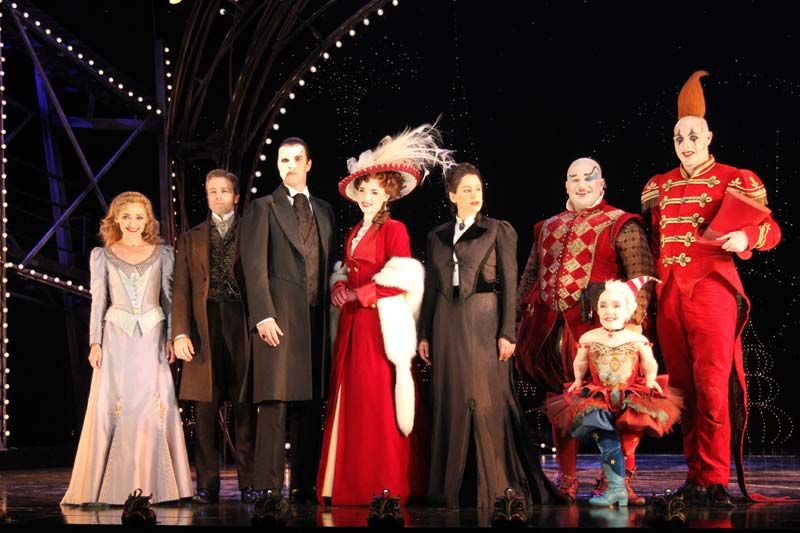 Our first introduction to Ben Lewis as The Phantom was tentative to say the least - I wasn’t enamoured at first, but I was delighted to find that, as both the song and the performance went on, he grew into his role with gusto, bringing this part to life with a haunting intensity that has become the character’s trademark.

We don’t have much time to spend reminiscing with our favourite anti-hero, however, as we are soon enveloped in the surreal, dream-like circus sequence, taking place at "the festival of fun” on New York’s Coney Island. The cacophony of lights, sound and costume is instantly reminiscent of the flamboyant theatricality of Moulin Rouge’s ‘Spectacular, Spectacular’, laced with the sheer peculiarity of Cabaret for good measure.

Just as you’re settling into the new normal - brought tantalisingly to life in the musical number “Only For You”, complete with costumes straight out of the pages of Shakespeare’s surreal comedy A Midsummer Night’s Dream - you’re brought straight back to earth with a bump.

Much like the original, Love Never Dies is a show within a show, but this time focussed on Meg and her mother (who were secondary characters in the original, with Meg an ensemble cast member to Christine’s lead role back in the Opera Populaire). The show picks up 10 years after the original, with the unlikely trio of Meg, her mother, and The Phantom having left Paris for the lights of New York. The Phantom is now the hidden patron of a circus show called “Phantasm”, of which Meg is the star and the mother is the ringmaster behind the scenes.

There are many flashes of brilliance in this production, not least the artful storytelling of the fate of Christine in song. Thanks to the genius of lyricist Glenn Slater, we can stitch together strands of Christine’s story: We discover that she married Raul, has a 10-year-old son Gustav (who plays a larger role in this production than I had anticipated), and her marriage is riddled by destitution thanks to Raul's drinking and gambling problems.

Our first look at our heroine Christine Daaé is mesmerising - she is pitch perfect casting; we soon find to our pleasure that hiding behind that beautiful alabaster skin is an enchanting soprano that was made for the demanding role of Miss Daaé.

Blinded by last week’s performance of the original - with the enchanting Sierra Boggess in the lead role - I wasn’t sure anyone could match her in aesthetic and vocal prowess, but these fears were unfounded. Australian national Anna O’Byrne could easily hold her own in one of the most demanding roles in musical theatre - she was perfect.

Just as you’d expect, there is tangible electricity between the three leads, who all play their parts as lovelorn paramours exquisitely, while - rather than fading into insignificance - Meg and her mother weave seamlessly into folds.

Magnifying this new dynamic is the delightfully clever quartet “Old Friends”, which is sung in the round, subtly showing how old friendships hide deep, insincere undertones - setting the tone for the rest of the show.

As well as being a fantastic addition to the storyline, Christine’s son Gustav is the perfect theatrical device to allow the Phantom to show his new prodigy (and thus the audience) the delights and intrigues of the new underground world of his creation. It’s a wonderful hit of déjà vu, as we see history repeating itself once more.

Again, in familiar parallels to the original, we soon see how quickly joy turns to despair in the dark world of Phantasm, amidst the very familiar undertones of jealousy, rivalry, desire and melancholia we have come to know.

It’s hard not to be completely taken in by the three leads; however, some kudos has to be given to Sharon Millerchip, who was superbly cast in the complex role of Meg. She has a beautiful naivety in her portrayal yet has an electrifying theatricality in the scenes she is performing as the circus’s leading lady, bringing the “ooh-là-là” truly to life.

The crux of the story, however, lies in the fate of Christine and her two lovers. Neither man, nor Christine - and thus the audience - have no idea which way the pendulum will swing, which is dramatic resonance at its finest. Plagued with jealousy, Raul makes a deal with the devil in the enflamed yet utterly beguiling duet “The Devil Take the Hindmost”, which is arguably Lloyd Webber and Slater’s best piece of work in this production.

In yet more creative brilliance, Christine’s long-awaited solo, the show’s namesake, “Love Never Dies, allowed the wonderful set and costume designer Gabriela Tylesova to really come into her own - the costume sumptuous, the staging (peacock feathers that acts as a perfect metaphor) faultless - made even more effective by the intentional positioning of each man stood illuminated in each of the wings, with their eyes lovingly cast on the object of their affection. You can see every emotion in their eyes - euphoria with every look Christine gives to them, jealousy with every look she gives to their adversary.

One recurring line struck out to me in this production: “Beauty sometimes goes unseen” - however the beauty of this production is evident in every costume worn, every set staged, and every note sung - all designed to leave the audience wanting more.

Inevitably, tragedy strikes when jealousy, lust and revenge collide. The climax is completely unexpected, yet radiates true, raw emotional resonance. The perfect end to the perfect show, you finally see who Christine chooses, but the ending is cruelly bittersweet.

It would be wrong to compare this to the original - but this show is a triumph of its own making.

If you’re a novice to the world of Phantasm, you may not leave your seat humming the unforgettable melodies as you do with the original Phantom of The Opera - however, you will acknowledge that you have just witnessed something spectacular: a true sensory delight of music, sound and vision.

Love Never Dies is available to watch for free HERE via YouTube until Sunday 26th April with next weeks offering being CATS.