A contemporary ballet based on the Russian romantic work of Swan Lake, which takes music from Tchaikovsky, Bourne moves away from tradition, having the usually female Swans danced by men. The main subject that runs through the story is mental health, seeing the Prince in many states that leads to his decline.

Bourne’s Swan Lake follows the story of a young Prince (Joseph Vaughan), desperate for his Mother’s affection. His Mother is the Queen (Nina Goldman) and sadly lacks affection when it comes to her Son.

As a young boy, the Prince has a nightmare of a swan and his Mother comes to comfort him but leaves as she becomes nervous of the situation’s intimacy. This is the start of things to come. 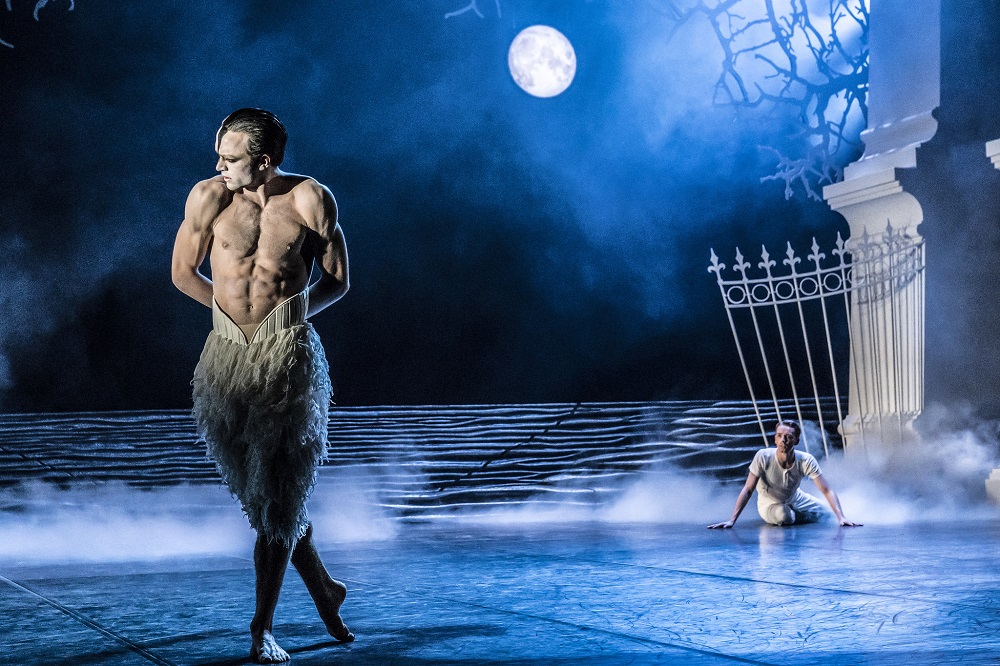 With Royal duties taking over his life, over the years he finds these tiring and tedious and would rather be doing other things. The Girlfriend (Madelaine Brennan) is introduced to the story and brings much needed humour to the piece, although not quite right for the Royal life, she is fun and loves the Prince (Dominic North).

The Prince decides he wants to go out in the real world so visits a 70s disco bar, where numerous styles of dance are used, including classical ballet mixed with forms of jazz and modern dance. While there he spots the Private Secretary (Steve Kirkham) paying the girlfriend to stay away and this makes the Prince angry, causing a fight with a group of Sailors.

After the fight with the Sailors, the Prince is struggling with life and decides he can no longer carry on. He is going to throw himself in to the lake but is saved by the image of a group of Swans flying towards him. This leads to a beautiful section of dance from the male swans, allowing them to shine, showing their strength and elegance through dance.

The Prince is fighting for the affection of the lead Swan (Richard Windsor), who initially rejects him, but eventually accepts him and takes him in to his arms.

As the story progresses, there is a ball at the Palace where a stranger dressed in black arrives (Richard Windsor), receiving affection from all the ladies, especially the Queen, something that the Prince cannot deal with. The Prince loses his temper and pulls a gun on his Mother, leading to him being confined to an asylum, regarded as having lost his mind. Even as his Mother visits him here she is unable to fully express love for her Son.

The final scene is extremely powerful and visually stunning as the Swans return, with the lead Swan, and fight to end the turmoil the Prince is going through.

Windsor impresses in both roles, showing his dance skills to provide the strength of the characters yet able to convey the soft, emotional side. North delivers so many sides to the Prince, taking the character through so many emotions and delivers them with power and caring.

The music for this piece is provided by The New London Orchestra, led by David Lloyd Jones.

The scenery is stunning, creating beautiful scenes without overpowering the stage or the action, allowing the piece to be told, acting as more of a prop to the scene. Costumes are creative and practical.

A beautifully told story, well-acted with stunning dance and fantastic acting, showing you do not need words to convey emotions. Dealing with such a topic, it is delivered with heart, meaning and care. ‘Lit by the flame of mania and danced by the icy water of depression.’

You can watch Swan Lake HERE.