Manchester has a new central arts hub and we couldn’t be happier. HOME opened last night with the World Premiere of The Funfair. With the auditorium of the main theatre still having that ‘new’ aroma the cavernous stage does not detract from the intimacy of the venue.

The Funfair, adapted from Ödön Von Horváth's Kasimir and Karoline, local lad Simon Stephens has moved the setting from the Munich Beer Festival at the end of the 1920’s to a travelling fairground in Manchester. Set over the course of one night this play follows Cash (Ben Batt) and Caroline (Katie Moore) as their relationship disintegrates after Cash loses his job as a chauffeur.

Michael Ryan plays Frankie, a rough sexist thug to utter perfection whilst his girlfriend, Esther (Victoria Gee) cowers in his shadow suffering domestic abuse at every turn until she plucks up the courage to confront him.

Rhodri Miller as John Chase has the best comedy moments in the piece. His questionable attire and shy unassuming ways give way to a more confident persona as his pursuit of Caroline intensifies.

The proceedings are narrated by James Lusted whose tiny frame commands the attention of the audience from the moment he appears on the stage to order the lights to go down in the auditorium.

Ti Green’s stage design is basic but at the same time stunning using a revolving stage to recreate the carousel as well as accentuating the background action. Lighting by Mike Gunning and projections from Louis Price make this show a technical and visual treat, showcasing the capabilities of this new state of the art venue.

Throughout the performance a band play some well-known rock n roll classics hidden behind a glass screen above the stage whilst doubling up as the circus freak show prior to the interval as the Gorilla Girl sings beautifully and changes your perception of her from that first glance.

The Funfair although originally set in the 1920’s is remarkably relevant to this day with politics and poverty being two of the issues highlighted. At times a little slow and disjointed in places, but the subject matter and the cast on stage can’t help but grab your attention for the duration. This play shines due to those on stage and technical aspect of it. 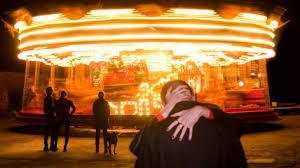