With the future of the industry in jeopardy, it’s encouraging to see local artists working against adversity and creating work. Impressively, Floors Apart by Script Suppliers has successfully and inventively utilised the restricted access to space and equipment to create a professional, full and pleasantly succinct series of stories. By being technically thorough and giving great attention to detail, editor/creator Dan Hubbard helps produce a radio drama which wouldn’t sound out of place on any major radio station.

However, despite all its technical accomplishments, it saddens me to say that this radio miniseries is not a light in these dark times.

Contrived, tedious and obsessed with its own domesticity, it’s a work very much stuck in its own concept and ideas. Any dramatic pulse the piece may possess is usually eviscerated by exposition, and a larger half of the seven episodes feel stagnated and directionless. It’s indulgent on the exacerbated clichés of theatrical dialogue and the mundanity of everyday life (which is certainly not helped when the model of everyday life being recreated is one in quarantine). Worse still, the two are wedded by a wit that is simultaneously too refined for real-life, yet too clumsy for drama. 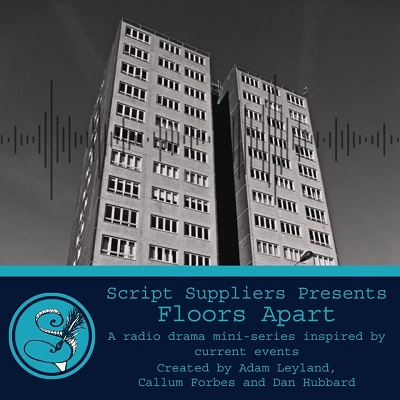 It’s all the things about being in lockdown that bore you, repeated: the meandering conversations with those you live with, the petulant bickering that stokes frustrations from over-familiar surroundings. Even in the circumstances where engaging narrative devices are deployed, none of the issues raised are done so with any comprehension of consequence. In Floor 4, a gambling addict living in poverty is berated by his co-tenant for squandering their last bit of money on a bet, only for the gravity of their situation to be lifted by him winning the bet. What does this tell us? The climax totally diminishes the value of everything that takes place before. It’s a shallow and lazy writing strategy. There is plenty to be said about the tragi-porn sensibilities of Floor 5 and its handling of dementia, and the finale Top Floor which trivialises suicide as a comedic device. For a piece that claims to be ‘inspired by current events’ it’s staggeringly ignorant of the mental health crisis faced by populations in lockdown. There’s much more to this than the simple dismissal of its efficiency as a device but I’m denied by the word count, so in brief: it’s my belief nothing is off limits with comedy, but when subjects are delivered with such vacuity, devoid of the weight they warrant, you lose the tension and thus the relief – the laugh. It’s not a matter of offence or morality, but of efficiency in comedic writing.

Such messy convictions about creative decision making has left me questioning the function of the series as a whole – what is trying to be accomplished with ‘Floors Apart’? Is it a fly-on-the-wall documentary style observational drama? Is it trying to show real people and real stories with real issues? All whilst evading the reality of their hardship? Or is it just for a bit of a laugh? If so, why use serious psychosocial struggles to attain that funny bone? And why are there so many cyclical arguments that don’t serve the humour? The work hasn’t figured out what it is and neither have I.

Fortunately, the piece is peppered with some enjoyable performances. Despite the insufferable melodrama of Floor 5, Jackie Jones and Jay Podmore demonstrate an admirable thoroughness and precision. Likewise, Ryan K Byrne brings a nuance to performance. Floor 3, performed by two of the three series creators Callum Forbes and Dan Hubbard (with other creator Adam Leyland presumably writing/directing) is probably the most well-constructed episode, as here the meandering and directionless nature of the work is utilised to great effect as said waywardness is manipulated to be the point of the scene, keeping us engaged. It’s a shame the other episodes in the piece don’t engage with the audience as much.

A radio drama about people in rooms, listened to by people in other rooms, that has failed to read the room – this piece expectedly leaves you feeling claustrophobic and suffocated by the repetitive monotony of everyday life in lockdown and the trauma it’s burdened by. What should be an escape is sadly an entrapment.