Il trittico (The Triptych) is the title of a collection of three one-act operas by Giacomo Puccini, with the link in the final work illustrating that each opera deals with the concealment of a death. Whilst intended to be performed as a set, it has been more usual to play individually or even pair with another one-act opera by another composer. So, it was refreshing that director Richard Jones brought them together again in this re-imagined production which offers a panorama of emotion and invention that is more than matched by the accompanying eclectic musical scores from the Orchestra of the Royal Opera House under the direction of Conductor Antonio Pappano, with the dark and foreboding Il tabarro and comic Gianni Schicchi bookending the heart-wrenching Suor Angelica. 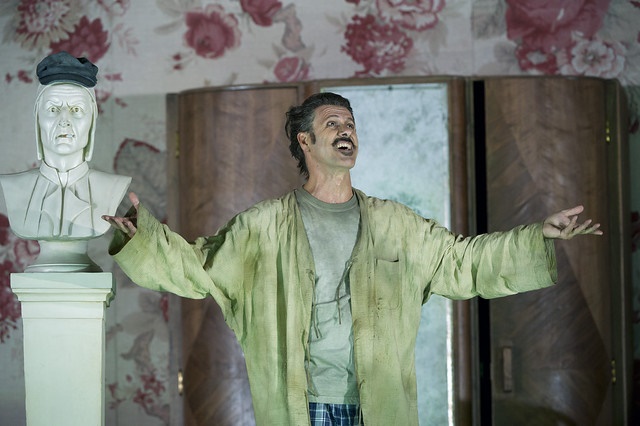 Il tabarro is a tale of jealousy, deception, and revenge on the river Seine where the boatmen’s life is harsh. Barge owner Michele (Lucio Gallo) suspects wife Giorgetta (Eva-Maria Westbroek) of an affair with one of his workforce Luigi (Aleksandrs Antonenko). There are no heroes: Giorgetta mourns a dead baby and yearns for passion and a settled life; Michele’s anguish at losing his child is intensified by the potential further loss of his wife. Whilst there were strong performances it was hard to believe Gallo’s dour Michele was capable of murdering the muscle-bound Antonenko. The piece had been cleverly reset to a gritty 1950’s Paris which was perfectly reflected in Ultz’s design, the only illumination coming from streetlights with the sun inevitably destined to sink into the Seine.

Suor Angelica is a tale of personal redemption which sees Sister Angelica (Ermonela Jaho) undergo her very own purgatory through her personal trinity as a catholic, a nun, and a mother, before news of her son’s death brings her to the depths of hell in more ways than one can imagine in this powerfully moving and emotional piece. Jaho captures the initial stoicism of her character well but was somewhat vocally challenged when her angst finally came to the fore. The piece had been intelligently set in a 1960’s sanatorium for young children, perfectly captured in its all too white starchiness by designer Miriam Buether, representing the worst of all punishments for Sister Angelica whilst providing the access to medicine that offers her the only way out.

After the misery comes the fun with Gianni Schicchi, a black comedy ensemble piece based on one part of Dante’s Divine Comedy , reset to a shabby, but most definitely not chic, post-war Florence by designer John MacFarlane, replete with a bust of Dante, where the greed and conniving of the relatives of the recently deceased Buoso Donati meets its match in the roguish Gianni Schicchi (Lucio Gallo) when they attempt to foil the romance between his daughter Lauretta (Ekaterina Siurina) and Rinuccio (Francesco Demuro). Strong performances from the ensemble cast with Gallo very much in his element whilst Siurina charmingly delivers one of operas most popular arias ‘O mio babbino caro’.

So with three very different operatic pieces and the most tenuous of connections, the ultimate glue is the music and with Antonio Pappano at the helm it was always going to work well with each work beautifully paced and every mood and emotion captured, and superbly topped off at the end (no pun intended) by the exceptional accompaniment to the fast-paced and frenetic dialogue of Gianni Schicchi without detracting from the audibility or timing of its superb comic performance: bravo!

‘A panorama of emotion and invention’